642. How To Make Your Customers Happy. 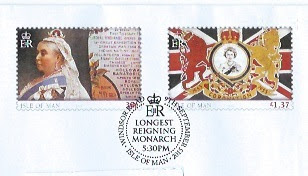 A couple of days ago, I received a cover from Isle Of Man Stamps And Coins which contained a brochure which publicised its "Longest Reigning Monarch" issue. I noted that, unusually, it had postage stamps attached to it - 2 values from the set issued to commemorate the 60th anniversary of the coronation of Queen Elizabeth II - and, excitingly, a cancel which commemorated the achievement of Queen Elizabeth II in becoming the longest reigning British monarch in history.
Then I examined it in more detail and found that both the stamps and the postmark were actually preprinted on the cover. I was not at all disappointed. I appreciated greatly being sent this unusual item of postal stationary rather than th usual run-of-the-mill envelopes which are used to send out publicity and will be delighted to add it to my Isle Of Man collection. And for once it cost me nothing. I felt like a very happy customer of The Isle of Man Post Office and thought -"That's the way to do business". 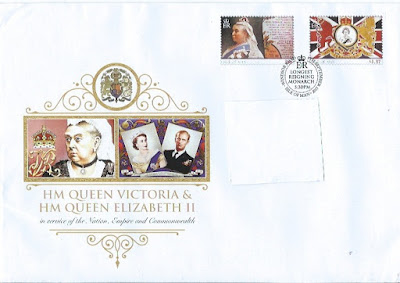 In the same post I received my latest shipment of stamps of the Commonwealth countries of southern Africa which I obtain from an excellent South African dealer who trades on internet auction sites as 15dsouth. As well as being a reliable and fair-priced seller he takes a lot of trouble in sending the items he sells to his customers in interesting covers with a range of up-to-date stamps on them.
My latest new issues were sent in a particularly interesting cover as shown below and I was interested to find that he had used 2 stamps from the former home land, Venda, on the cover together with a range of South Africa stamps thus producing a splendid combination cover. I did not realise that the stamps from the 4 "home land" territories were still valid for postage in South Africa.
Needless to say 15dsouth had ensured that he had produced a very happy customer by taking the trouble to put this cover together. That's the way to do business. 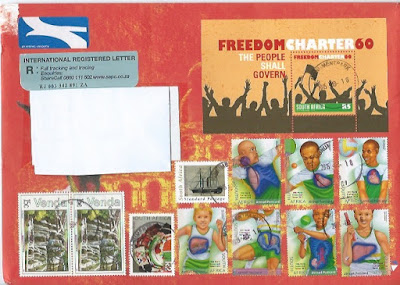 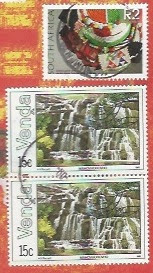 Finally, again in the same postal delivery, I received the most recently issued stamps of Nigeria from the British dealer Nigel Haworth. Nigel frequently is able to provide modern Commonwealth new issues that often other dealers fail to obtain. He retired a couple of years or so ago which was a terrible blow as I feared I would never be able to obtain again some of the rarely available new issues that he had provided me with in the past.
But he did not stay away for long and I was pleased to start to receive his price lists again, most of which usually include a few almost-impossible-to-obtain new issue gems. My latest package contained the rarely offered Nigeria Centenary of Independence set and imperforate miniature sheet of 2014 (see Blog 499O) as well as the pair of stamps released as a joint issue with Phillipines (see Blog 368). Again, I was a very happy customer. Offering rare and hard-to-obtain stamps to your customers rather than rubbish churned out by exploitative agencies - that's the way to do business!

Moving on, I now depict the set of 4 stamps issued by the Kiribati postal administration which commemorated the Singapore 2015 philatelic exhibition and which was mentioned in Blogs 602 and 641. Rating:- *** 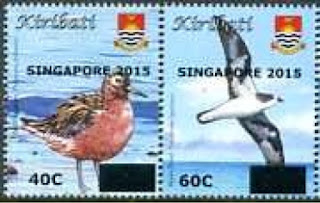 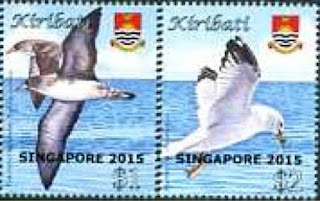 Isle Of Man Post Office will issue a set of 6 stamps on 28 September 2015 on a somewhat unusual subject - the 150th anniversary of the Isle Of Man Companies Act. It is not a subject that has broad appeal to stamp collectors but at least the subject has important local relevance although whether it was necessary to issue as many as 6 stamps on the subject is debateable. The stamp designs, by Emma Cooke, are probably a little over-busy but do at least tell a story of local interest. The issue was lithographed by BDT International Security Printers. Rating:- ***. 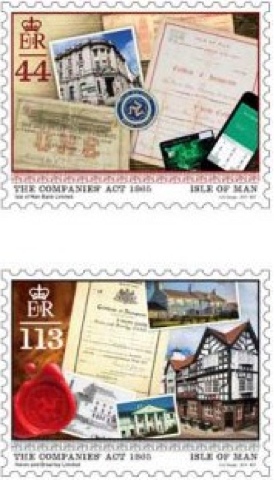 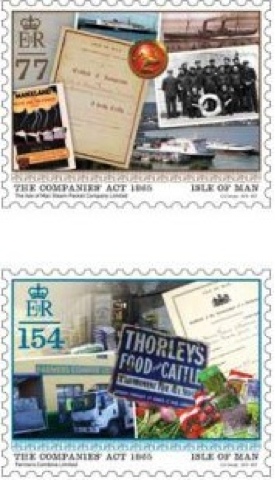 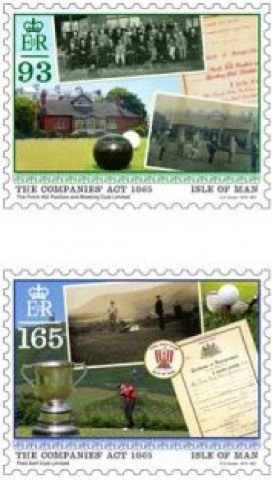 Recently offered for sale on an Internet auction site was a set of 2 sheetlets (each of 4 different stamps) with 2 accompanying miniature sheets on the subject of "Owls of Central America and the Caribbean" originating from the philatelic agents for St. Kitts. A number of different species are depicted on these items though there is only one species of owl which is actually to be found on the island - the Burrowing owl.
I find these sort of items to be very annoying - doubtless there a large number of collectors who specialise in stamps which depict owls but I cannot understand why people want to buy items which depict creatures which have no connection with the territory whose name appears on the "stamps" - don't they sense that they might be being exploited? Rating:- 0. 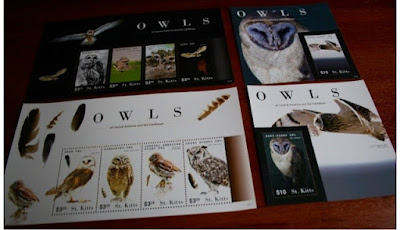 And on the subject of irrelevance of subject matter to the country whose name appears on the philatelic item, IGPC has announced that it will soon release "new issues" on the subject of the visit of Pope Francis to The United States. It seems to me that this is a subject of relevance to the postal administrations of only 2 territories - The USA and The Holy See - and I can not imagine what possible reasons other countries would have for allowing philatelic products to be released in their names apart from perceived financial profit for their philatelic agency related to a popular subject. Despite the efforts of the Stanley Gibbons Catalogue editor (see Blog 640) and many others, the cynical release of numerous irrelevant issues appears to continue unabated. 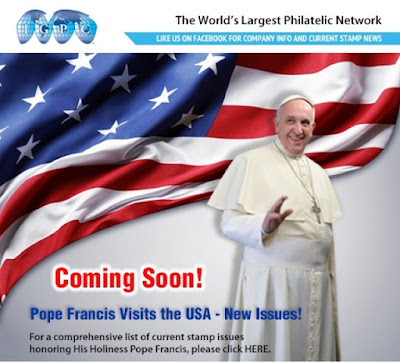