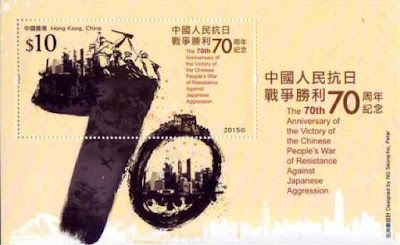 The latest issue from Hong Kong Post was released on 2 September 2015 and took the form of a $10 miniature sheet which commemorated the "70th anniversary of the Victory of the Chinese People's War of Resistance Against Japanese Aggression".
The dramatic design was by Peter Ng Seong-ho and the item was lithographed by Cartor. Rating:- *****.
History is a wonderful thing with viewpoints changing as time goes by. With the return of Hong Kong to China's sovereignty in 1997, the view of history on Hong Kong stamps changed for ever. So while the 70th anniversary of the defeat of Japan at the end of World War II is now commemorated philatelically as a victory of the "Chinese People's resistance", back in 1946 when the British regained Hong Kong from the vanquished Japanese forces, the stamps to commemorate the event were much more to do with the rebirth of the British colony after the defeat of Japan by The British Empire, as represented by the large portrait of The King Emperor George VI, than the role of the Chinese forces in the War. 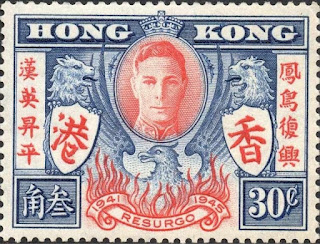 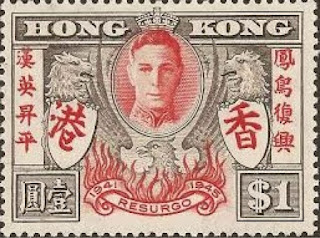 With the current ongoing conflicts in the Middle East, it seems that the main theme of many stamps issued during 2015 reflects this constantly present sense of war and unease by commemorating many important conflicts of the past - The First World War, The Battle of Britain, the end of the Second World War, the Battle of Waterloo and now, even more in the past, the 450th anniversary of the Great Siege of Malta. Ironically the publicity put out by MaltaPost about a new miniature sheet to be released on 7 September 2015 states "The battles of 1565 in Malta were the climax of the longstanding hostility between the Christians and the Islamic Ottoman Empire for control of the Mediterranean".
The issue celebrates the 450th anniversary of the end of The Great Siege and depicts the work "The Allegory of the Triumph of the Order" by Mattia Preti which is in St. John's Co-Cathedral in Valletta.
The issue was designed by MaltaPost plc and lithographed by Printex. Clearly this issue celebrates a significant anniversary of one of the most important events in Maltese history and clearly MaltaPost felt that a high face value was required to do it justice - €4.25c! Rating:- ****. 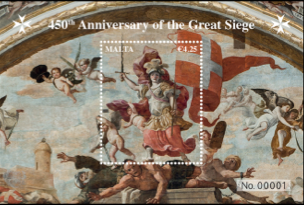 The Cyprus postal administration is planning to release 3 excellent stamp issues on 14 September 2015.
The first is a set of 4 stamps on the subject of Castles of Cyprus which are actually located in Turkish-occupied northern Cyprus. The issue was designed by Prodromos Apostolou and lithographed by Giesecke and Devrient Matsoukis SA of Greece:- ****. 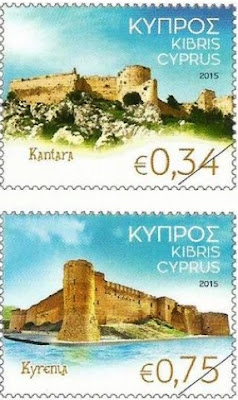 A second set of 4 interesting stamps on the subject of Traditional Cypriot folk art will also be released on the same day. The stamps were designed by Theodoros Kakoullis and lithographed by Giesecke and Devrient Matsoukis SA of Greece. Rating:-****. 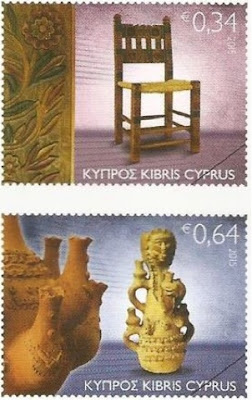 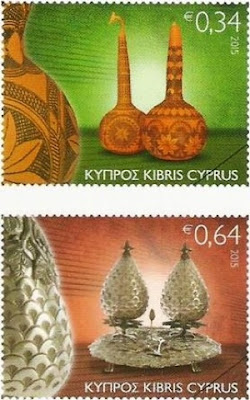 Finally, a single stamp will also be issued on 14 September 2015 to commemorate the 150th anniversary of the International Telecommunications Union. The very interesting stamp depicts early pioneers of radio communications and is one of my favourite stamps issued during this year to commemorate this particular anniversary. The stamp was designed by Nicosia Ierodiaconou and lithographed by Giesecke and Devrient Matsoukis SA of Greece. Rating:- *****. 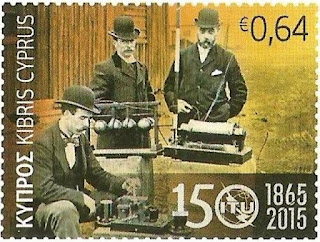