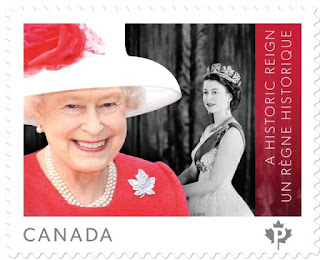 We can now add Canada Post to the list of postal administrations of Commonwealth territories which have issued stamps to commemorate the achievement of Queen Elizabeth II in becoming the longest reigning monarch of Great Britain and other Commonwealth realms, including Canada. One self-adhesive stamp was issued on 9 September 2015 and printed in a booklet of 10 in lithography by Lowe Martin. As with Royal Mail's issue, although there was a great deal of preceding speculation that Canada Post would commemorate the event philatelically no announcement that such an issue would be released was made until the day of issue itself. Rating:- ****.

I have now obtained my specimens of the first "Post and Go" stamps (with the added "Envoy House" inscription) to be produced by a Guernsey-situated kiosk, GG02. See also Blog 619. 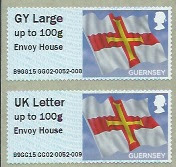 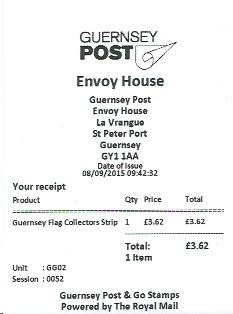 The Royal Mail "Post And Go" kiosks A006, A008 and B001 at Autumn Stampex 2015 in London  (16 - 19 September 2015) will dispense "Collectors' strips" of 6 different values printed on the Machin Head design with the additional inscription "Queen Elizabeth II Longest Reign". They will only be sold for the 4 days of the exhibition and at a single site and therefore I view them as exhibition souvenirs with postal validity rather than as postage stamps but Post And Go enthusiasts will probably want to buy a strip as well as anyone forming a collection of "Longest Reign" stamps and philatelic collectables.
Kiosks A007 and B001 will also dispense the previously issued "Heraldic Lions" labels without any of the other Heraldic beasts designs included in the strips and these will not have any additional inscriptions. The "Sea Travel" labels (see Blog 615) will be issued on 16 September 2015 and sold at the exhibition without additional inscriptions from kiosks A006, A007, A008 and B002. Rating:- 0.

The South African Post Office issued a very interesting and colourful sheetlet of 10 different self- adhesive stamps on 12 August 2015 on the subject of "Jellyfish of South African Waters". A great issue. Rating:- *****.
I may be wrong but I do not think that the South African Musicians issue originally announced for release on 2 July 2015 has yet been released. 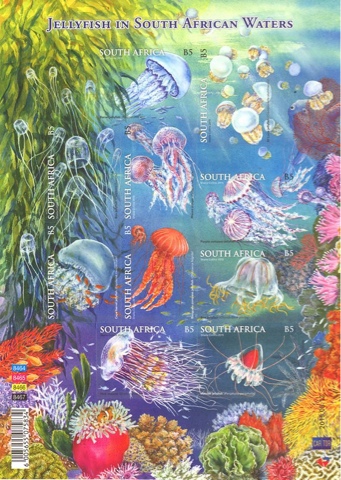