434. Surcharges From Zambia, Tanzania And Guyana.

I have recently obtained from Nigel Haworth a number of interesting Commonwealth new issues which  I have not seen offered for sale by any other source and which again demonstrate what a marvellous dealer he is in being able to supply collectors with some of the most problematical new issues which appear from various Commonwealth countries.
The stamp depicted above is one which I had not previously thought about since it was reissued as a new currency K3.80 surcharge on K2475 on K3300 (as shown below and reported in Blog 342) but I had not realised that the K2475 on K3300 was not in my collection. It appears that the K2475 value is very rare and has not been offered for sale before so this stamp without the second surcharge is of great interest. 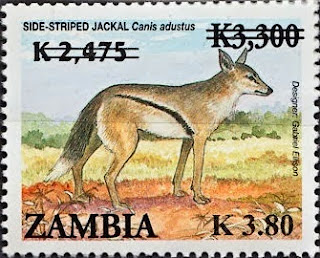 Also of interest is the K1.50 on K50 surcharge, reported in Blog 411, which is sold as a se-tenant block of 4, one of which (at the right hand end of the penultimate row) has a much larger space between the K1. and the 50 in the surcharge:-

Nigel Haworth now also has 13 of the provisional hand-stamped surcharges produced by Guyana, some of them applied to stamps which were originally issued as long ago as the 1960's. Some have the surcharge applied in blue ink and some in black. Steven Zirinsky also offers a number of these hand-surcharged stamps on his website but these two dealers have different items for sale. Of course all of them are interesting and I am putting together a small representative collection for myself of the cheaper items. [See also Blogs 255 and 263].

One final item to mention which Nigel Haworth is selling which I have not yet seen being sold elsewhere is the latest Bangladesh stamp the date of issue of which is not yet known to me. It commemorates the 2014 National Day and anniversary of Independence:-

Jersey Post's  next issue is a striking set of 6 stamps and an accompanying miniature sheet which will commemorate the 50th Display season of the Red Arrows. Although 4 of the photographs used in the designs were taken by a local photographer during a display in Jersey in 2012 I find it difficult to feel that the issue has much of a direct relationship to the island and given the large outpouring of issues from Jersey this is one of the sets I shall not be adding to my collection which I vaguely regret since it is an impressively designed issue. Still, that's £8.14 (plus tax) that will stay happily in my pocket. The date of issue is 11 July 2014:- 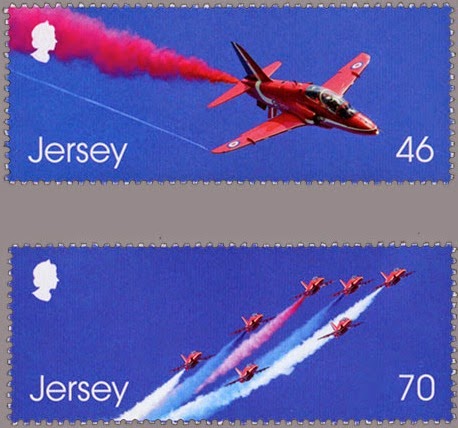 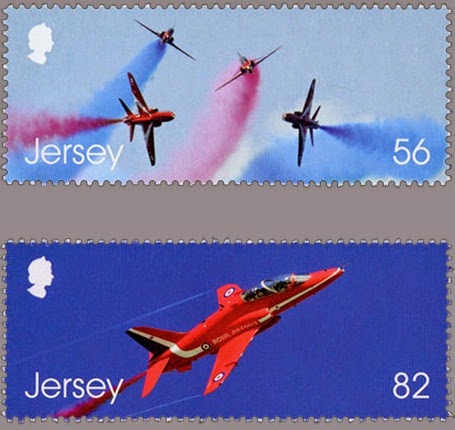 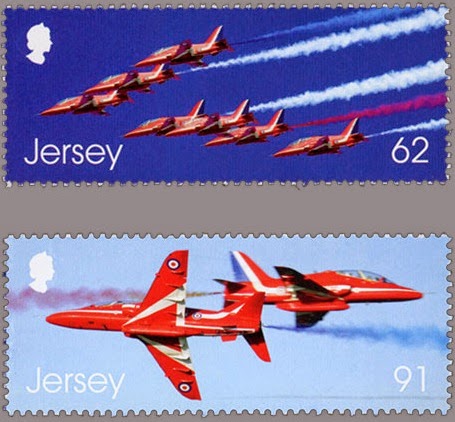 Having already issued 6 stamps and 1 miniature on 6 May 2014 on the subject of "Remembrance" and depicting poppies (face value £7.07p excluding tax) presumably linking the issue to the centenary of the beginning of the First World War (although the date of issue also links the set to the date of liberation of the island from Nazi rule at the end of the Second World War), Jersey Post will release another set of 6 stamps and 2 miniature sheets (total face value of £9.14p excluding tax) on the actual anniversary of Great Britain's Declaration of War on Germany - 4 August 2014. This is undoubtedly an interesting and attractive set, designed by Martin Hargreaves, and strives to illustrate the involvement of the people of Jersey in the war and so, despite the cost, I shall be adding this issue to my collection:-

I have seen it reported (Postage Labels Of The UK website by Brian Sinnott) that Jersey will finally install a Post And Go machine actually on the island itself - at the Head Post Office in Broad Street in St. Helier - by the end of August 2014. The machine will be numbered JE002 and production of the stamps by a machine which is sited in Jersey rather than at philatelic exhibitions in other countries where the stamps have no postal validity means that the status of the products is raised from that of exhibition souvenirs to true postage stamps and so when JE 002 starts work I shall attempt to obtain stamps produced by the machine.
On 29 June 2014, Sri Lanka issued a single stamp to commemorate the bicentenary of the introduction of Methodism in the island:- 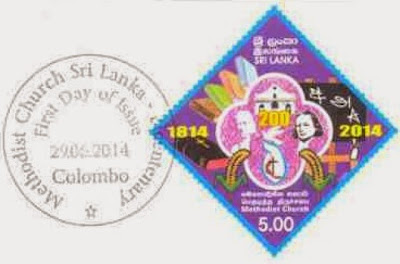 Malta Post will issue a new stamp on 9 July 2014 on the subject of "Euromed Postal - The Mediterranean Sea" which will be part of a joint issue with Cyprus, France, Egypt, Greece, Jordan, Lebanon, Libya, Morocco, The Palestinian Territories, Slovenia and Syria. All of these territories are part of the Postal Union For The Mediterranean (PUMed) which was established in 2011 with its headquarters being situated in Malta. Other member states include Croatia, Mauritania, Monaco, Portugal, Tunisia, Spain and Turkey.
The stamp was designed Amany Ahmed Ali of Egypt and lithographed by Printex Malta:- 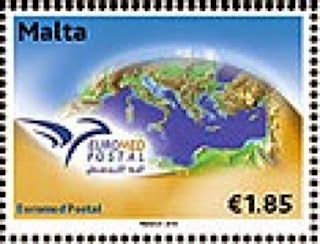