So great is the variety of Royal Mail Post And Go stamps which have been produced in the last two or three years that I have completely lost the ability to understand the large amount of different items which have appeared on the market - they're starting to become the philatelic equivalent of the Schleswig-Holstein Question - there are only 3 people in the world who can follow what is happening with them - one died, one went mad leaving one sane survivor who has forgotten what he knew about them in the first place.
I have largely solved my problem with the items by giving up collecting all the Post And Go items which are sold as Exhibition or Museum souvenirs since they are not freely available to the general public for use as postage stamps on ordinary mail. My sanity and financial stability have thereby been saved.

On 7 July 2014,  Royal Mail issued a pack of 5 Post And Go stamps with the values expressed as "Service indicia". These particular items were produced in photogravure with the inscription applied as a "themal overprint" by International Security Printers in the 2nd class domestic rate (2L), 1st class domestic rate (1L), 2nd class large letter rate (2LG), 1st class large letter rate (1LG) and in the airmail letter rate (A Letter).
The 2 illustrations above compare the text of the 2L and 1L rate stamps produced by a NCR machine in the Pinfold Street post office in Birmingham (left hand stamp) and the same values from the Philatelic Bureau-supplied pack and the differences between the two types are clearly identifiable.
The security codes on the post office machine stamps are both MA13 while the pack stamps are MA12 for the 2L and 2LG values and no code for the 1st class and other values. The remaining 3 stamps from the pack are depicted below:-.

Following on from the British Postal Museum and Archives, a second museum is to have a Post And Go machine established there - the Portsmouth Naval Museum which already sells Universal Mail United Kingdom Bespoke strips of 5 Tourist stamps. Twelve different stamps will be supplied from the machines - in the Machin Head design and the Union Jack design. The stamps dispensed by the machine will bear the added identifying inscription "The NMRN"and will be available from 28 July 2014.
As these are only available from a single location I think of them as museum souvenirs rather than true postage stamps so I will fortunately be able to omit them from my collection.
As I wrote above I am also not collecting Post And Go labels sold at various exhibitions and nowhere else. I have not therefore made any attempt to obtain the various products sold at the spring Stampex, held from 19 to 22 February 2014, which appears to have given us 18 new varieties of Post And Go (6 x Machin Head with exhibition inscription (with MA13 code and with no code making 12 in all) and 6 x Hytech machine-printed Spring blooms):-


There have also been Post And Go dispensing machines set up at other philatelic exhibitions including the 85th Scottish Congress in Perth where an inscription was added to the labels for the occasion:-

And other exhibitions which have been host to the Post and Go machines so far this year are those held at Salisbury and York which did not warrant special inscriptions but the July York meeting still managed to produce new varieties of the Europe 20g, Europe 60g and Worldwide 60g values. There may have been other varieties which I have missed from these meetings but I am beginning to feel the madness of the Schleswig Holstein Question coming on as I try to understand what has emerged in the last few months.
Still to come are new versions of the BPMA labels which will be available in August 2014 with a new inscription which will coincide with a new exhibition at the British Postal Museum which marks the 80th anniversary of the first British inland mail. It seems that these labels will be in the 1st class Machin Head values and the 2nd class values which I think must mean that there will be another 8 labels produced as a result.
Also, from the 7 to 17 August 2014, Post And Go labels will be produced at the Philakorea philatelic exhibition with the inscription "Philakorea 2014/World Stamp Expo" and will be produced in the Machin Head and Union Jack designs resulting in another 12 new varieties and if the precedent of the Australia 2013 Philatelic Exhibition is followed, then variants of these items will also be sold from the Philatelic Bureau in Edinburgh which means that this exhibition alone will result in a further 24 new Post And Go labels. Exhaustion sets in.
Turning to another form of madness,  another 60 "stamps" (15 sheetlets of 4 different designs) and 15 miniature sheets have been produced by the Stamperija philatelic agency on behalf of the Mozambique postal service. The subject of this massive emission is Fauna and species from various parts of the world are featured - there are even a few of the featured species which are actually to be found in Mozambique itself. The subsets are on the subjects of Giraffes, Lions and Leopards, Owls, Turtles (though it looks to me as though the depicted creatures are actually tortoises), Hippopotami and Rhinoceroses, Elephants, Butterflies (2 subsets), Pandas, Komodo dragons, Water birds, Koalas, Kangaroos, Seals, Penguins. The date of issue is stated to have been 30 April 2014:- 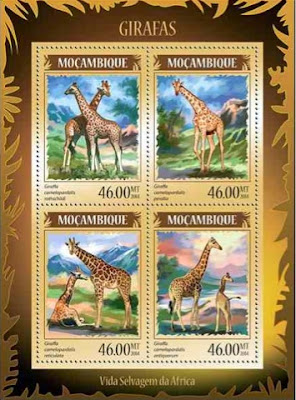 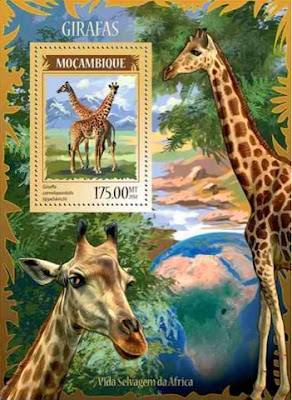 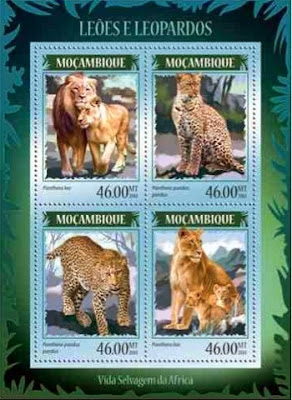 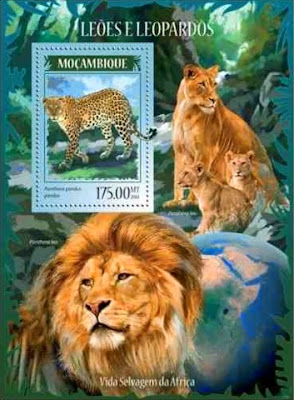 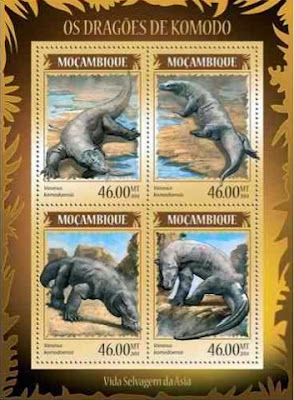 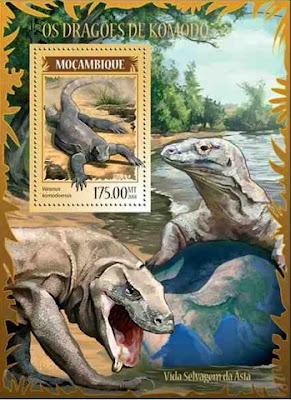 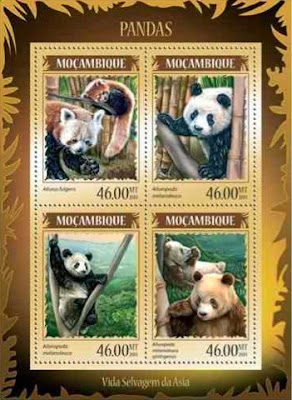 After all this, I feel I need to find myself a new nice and restful hobby.