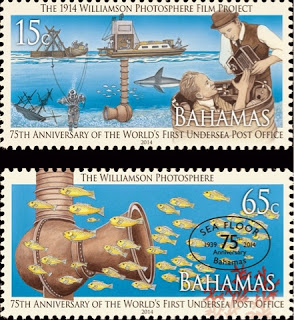 Bahamas will issue a fascinating set of 4 stamps on 16 August 2014 to commemorate the 75th anniversary of the world's first undersea post office. The post office, situated in an underwater tube which could extend to depths of 200 feet below the water surface, operated from 1939 to 1940. The device was invented by Charles Williamson of Norfolk, Virginia and called the "Photosphere" and used by his photographer son, John Ernest Williamson, to take photographs of undersea life.
When the Bahamas Post Office agreed to the opening of the undersea post office it was named "Sea Floor Bahamas" and its rather limited number of customers were able to send items from there which received a Sea Floor cancellation.
The set was designed by Derek Miller and lithographed by Lowe Martin. Derek Miller's artistic style fits in rather well with this issue as it seems to evoke the era when this novel post office was in existence. 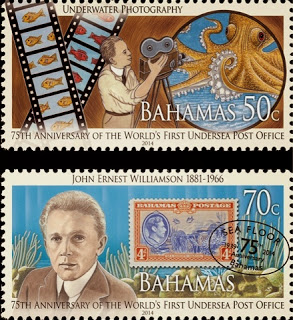 Previous Blogs (including Blog 436) have detailed recent Bahamas issues and what emerges from them is that this territory, particularly since it took on Pobjoy Stamps/Creative Direction as its agents and advisers on stamp preparation and production, takes its stamp issues seriously and has, in recent times, released issues which tell its citizens and foreigners alike about the country and notable developments and institutions there. Unlike so many territories the issues often do not just depict a theme picked out of the air but rather are linked to something about Bahamas that the country wants to tell the world about. The Pobjoy Stamps website gives very detailed information about these issues, more than I can recount here, and is very well worth visiting to read in-depth accounts of each individual issue of Bahamas and the agency's other client territories.
Bahamas' Seafloor post office has previously appeared on stamps. It was featured on the 5/- value of the definitive set released on 7 January 1965 which was reissued on 25 May 1966 with surcharges applied in decimal currency. The design was then used as the $1 value of the definitive series issued on 25 May 1967 and the value was later reprinted on whiter paper with a release date of April 1971:- 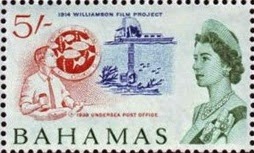 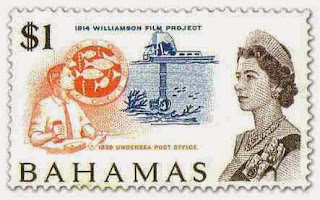 Less spectacular than an underwater post office, but still fun for tourists and stamp collectors, was an underwater post box I discovered at Coral World, an aquarium and tourist attraction in Bahamas which I visited in 1992. Pleasingly, posting mail in this box did not involve diving underwater but merely walking into a section of the aquarium built under water but despite the lack of effort the tourist was still rewarded with a bright red cachet applied to their postcards, "CORAL WORLD (BAHAMAS)  UNDERWATER OBSERVATORY" with "MAILED UNDERWATER" at the centre of the double ring. There was an ornamental bright red post box in which to post one's mail. After posting at Coral World the mail items were entered into the Bahamas postal system and, as shown, my souvenir, dated 10 March 1992,  received a slogan postmark:- "SAVE OUR PARROT' with a profile of a parrot's head to the left of the slogan:- 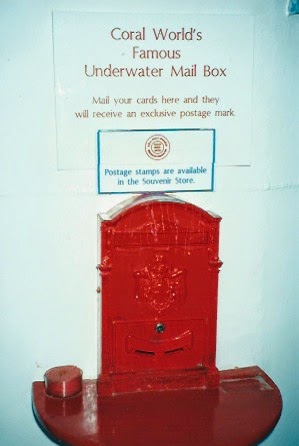 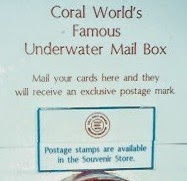 I have no idea whether the Coral World post box is still in place.

As mentioned in Blog 340 , Vanuatu Post issued a miniature sheet on 11 December 2013 to commemorate the 10th anniversary of the underwater post office located at Hideaway Island, a tourist resort. The post office is situated a few metres under the sea and those diving down to it can send waterproof postcards from there:- 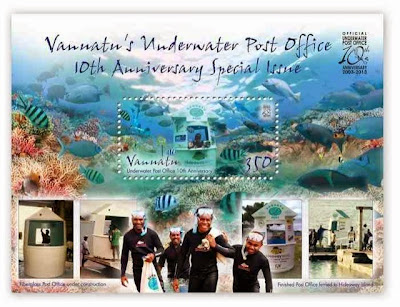 In the same blog, I depicted Vanuatu's 2013 Christmas stamps, issued on 6 November 2013, one of which depicted a comic Father Christmas diving down to post a letter at the underwater post office. He is accompanied by a perplexed-looking, diving reindeer:- 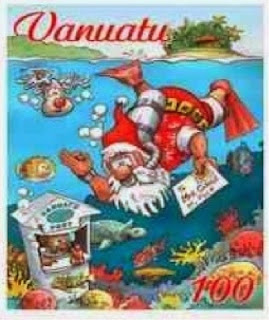 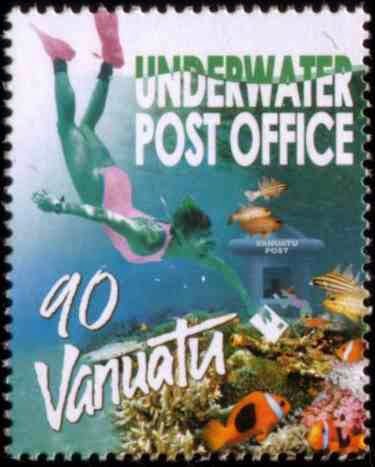 and a set of 4 stamps and accompanying miniature sheet were issued on 30 January 2004 as a follow-up to the first issue:- 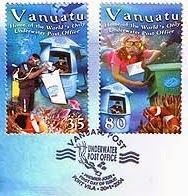 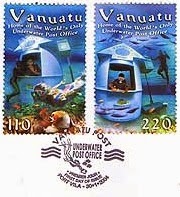 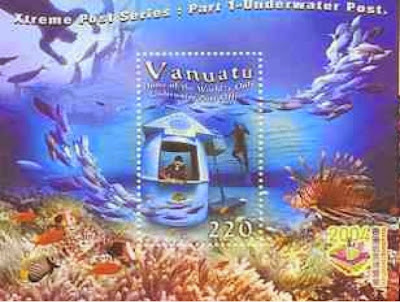 A further set of 4 free-form, self-adhesive stamps which marked the underwater post office's 5th anniversary was issued on 30 July 2008:- 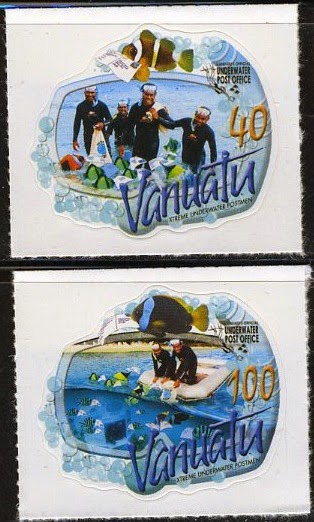 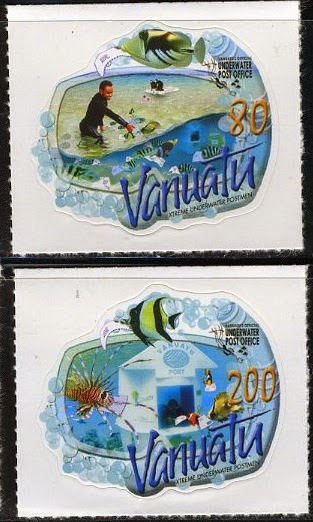 On the subject of the sea, or beaches at least, Norfolk Island issued a second set of 6 stamps on 7 May 2014 on the subject of local shorelines. This set was designed by Mary Pavicich and lithographed by Southern Colour Print:- 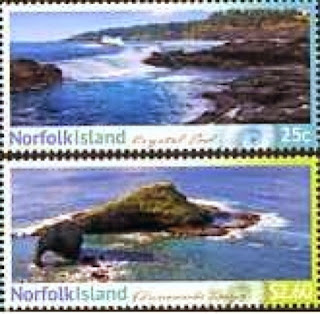 Five stamps were issued on 26 May 2014 on the subject of "Artwear" - clothing made locally from recyclable materials, natural fibres and various forms of cloth. Again the stamps were designed by Mary Pavicich and lithographed by Southern Colour Print.
On 22 August 2014, Norfolk Island will release 2 stamps as a joint issue with Australia. 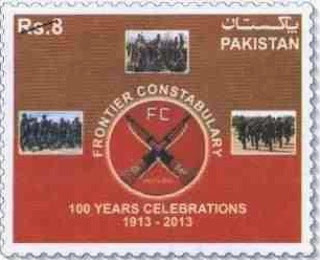 Among Stamperija's latest products are 9 sheetlets (each of 4 different "stamps") and 9 accompanying miniature sheets which are inscribed "Solomon Islands". The date of issue is said to have been 10 March 2014. This time the subjects of the subsets are Mick Jagger, Birds of Great Britain (why? - doesn't Solomon Islands have enough birds of its own to depict?) Fire engines, Yuri Gargarin, Marine art, Moscow 2013 Athletics Championships, Sebastian Vetel, Garry Kasparov and the French artist Eugene Delacroix:- 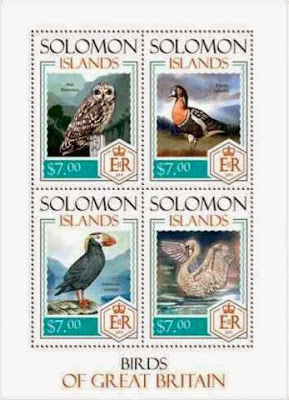 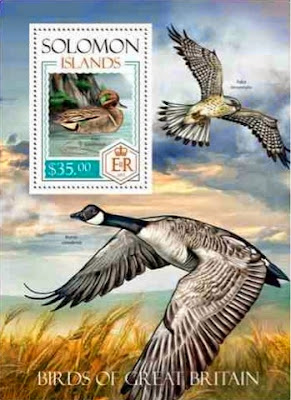 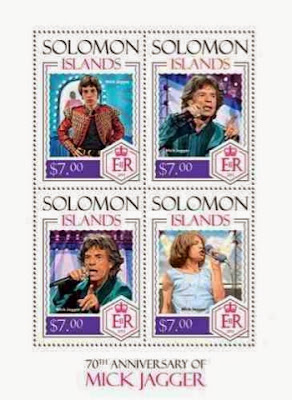 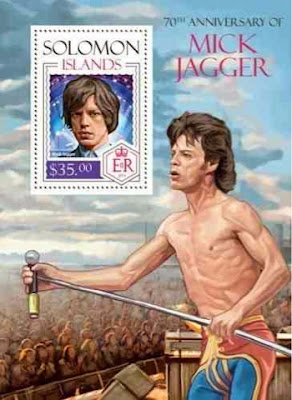