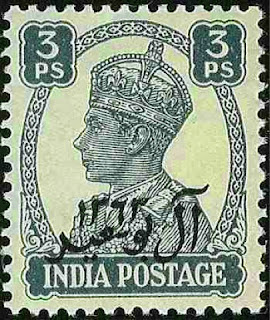 The Portuguese took over control of Oman in 1507 as a staging post for their far eastern spice trade. In 1646, as a means of undermining the power of the Portuguese, the local Al Ya'ribi tribe agreed to a treaty with the British East India Company which guaranteed trading as well as legal and religious rights for British traders in the area. Four years later, in 1650, Imam Sultan bin Saif rose against the Portuguese and expelled them from the area.
The Omanis continued to trade with The East India Company without the establishment of more formal relations until the end of the 18th century when the threat from Bonaparte and the French persuaded the British government to agree two treaties with the Omanis in 1798 and 1800 whereby the two sides dealt with each other on equal terms. The British provided naval protection for continuing trade in the area and helped the coastal rulers in their struggles with the tribes of the interior. The Omani Al Bu Sa'id leaders had their own Trans-Indian Ocean Empire stretching from Oman down to the coast of East Africa and Zanzibar. The two powers signed further treaties of "Peace, Friendship and Navigation" in 1891, 1939 and 1951.
Although Oman was an independent state and not a protectorate, the British exerted great influence in the territory and they pressed the anti-slavery programme on the Omani rulers which was economically disastrous for Oman. In a succession crisis which followed the death of Sa'id Ibn Sultan, the British intervened and split up the Omani Empire into 2 territories - one in Arabia and the other in Zanzibar and East Africa.
Successive Sultans of Oman were provided with British military support and after the death of Sultan Faisal Bin Turki in 1913 another succession crisis arose in which the Imam of Oman refused to recognise the new sultan and it was only the presence and action of British troops which prevented tribesmen from the interior under the Imam from sacking Muscat and toppling the Sultan.
In the 1950's the British helped the Omanis repel encroachments from Saudi Arabia, which were supported by the the interior tribes, into Omani territory. The British provided Sultan Said Ibn Taimur, who had come to power in 1932, with support so that the power of the interior tribes was finally overcome and he became so dependent on the British that even though Oman did not have a formal position in the British Empire, it had all the appearances of being a dependent territory of the British.The territory stagnated and eventually Sultan Taimur was deposed in 1970, after ruling for 38 years, and was succeeded by the present Sultan, Qaboos Ibn Said.
An Indian post office was opened at Muscat on 1 May 1864 and Indian stamps were used there until December 1947.
On 20 November 1944 a set of 15 Indian definitive stamps was overprinted "Al Busaid 1363" in Arabic script to commemorate the Bicentenary of the Al Busaid dynasty. Twelve lower values (3ps, half anna, 9ps, 1A, and half As, 2As, 3As, 3 and half As, 4As, 6As, 8As ams 12As), and 3 higher values (14As, 1r and 2Rs) comprised the set (above and below). Ten official stamps were also issued by the overprinting of Indian official stamps.
After the granting of independence to India, a Pakistani postal administration was established in Oman from December 1947 and Pakistani stamps were used in the territory until 31 March 1948. Subsequently a British postal administration was set up and operated from 1 April 1948 until 29 April 1966. 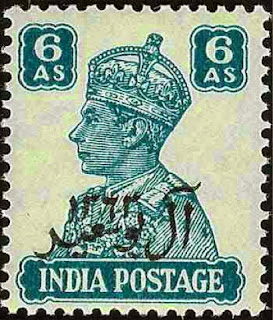 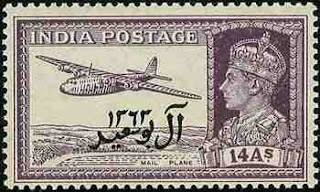 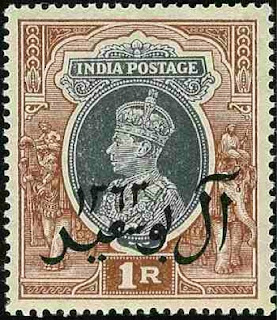 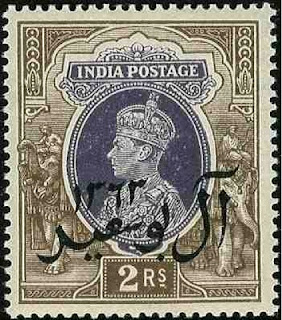 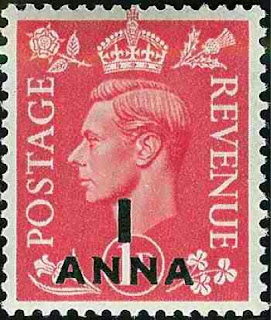 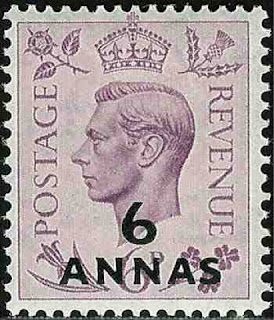 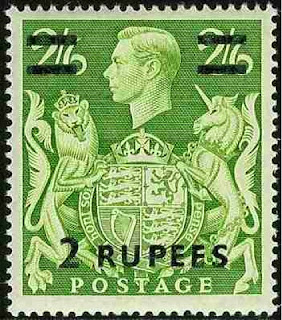 On 26 April 1948, the pair of British stamps which commemorated the Silver Wedding anniversary of King George VI and Queen Elizabeth was  issued with surcharge applied:- 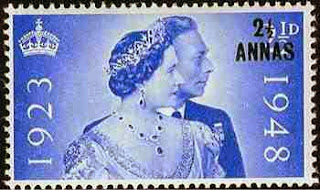 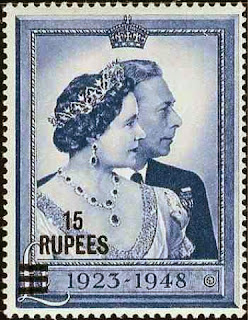 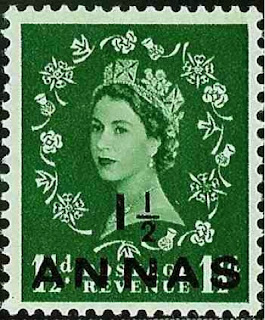 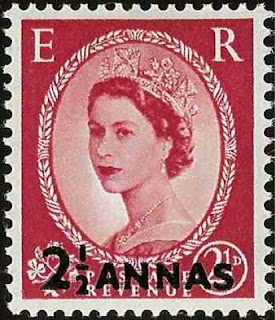 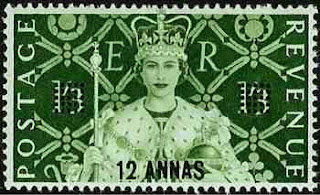 The 2/6d and 5/- Waterlow-printed British "Castles" definitives with 2R and 5R surcharges applied were issued in 1955 and 1957 respectively and later on varieties of the surcharge were released as well as reprints of the stamps by De La Rue:- 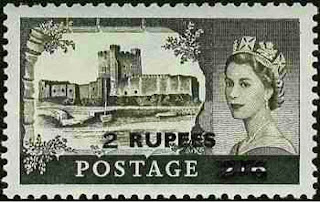 A new currency of 100 naye paise to 1 rupee was introduced in 1957 and the "Wilding" definitives were reissued, (this time with St. Edward's Crown watermark), with surcharges in the new currency with 11 values in the range 1 np to 75np.
The set of 3 Great Britain stamps which commemorated the holding of the World Scout Jubilee Jamboree in Sutton Coldfield was issued in Muscat on 1 August 1957 with 15 np, 25 np and 75 np surcharges applied:- 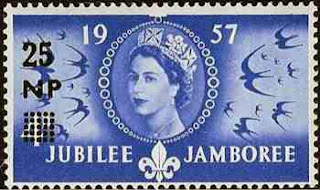 Between 26 April 1960 and 1961, surcharges were applied to Wilding portrait definitives and the 2/6d and 5/- "Castle" definitives of Queen Elizabeth II with watermark Multiple Crown. Surcharged British stamps continued to be used in Muscat until 29 April 1966 when the Oman Post Office took over mail services in the Sultanate and issued a new 12 value definitive series on 30 April 1966. The designs comprised 5 small designs depicting the national arms and 7 larger pictorial stamps.
Stanley Gibbons' listing of Muscat And Oman's stamps in the Commonwealth Catalogue ends with the last Elizabeth II definitive set although it is arguable that, even if only on an informal basis, Oman remained part of the British Empire at least until 1970. 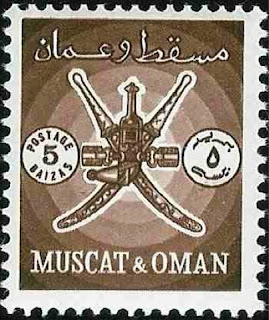 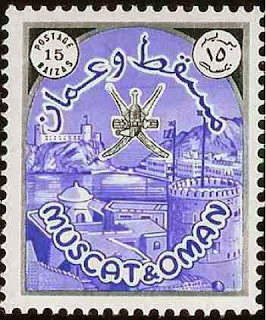 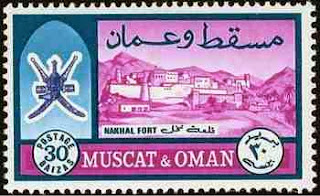 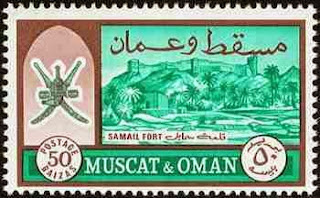 As a footnote to all this, we might note that Oman issued a stamp on 25 May 2013 which marked the 35th anniversary of diplomatic relations between Oman and The People's Republc Of China. This is similar to the numerous stamp issues released by various countries in recent years to  commemorate their close relations with The People's Republic (see Blog 301). In the 21st century Oman's stamp of 2013 reminds us of how the world has moved on since the days when surcharged British stamps were used in the country.