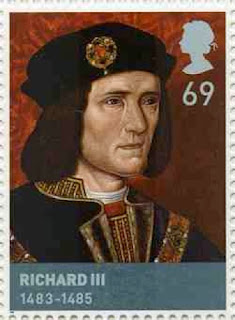 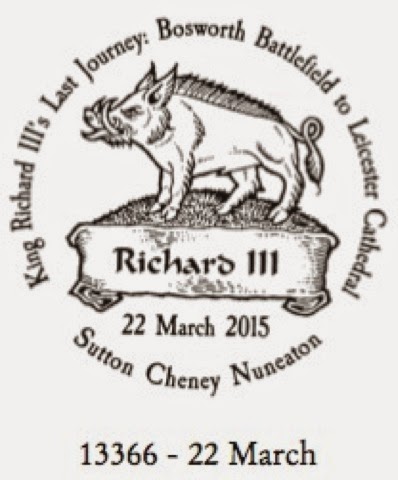 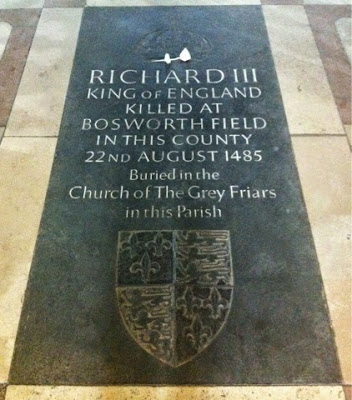 2015 should be a busy year for Royal Mail stamp issues since a number of extremely significant anniversaries occur during the year - the Bicentenary of the defeat of Bonaparte at the Battle Of Waterloo and his subsequent exile on St. Helena, the 800th anniversary of Magna Carta, the 750th anniversary of the first English parliament, the 500th anniversary of the granting of the Royal Charter to Trinity House Lighthouse Authority, the 600th anniversary of the Battle of Agincourt, the 150th anniversary of the Qualification of Britain's first female medical doctor, the 150th anniversary of the Publication of Alice In Wonderland by Lewis Carroll and the Centenary of the Second Battle of Ypres. Just how many of these important anniversaries Royal Mail will choose to ignore to make way for the sort of trite subjects which have been chosen to feature on British stamps in recent years one can not say.
And then there are the events which will take place - on 10 September 2015 Queen Elizabeth II will become the longest reigning ruler of Great Britain in history as she passes Queen Victoria's record which will have stood for 104 years - no doubt there will be a fully justified philatelic commemoration of that remarkable event.
We may also wonder if Royal Mail will issue stamps to commemorate another royal event - the funeral of King Richard III, the villainous monster who was overthrown by the revolution of Henry Tudor in 1485 and whose body was found buried under a car park in Leicester in autumn 2012. If it has not taken place before the end of 2014, the funeral in Leicester Cathedral will be a notable event of 2015. 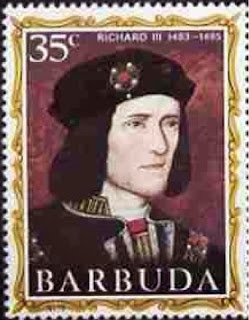 Royal Mail has depicted the bloody-handed king previously as part of its "Houses of Lancaster and York" set of 6 stamps which was issued on 28 February 2008 and was not put off from depicting him on a British stamp, side-by-side with The Queen's silhouette, by the fact that he had murdered his two nephews, one of whom, King Edward V, was also featured in the same set - adolescent murder victim and his killer displayed side-by-side on the stamp album page!
In modern times, the medieval monster has had many apologists determined to paint him as a heroic and guiltless king of England but always unconvincingly. There can be no doubt that the appearance of such a creature on a British stamp was appalling and such an error should not be repeated (likewise other royal monsters, such as Henry VIII should be banished from philatelic commemoration).
William Shakespeare, the great English playwright who was born only 80 years after the overthrow of Richard III, of course wrote a play about the monster in which he attributed a number of vicious crimes and murders to the last Yorkist king all of which the apologists have attempted to pass off as anti-Richard Tudor propaganda. Included in the dreadful crimes depicted by Shakespeare is the kidnap and above mentioned murder of his nephews, the murder of poor, mad King Henry VI, the murder of his own wife, Anne Neville, and the murder of George, Duke Of Clarence, his own brother. Quite a catalogue compiled by a writer who was alive when the children of people who lived through Richard's mercifully brief reign would still have been alive to tell him about their memories of that time.
The apologists, for a long time, put it about that it was also Tudor propaganda which Shakespeare repeats in his play that says that Richard was physically deformed with a spinal curvature and they insisted that a painting of him had been doctored to add a hump to his back to fit in with the Tudor myth. What a shock for them when the body in the car park was fully revealed to have a severe spinal curvature which would indeed have given the appearance of having the sort of physical disability which Shakespeare described. How much else of his "Tudor propaganda" is actual fact? - enough, one suspects, to feel it wholly inappropriate for this vicious king to be commemorated in any way on any more British stamps.
Richard III has certainly had more than his fair share of philatelic depiction already. As founder of the College of Arms on 2 March 1484 his own coat of arms was depicted on 1 stamp from a set of 4 which commemorated the quincentenary of the College and which was issued on 17 January 1984:- 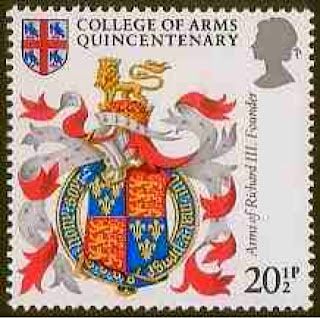 He was depicted on a stamp from Barbuda which was issued on 2 November 1970 (see above). The design used the same portrait as that used on the 2008 British stamp.
Likewise, a stamp from Grenada, issued on 27 January 1984, used the same portrait in its depiction of Richard III but this item is interesting in that the stamp is se-tenant with one which depicts a portrait of King Henry VII who defeated Richard at the Battle of Bosworth Field in 1485 where the Yorkist was killed which led to his burial in Leicester where his skeleton was to be found over 500 years later:- 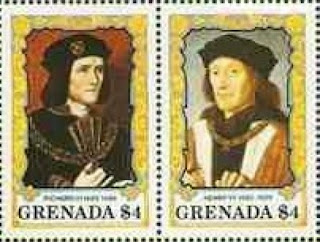 In a stamp issued by St. Vincent on 7 February 1977,  Richard III is pictured between both the boy he murdered to take the throne for himself, Edward V, and the man who put an end to his tyranny, Henry VII. Sadly, the artwork is very poor but it is still an intriguing modern stamp:- 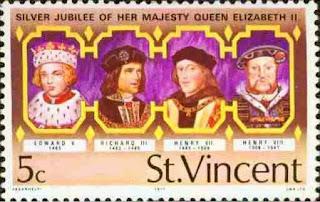 Sierra Leone issued a set of stamps on 13 May 1989 to commemorate the 425th anniversary of Shakespeare's birth (see Blog 326) and one of them shows the scene in Shakespeare's play where Richard III awakes from a sleep full of nightmares prior to the Battle of Bosworth - the nightmares which are haunted by the ghosts of his victims:- 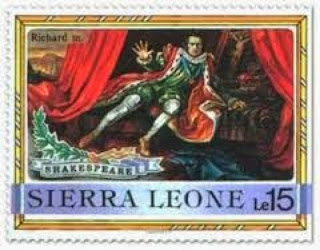 And four of his victims have indeed been featured on Commonwealth stamps in the past. The unfortunate royal nephew,  Edward, was also included in the 2008 British "Houses Of Lancaster and York" set as well as finding his way on to one of the Barbuda Kings of England stamps from 1970:- 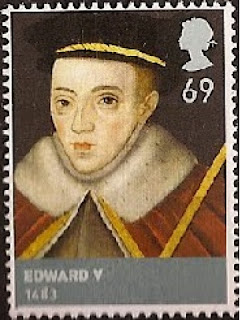 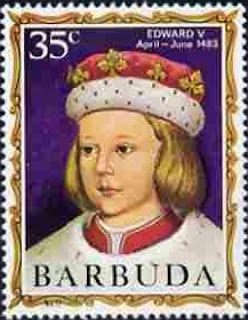 The Barbuda issue in particular makes Edward look like a poor innocent child, which I suppose he was, and the pathos is increased by a stamp from Jersey which was issued on 13 August 1979 which depicts two frightened boys, Edward and his younger brother, Richard, doomed prisoners in the Tower of London awaiting their dreadful fate. The depicted painting is by Sir John Millais and commemorated the 150th anniversary of his birth as well as International year Of The Child which, given the boys' fate was not perhaps best commemorated by that particular painting. You have only to look at this remarkable painting to realise how inappropriate it is to commemorate their uncle philatelically. 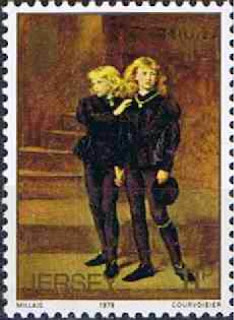 Equally poignant, is the painting of feeble-minded Henry VI, deposed by Richard's brother, Edward IV, who was also murdered in The Tower of London at the hands of Richard III, if Shakespeare is to be believed. This, again, is one of the stamps from the British 2008 set:- 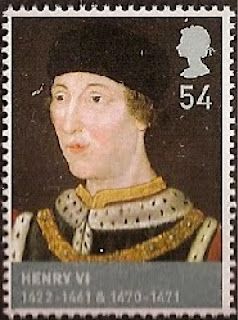 Yet one more of Richard III's victims has been shown on a Commonwealth stamp - his unfortunate wife, Anne Neville, whom he was reputed to have killed so that he could marry his niece, Elizabeth of York, sister to the dead boys, to strengthen his position on his usurped throne. Anne and her coat of arms appear on two of a set of 3 stamps which were issued on 1 July 1982 by Grenadines Of St. Vincent to commemorate the 21st Birthday of the late Diana, Princess Of Wales. The issue was part of a mini-omnibus which depicted previous Princesses Of Wales and Anne qualified for inclusion in the set because, prior to marrying Richard III she had been the wife of Edward, Prince Of Wales, the son of Henry VI, who was killed by the Yorkists after the Battle Of Tewksbury. Shakespeare of course casts Richard in the role of Prince Edward's killer:- 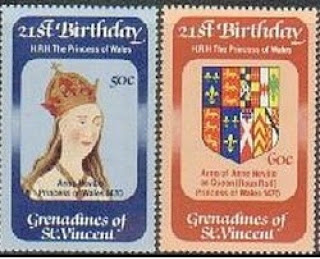 So we must see over the coming months just what subjects Royal Mail is planning to feature on its stamps next year. But could the organisation really defend issuing a set of stamps to commemorate the monster's funeral? If they think that there's money to be made out of it I suspect they will find it very easy to defend such an issue!
Meanwhile I'm off to see the latest production of Shakespeare's Richard III in London which is reported to be very bloody with the audience sitting in the front two rows being sprayed with fake blood. Fortunately I have a seat booked in the third row!
Post scriptum: Britain will hold a state funeral for Richard III in March 2015 at Leicester Cathedral after his body will have laid in state for 3 days. Can Royal Mail resist cashing in on this event with an issue of special stamps?

Post post scriptum: the re-burial was held on 26 March 2015 in Leicester Cathedral in the presence of Richard Duke of Gloucester and the Countess of Wessex as well as the Archbishop of Canterbury. A specially written poem was read by the actor Dominic Cumberbatch, said to be an extremely distant relative of Richard III, but who, more interestingly, will play Richard III in the "Hollow Crown" series of historical plays by William Shakespeare which is currently being produced by the BBC.
No stamps were issued by Royal Mail to commemorate the event - an impressive display of self-restraint from Royal Mail for once! Richard III's new grave in Leicester Cathedral is depicted at the head of this blog.