Having felt it necessary to inject an air of mystery into the forthcoming Commonwealth Games stamps, Royal Mail has finally released the design of the stamps just 16 days before they will be issued on 17 July 2014. The designs are vaguely interesting although almost monochromatic and at least collectors are not burdened with an additional miniature sheet although there is the almost inevitable accompanying retail booklet of 2 x 1st class self-adhesive stamps with 4 x 1st definitive stamps. Because the set includes a £2.15 value the whole set actually costs an eye-watering £7.02 with the price of the booklet being £3.72p so collectors will have to pay £10.74 for the basic mint stamps and booklet. I suppose that Royal Mail will point to the inclusion of a 2nd Class domestic rate stamp in the set as evidence that they are "listening to" the concerns of their customers about the cost of new issues.
The stamps were designed by Howard Brown and lithographed by International Security Printers.
P.S. Due to objections raised by a notable British dealer in British stamps to the depiction of these stamps, the illustrations have been removed from this Blog (see Comments below). Illustrations of the stamps can be found on the Royal Mail Philatelic Bureau website where details of the issue are given along with illustrations of lots of other collectables which the Bureau has for sale such as a cuddly toy Games mascot (cost £12.99) and a Commonwealth Games tea towel (cost £9.99p) which philatelists will undoubtedly wish to add to their collections. The dealer has revealed that a major press launch will be made on the day of issue of the stamps.
Malta Post issued an attractive set of 3 stamps on 27 June 2014 on the subject of Maltese flora. The stamps were designed by MaltaPost p.l.c. and lithographed by Printex:- 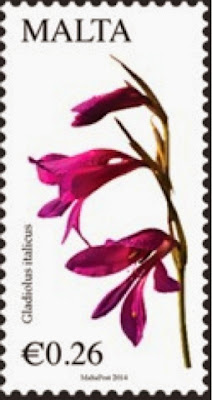 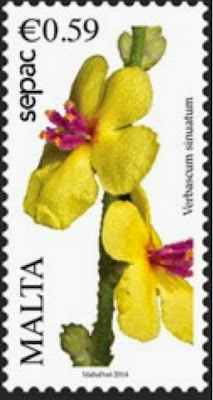 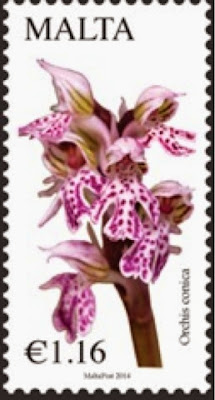 Australia Post continues its programme of weekly stamp issues with the release of 2 stamps and 1 miniature sheet to commemorate the centenary of the first Australian airmail which was carried by the French aviator, Maurice Guillaux, on a 2 day flight (with stops) starting at Melbourne Agricultural Grounds on 16 July 2014 and finishing in Sydney. His total time in the air on this historic flight was nine and one quarter hours. The stamps were designed by Jo Mure and lithographed by McKellar Renown:- 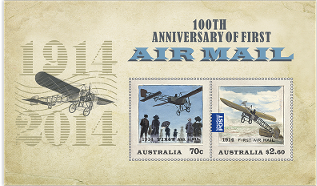 In Blog 388 I mentioned the 2014 Lunar New Year issue from Bhutan Post which commemorated the Year Of The Horse. In addition to the previously mentioned sheetlet of 12 x 20 Nu stamps and accompanying miniature sheet (50 Nu value), a single 10 Nu stamp was also issued in ordinary sheets:- 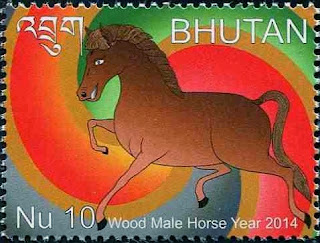