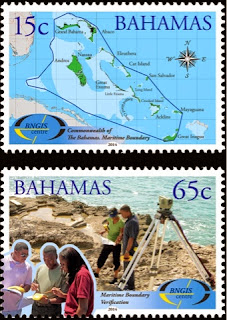 Bahamas will issue 4 stamps on 21 July 2014 to commemorate the 10th anniversary of Bahamas National Geographic Information Systems Centre. The stamps were designed by Bee Design and printed in lithography by Lowe Martin:- 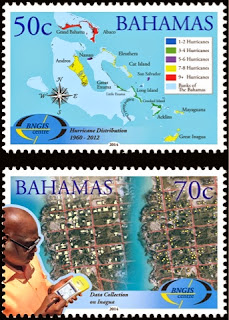 Gibraltar will issue a set of 7 stamps on 15 July 2014 on the subject of Endemic flowers of Gibraltar. The stamps were designed by Stephen Perera from photographs by Leslie Linares and printed in lithography by Cartor:- 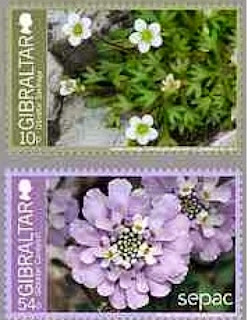 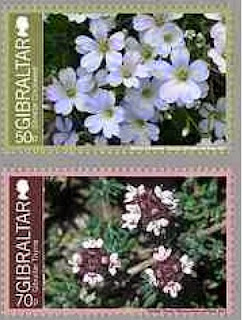 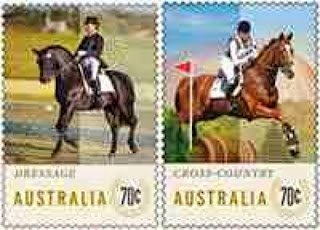 This week's issue from Australia Post will be on the subject of "Equestrian Events" and will consist of a set of 5 gummed stamps, 5 self-adhesive stamps from a coil and 5 self-adhesive stamps from booklets (each individual design taken from a different booklet of 10 x70c stamps totalling $35 worth of booklets). The stamps were designed by Phil Ellet of Creative Ethos and lithographed by EGO Pemara:- 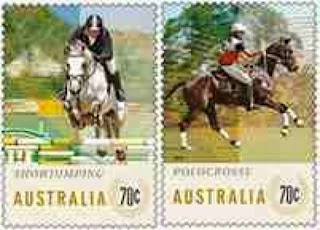 Stamperija's latest philatelic outpouring involves 3 Commonwealth countries - Uganda, Maldives and Mozambique. Although Stamperija is marketing the latest products with Uganda's name printed on them, the designs and printing look more as though they come from the IGPC agency rather than that located in Lithuania. With a date of issue given as 26 February 2014, the unifying theme of the 10 sheetlets (each of 4 different "stamps") and 10 accompanying miniature sheets is "Domestic Animals". The subjects of the individual subsets are:- Dogs (2 sheetlets each of 4 different stamps and 2 miniature sheets):- 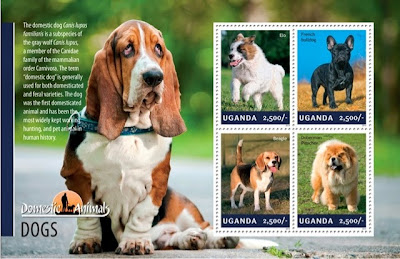 This item includes a real howler - an obvious picture of a chow chow on one of the stamps is labeled as  a "Doberman Pinscher" - is the designer not capable of doing the most basic research to ensure the correct breed has been identified? There really is no way that it is possible to confuse the 2 breeds. 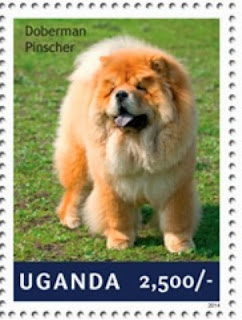 And how can it be appropriate for Uganda to feature huskies pulling a sled though the snow?:- 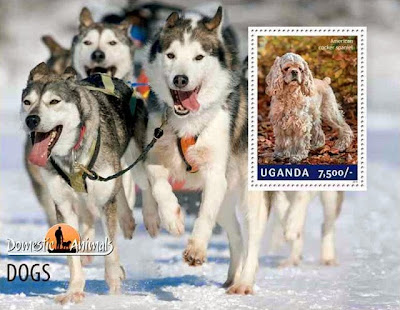 The other sub-themes are:- Horses:- 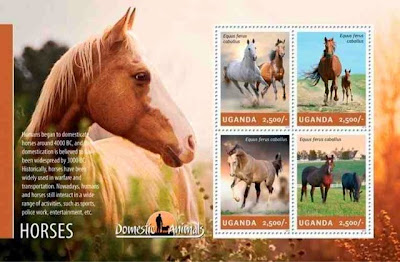 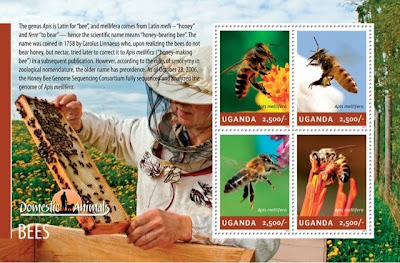 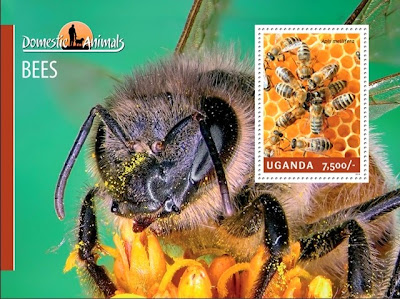 Canaries, Siamese Fighting Fish, Goldfish, Cats, Goats and Farm Yard animals (though the scenes featured on the stamps do not look at all as though they feature farm animals as you would find them in Uganda):- 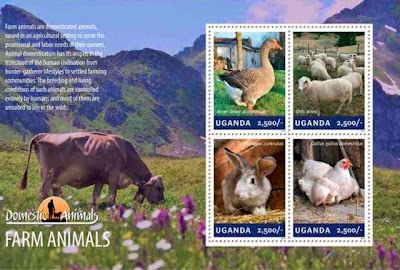 Maldives - Stamperija gives a date of issue of 7 May 2014 (or 5 July) for 9 sheetlets of 4 different "stamps" plus 9 accompanying miniature sheets with 2 additional sheetlets said to be issued on the same date. The first of these additional sheetlets is bizarre in its subject matter - 5 "stamps" which commemorate the centenary of E. Marinella, an upmarket neck tie manufacturer which has branches in Azerbaijan, Belgium, France, Italy, Japan, Britain, Switzerland, Spain, Monaco and The United States but not, as far as I know, in Maldives:-

The second additional sheetlet consists of 4 identical stamps which depict an item of Chinese art. The topics of the 9 formulaic sub-issues are the 50th anniversary of The Red List (the art is very sub-standard and the featured species mostly seem to have no connection with Maldives):- 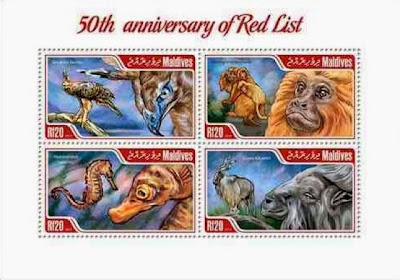 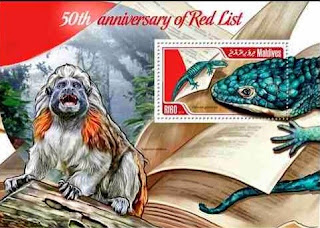 70th anniversary of The Battle Of The Bulge:- 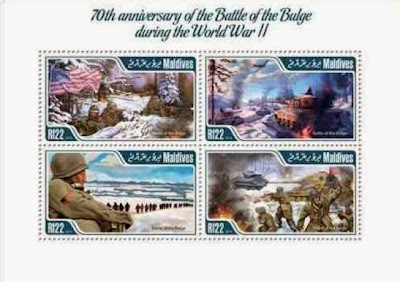 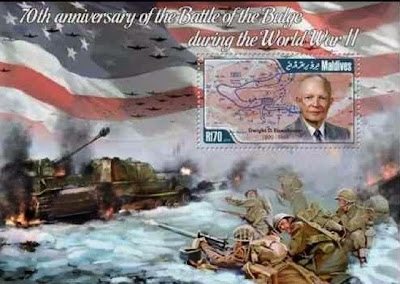 and Wassily Kandinsky, The English Channel Tunnel, Elvis Presley, Henri Matisse, Marilyn Monroe and Joe DiMaggio, Louis Renault and the Centenary of the beginning of the First World War. Personally, I shall not be rushing out to buy any of these products which, I'm sorry to say, is also the case with the latest items with the name of Mozambique printed on them and said to have been issued on 30 April 2014. There are 15 each of the usual 4 value sheetlets and accompanying miniature sheets, this time on the subjects of:- Dinosaurs, Hares, Tigers, Lynxes, Bees, Owls, Snakes, Alligators, Jaguars, Monkeys, Eagles, Horses, Bears and most inappropriately of all, polar bears (!) and wolves:- 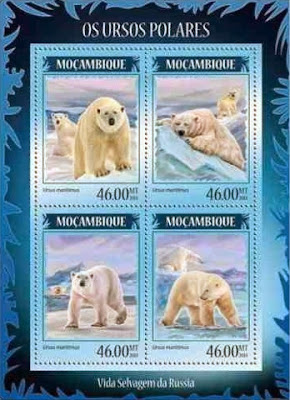 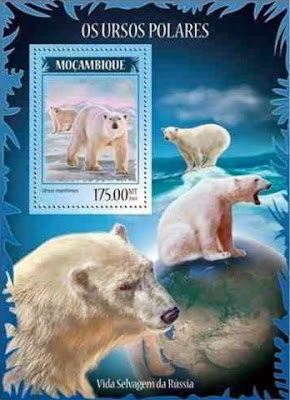 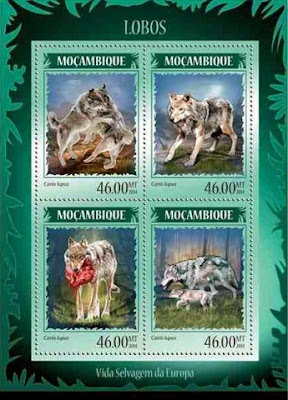 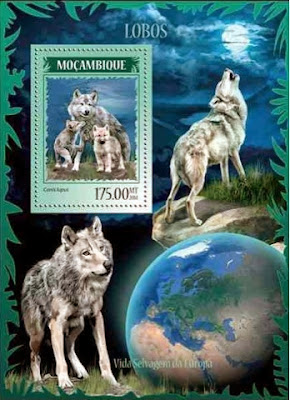 Surely even the most enthusiastic "polar bear" thematic collector will question whether they wish to add these items to their collections when they consider what on earth a hot south-east African country like Mozambique is doing allowing stamps to be produced on its behalf which are on the subject of this arctic-inhabiting creature.