Although the small Gulf state of Qatar is not a member of The Commonwealth its history from the early 19th to late 20th centuries and its early philatelic history are closely tied up with Great Britain. The story of the first 13 years of its postal service up to 1963 is covered by the Stanley Gibbons Commonwealth Stamp Catalogue and even after the end of the listing in the Commonwealth Catalogue Qatar remained a Protectorate of Great Britain until 1971 when Independence was granted to it. Commonwealth collectors should probably include the stamps of Qatar in their collection which were issued up to the date of full political independence to be fully logical about it.
Gibbons notes that there was no postal service from Qatar until 1950 when the British Political Officer there organised a postal service from Doha - from 18 May 1950, British residents in the state were able to send mail via his office. The first Doha postmark was introduced in July 1950 and the Post Office became a separate entity in August 1950 when its services became available for the general public to use. The British stamps with Bahrain and later Eastern Arabia surcharges were first used there and on 1 April 1957, contemporary British definitives overprinted "QATAR" and surcharged in the local currency were introduced. The World Scout Jubilee Jamboree set of three stamps with appropriate overprint and surcharge was issued in Qatar on 1 August 1957 as was another set of Wilding portrait defintives with altered watermark on 26 April 1960. A set of 11 stamps was issued on 2 September 1961 which depicted Shaikh Ahmed bin Ali Al Thani in the denominations of 5np, 15np, 20np, 30np (portrait of Shaikh Ahmed),  40np and 50np (a peregrine falcon), 75np (a dhow), 1r and 2r (an oil derrick) and 5r and 10r (a mosque). Some of the values are depicted below:- 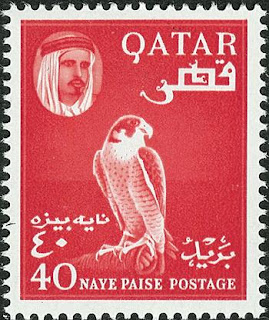 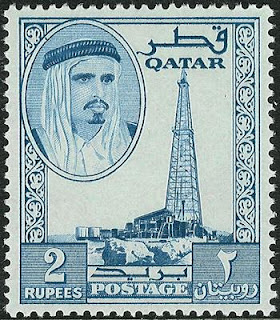 The Qatar Post department took over the running of postal services from the British authorities on 23 May 1963 and it is at this point that Stanley Gibbons Catalogue rather arbitrarily ceases to list Qatar stamps in its Commonwealth section.
Sheikh Ahmad became the ruler of Qatar on 24 October 1960; his family, the Al Thani, having been leaders in Qatar since 1825. Prior to that the area had been ruled by the Al Khalifa family of Bahrain but after the British had bombarded and destroyed Doha in 1821 (see Blog no. 241) in response to alleged piracy by the Gulf rulers, the Qataris had begun a resistance to Bahraini rule. The maritime war fought between the Bahrainis and the Qataris from 1867 to 1868 ended in a British intervention which gave tacit recognition to Qatar as a separate territory and the founding of the State of Qatar is usually dated from 18 December 1878, now observed as National Day. The territory was under Ottoman suzerainty from 1871 to 1916 when it became a British Protectorate during the First World War.
The first 2 commemorative sets issued by the Qatar Post Department both comprised 5 stamps and were overprints on stamps of the contemporary definitive series. The first issue commemorated the Olympic Games in Tokyo and was issued on 25 October 1964 and the second commemorated the late President Kennedy of The United States and was released on 22 November 1964.

Subsequently, between the beginning of 1965 and the date of the granting of Independence on 3 September 1971, the Qatar Post Office issued a rather large total of 667 stamps and miniature sheets which meant that Gibbons' arbitrary cutting out of Qatar from the Commonwealth Catalogue from 1963 onwards ensured that collectors of Commonwealth stamps did not have to buy such a large number of items. However it is fair to say that the number of Qatari stamps issued was relatively modest compared with many of the other Gulf states and the designs and printing of Qatar's stamps were usually of high quality. A set of 4 stamps and a miniature sheet were issued on 17 January 1972 to commemorate the achievement of Independence:- 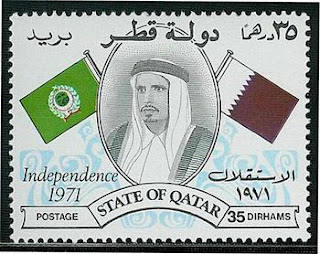 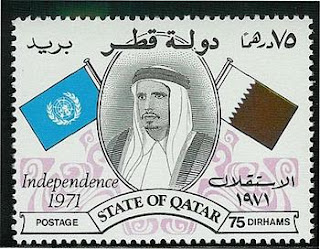 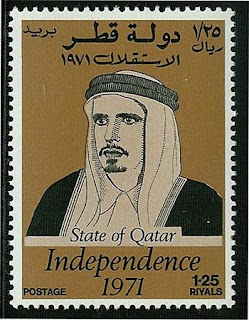 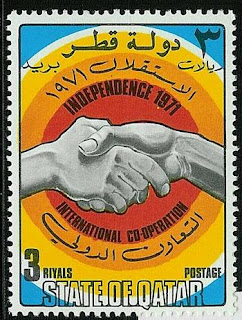 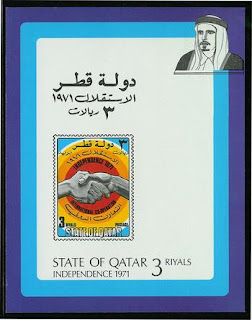 Just 5 days after that stamp issue, Shaikh Ahmed was deposed by his cousin, Shiekh Khalifa bin Hamad Al Thani, and he ruled Qatar until 27 June 1995 when he was deposed by his son, Sheikh Hamad bin Khalifa Al Thani, while out of the country on a visit to Switzerland. Sheikh Hamad took action to introduce many reforms in Qatar as well as significantly raising the small country's international profile and his final surprising action was to abdicate on 25 June 2013 in favour of his second son, Sheikh Tamim bin Hamad Al Thani, who becomes the youngest ruler in the Gulf states.   Shaikh Tamim is depicted at the head of this blog and below is a stamp from 1994 which commemorates the 23rd anniversary of Independence, the design of which includes a portrait of Shakh Khalifa:-

Until the last few days I have been entirely unaware of a set of 4 surcharged stamps which was actually issued by The Gambia 30 years ago. I saw them for sale on an internet auction site and scurried to my copy of Gibbons' West Africa Catalogue to see what it had to say about this issue to which it has not allocated any catalogue numbers.There is a note after the entry for the bicentenary of manned flight issue which was released on 12 December 1983 (SG nos 522 - 526) which states that "On 14 December 1983 four provisional surcharges, 1d50 on1d25 (No. 439), 1d50 in 1d25 (No.473), 2d on 1d25 (No. 456) and 2d on 1d25 (No. 478), were issued in very limited quantities; there being, it is believed, no more than 600 complete sets". Presumably Gibbons does not include this set in its numbered list because of the small number of sets produced although there are examples of many other stamps which were produced in even smaller numbers which have found their way into the main catalogue listing. I guess that this is just another example of the multiple inconsistencies of the catalogue and why collectors should not allow themselves to be ruled by what the catalogue says is in and what it says is out. Nevertheless, they seem quite interesting to me and I depict them below:- 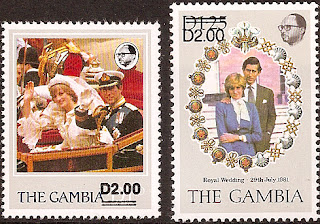 Offered on Steven Zirinsky's internet shop website are more of the current Guyana provisional surcharges, again all 20c values hand-stamped in blue or black on various stamps. I wonder what the status of these items will be given that they are surcharged by hand rather than the new value being applied by a machine. They remind me of the first items produced in Bangladesh when a huge array of Pakistani stamps were overprinted in various towns and cities by handstamps but so numerous that they never received formal catalogue listing. It will be interesting to see what develops:- 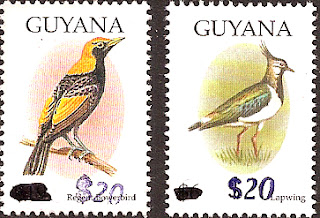 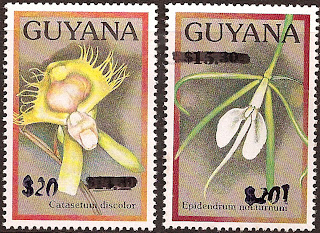 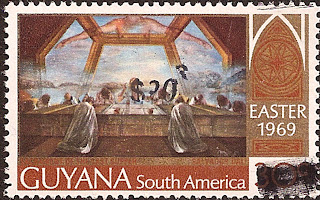 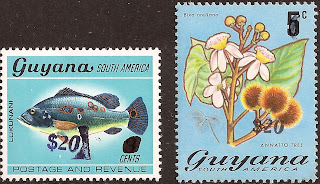 The $100 value of the set of 3 stamps which commemorated the visit of US President Clinton to Guyana and which was originally issued on 10 November 1997 has also been surcharged as shown below:- 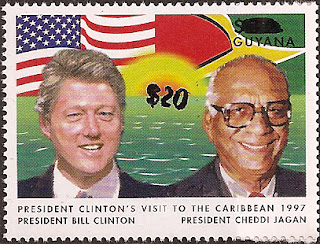 Finally, I do not recognise the stamp below which appears to be valued 30c and to have the features of a stamp which would have had local usage in recent years. The design appears to show a local car ferry as well as the national flag of Guyana and I wonder if it is a previously unissued stamp:- 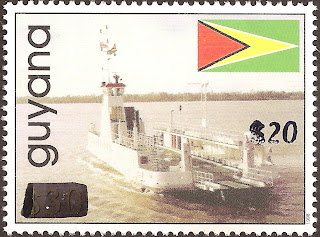 I have also just obtained from Steven Zirinsky a cover from St. Kitts which was one of several he had on his website in which revenue stamps had been used for postage. This cover was cancelled at Basseterre and is dated 20 March 2005 and 3 x 10c revenue stamps were used to pay the local rate:- 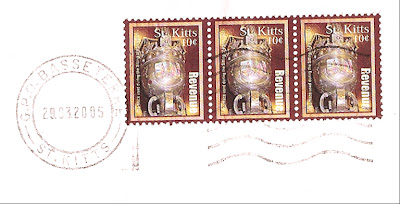 Finally, I have just obtained another set of stamps for which I have been searching for a long time and which is rarely offered for sale on the internet and which I have not yet seen being sold by any of the large new issue dealers - this is the set of animals from Tanzania which consists of 4 stamps and 2 miniature sheets which was issued on 30 January 2008. I eventually managed to obtain the set from a dealer in China who was selling it on an internet auction site. So many new issues are difficult to find in these modern times - one just has to keep looking everywhere to track some of them down and patience is eventually usually rewarded. 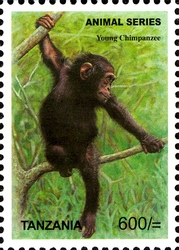 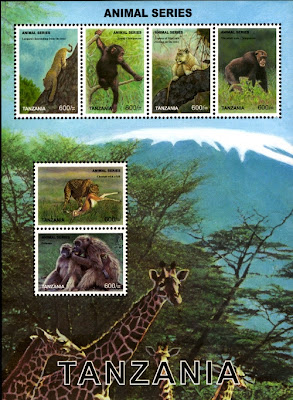