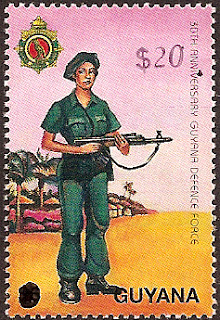 Yet another Commonwealth country has been forced to issue overprinted and surcharged stamps to provide stamps for use on ordinary mail even though it is the client of a large international philatelic agent which produces scores of philatelic items with the country's name printed on them every year. This time the country in question is Guyana which is the client state of a large New York-based philatelic agency. Collectors of Commonwealth stamps will know that this is not the first time that the Guyana Post Office has been reduced to overprinting and surcharging stamps - in the 1980's through to the beginning of the 90's hundreds of stamps were produced by doing so as "austerity" measures. Clearly the philatelic agency it uses may produce hundreds of stamps in its name - including the notorious "King Edward XIII" stamps which appeared last year - but those particular items do not appear to address the mail service's postal needs.
I have recently obtained from Steven Zirinsky's Internet shop, 6 different old Guyana stamps all surcharged $20 in different formats as depicted at the head of this blog and also below. The stamp pictured above is one of the 2 values ($6) which comprised a set to commemorate the 30th anniversary of the Guyana Defence Force and which was originally issued on 1 December 1995. Immediately below is the $6 value depicting a lapwing which was part of a 12 value definitive set which featured birds and was originally issued on 8 May 1995. Beside it is what I think must be SG no. 944 which was issued on 17 May 1982, an "Essequibo Is Ours" overprint with 40c surcharge on 2c value. 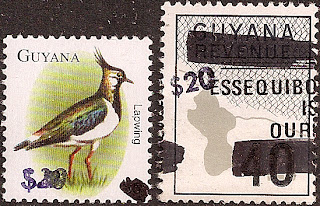 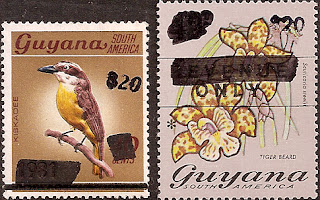 The final stamp depicted below with the a new $20 surcharge applied is SG923 which was originally issued on 27 April 1982 as an overprint of "1982" on the 40c value of 4 value set which commemorated the 1400th anniversary of the Koran which itself had first been released on 9 October 1968:- 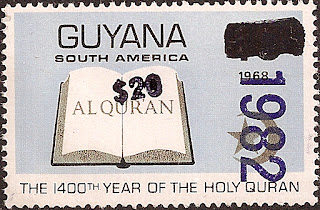 It is interesting that all the stamps which have been surcharged in this currant wave of production of 20c stamps have an original face value of 40c/$40. Presumably that value is not required for use in Guyana and so is being used up to deal with a shortage of 20c stamps. Interesting too to think what a huge number of very old postage and fiscal stamps the Guyana Post Office must have in stock. Of course, one of the most memorable surcharges on an old stamp occurred in Guyana in 1983 when a $4.80c British Guiana  fiscal stamp from the Victorian period was reissued on 17 March 1983 with an overprint applied to commemorate the 25th anniversary of the International Maritime Organisation (SG no. 1071).
I have previously mentioned a recent set from Fiji which was on the subject of the Fiji Paralympic team. Now that I have received a set myself I can depict the designs below:- 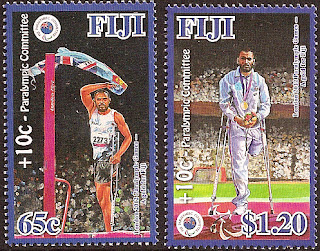 The set consists of 4 stamps each of which has a 10c surcharge which represents a contribution to the funding of the Fiji Paralympic Team and actually commemorates Iliese Delana who competed in the 2012 London Paralympic Games where he won Fiji's first ever Paralympics gold medal in the men's High Jump F42 class. All 4 values, as can be seen, depict the athlete but none of them name him just as Jamaica's recent Olympic winners set failed to identify the athletes who were depicted on their stamps. Doubtless all are known locally in the respective countries for which they won their medals but it is a shame that the designers of the respective sets did not think about collectors abroad who may wonder who is being shown in the stamp designs.

It is strange how elusive some new stamps may be. On 15 March 1994, Uganda issued 6 stamps and 1 miniature sheet to commemorate World Meteorological Day. At the time I could not find any dealer who was selling these items and it was only several years afterwards that I was able to obtain a set of the stamps but not the miniature sheet. There has been a blank space in my Uganda collection waiting for that miniature sheet for almost 20 years. But no longer! I have finally added the item to my collection after an internet purchase for a very modest price. This was the first time that I had ever seen the miniature sheet being offered for sale by anyone. Quite why this item has proved to be so elusive for such a long time, I have no idea. Perhaps it is just very rare for some reason. An example of it at least is at long last sitting comfortably on one of my Uganda album pages:- 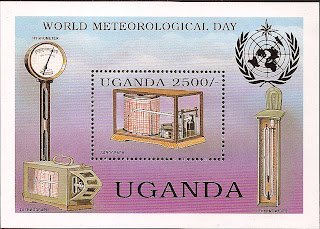 Finally, the Lithuanian philatelic agency, Stamperija, has announced its latest productions for the Solomon Islands Post Office. The agency says that it issued a series of philatelic items on 3 May 2013 under the title "Various Stamps" and this issue consisted of 2 sheetlets each containing 9 different philatelic items all of which commemorated the Royal Visit of The Duke and Duchess Of Cambridge to the islands in 2012 as part of the celebrations of the Diamond Jubilee of Queen Elizabeth II, and there were also sheetlets of 4 philatelic items and accompanying miniature sheets each comprising sub-issues on the the subject of the Lunar New Year, Pacific region frogs, Nelson Mandela and African minerals (!), "Australia 2013" Philatelic Exhibition - Australian wildlife, English castles and Golf Players of the Pacific islands. This issue comprises therefore 42 "stamps" and 6 miniature sheets which means that, at the beginning of May, 186 stamps and 43 miniature sheets (total 209 items) have been produced in the name of the Solomon Islands Post Office so far in 2013.
I am waiting to see how these philatelic items get used in The Solomon Islands themselves. One excellent source of information is Steven Zirinsky's shop website as he features many examples of modern postal history which he has for sale. Although he has a number of covers from Solomon Islands on sale which bear postmarks from early 2012, I do not think that I have seen any covers there yet which are dated after 5 June 2012 which is when Stamperija say that they released their first stamps for Solomon Islands. It will be interesting to see when and if true commercial covers with Stamperija products appear on the market.  It will also be interesting to see which sub-sets are used on real mail - certainly the Royal Visit issue mentioned above does look as though it could be used practically on mail and as it has a strictly local theme may well be intended for use on real mail. Has anyone been to Solomon Islands recently and bought any of these stamps across the post office counter?