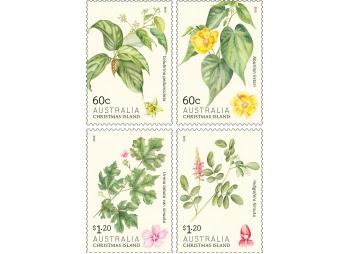 Australia's latest issues comprise 2 sets; the first, pictured above and on the subject of Christmas Island flowering shrubs, is inscribed Australia Christmas Island and consists of 4 gummed stamps from sheets as well as the two 60c designs in self-adhesive format sold in booklets of 10 (5 of each design). The date of issue was the 18 June 2013 and the artwork was by Dierdre Bean with stamp design by Simone Sakinofsky. A second issue from Australia Post is inscribed Australia Cocos (Keeling) Islands and was released on 4 June 2013 to commemorate the 50th anniversary of the first Cocos (Keeling) Islands stamps. The set comprised 5 values which were also combined in a large miniature sheet, shown below, and was designed by John White and lithograph printed by RA Printing. The lower half of the miniature sheet also depicted stamps of the original issue:- 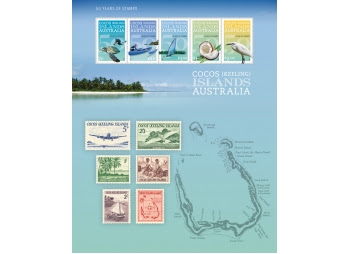 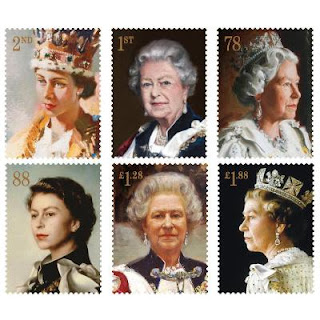 Recent issues from Great Britain's Royal Mail comprise the 6 stamps depicted above which commemorate the 60th anniversary of the Coronation of Queen Elizabeth II. Each stamp shows a different portrait of the Queen and the set was issued on 30 May 2013, being designed by Atelier Works and printed in photogravure by Walsall Security Printers. Just over 2 weeks later Royal Mail churned out another issue on 18 June 2013 which comprised 4 stamps contained in a miniature sheet which depicted Northern Ireland locomotives and the issue was accompanied by a £3.60 retail booklet which comprised of 4 x 1st (60p) definitive stamps and 2 x 1st stamps from the Northern Ireland's trains set. The issue was designed by Delaney Design and printed in lithography by Cartor. 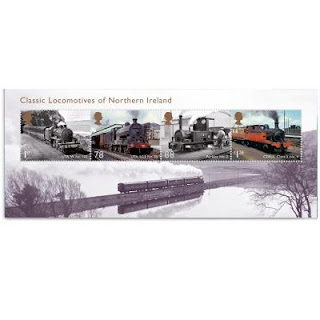 Royal Mail will issue 6 Post And Go stamps on 25 June 2013 which will necessitate collectors to actually buy 12 stamps since they are produced in 2 forms - digitally by Wincor-Nixdorf machines situated in various post offices and in lithography by Walsall Security Printers, the latter being sold in special collectors' packs as has previously happened. This will be the second of the sets designed by Kate Stephens which features freshwater creatures. Just 15 days after the Post and Go sets, on 10 July 2013, Royal Mail's next set will appear - 10 stamps which feature British butterflies. That set is designed by MARC AND ANNA (sic) and is lithographed by Cartor.
I have just received my latest copy of Canada Post's magazine, "Details/En Detail", an excellent (and free) quarterly publication which carries features on the latest stamp issues from Canada as well as publicising the various items which Canada Post has for sale. Pleasingly, the number of new issues to be released during the summer of 2013 is very modest (Australia Post and Royal Mail could take lessons in self-control as regards the release of reasonable numbers of new stamps from the excellent Canada Post).

The new issues are:-
5 July 2013 - Children's literature, "Stella" - 2 self-adhesive stamps from a booklet of 10 domestic rate stamps and 1 gummed miniature sheet. Designed by Q30 design Inc. and lithographed by Lowe-Martin. 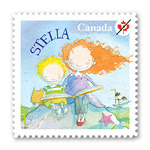 19 July 2013 - Canadian recording artists - 4 self-adhesive stamps from booklets (there are 4 different booklets, each one dedicated to a different musical group) and 1 gummed miniature sheet which contains 1 value of each stamp. The groups which are depicted on the stamps are Rush, The Tragically Hip, The Guess Who and Beau Dommage. The stamps were designed by Paprika and lithographed by Lowe Martin. 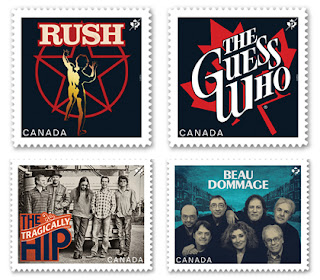 28 August 2013 - Centenary of the birth of Robertson Davies - 1 self-adhesive stamp from a booklet of 10 domestic rate stamps. Davies was the author of novels which include Fifth Business (1970), Manticore (1972) and World Of Wonders (1975) which together constituted The Deptford Trilogy. He was born in Thamesville, Ontario and was the founding master of Massey College which opened in 1963. The stamp is designed by Steven Slipp and lithographed by Lowe Martin. 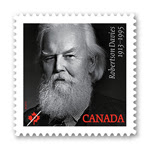