257. Australia Goes A Whole Month Without A Stamp Issue. 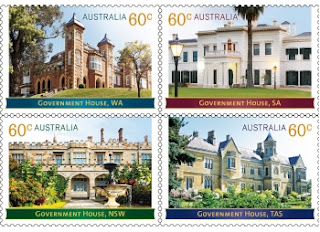 Australia Post's latest issue was released on 11 June 2013 and was on the subject of State Government Houses. The 4 stamps were issued in gummed form as well as self-adhesive from both coils and booklets, so, as usual, 4 designs made 12 different stamps for the collector to buy. The designs by Sonia Young feature the Government Houses in Western Australia, South Australia, New South Wales and Tasmania. The designs are well executed and quite attractive but are generally unremarkable. What is remarkable is that this is the first Australia Post issue since 11 May 2013 - the organisation has actually allowed a whole month to elapse between 2 consecutive stamp issues. Australian collectors must have been developing withdrawal symptoms but presumably Australia Post's profits made from sales at the Australia 2013 exhibition were great enough to allow the philatelic programme planners to feel relaxed about not issuing any new stamps for a whole 4 week period.
From Gibraltar a surprisingly understated and cheap  issue (face value 52p) to commemorate the 300th anniversary of the Treaty Of Utrecht - just 2 stamps to commemorate possibly the most significant event in the history of the territory since it was by that treaty that Great Britain gained control of the Rock from Spain. The 42p value has a quotation from the treaty, "for ever, without any exception or impediment whatever", thus illustrating the political point that Spain having ceded the territory to the British crown has no claim to Gibraltar now, which may be fair enough but the Treaty also has another few lines in it which say, quite remarkably and quite unacceptably, in this modern age, "And Her Britannic Majesty, at the request of the Catholic King, does consent and agree, that no leave shall be given under any pretence whatsoever, either to Jews or Moors, to reside or have their dwellings in the said town of Gibraltar...". Clearly if the Gibraltar government followed that provision in the treaty then it would be behaving in a flagrantly racist manner and find itself in trouble with the European Court of Human Rights. So, one presumes, Gibraltar is likely to be in breach of the Treaty Of Utrecht if it allows Jewish or African people to live in the town so if Gibraltar breaks the terms of the treaty, no matter how reasonable the reason, then Spain may too. How very complicated it is to adhere to a 300 year old treaty - perhaps that is why the commemorative issue is so minimalist but it does not seem like a good idea to me to have placed a quote from the treaty on the stamp. The stamps were designed by Stephen Perera and lithographed by Cartor and will be issued on 20 June 2013:- 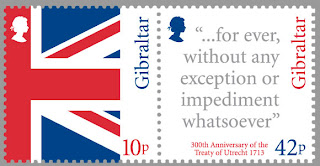 Also to be issued on the same date, are 4 stamps which are Gibraltar's contribution to the 2013 Europa theme - postal vehicles. These are excellent designs by the artist John Batchelor whose work has been arranged to the stamp format by Stephen Perera and again lithographed by Cartor. The postal vehicles featured are historical and very interesting. I like these stamps most of all the Commonwealth country Europa designs for 2013.