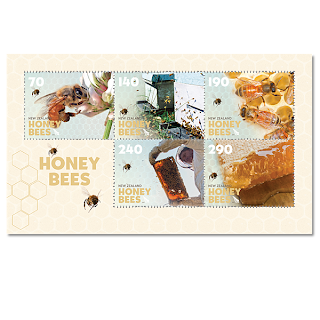 New Zealand Post's next stamp issued will be released on 3 July 2013 and will consist of 5 stamps and 1 miniature sheet which depict honey bees. The stamps were designed by Strategy And Design, Wellington and printed in lithography by Southern Colour Print:- 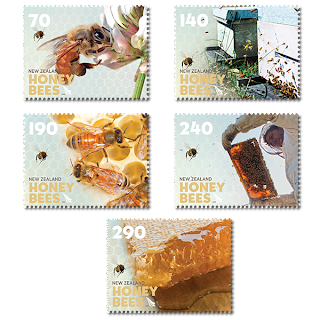 The next issue from Singapore will be released on 17 June 2013 and consists of 5 greetings stamps which depict sign language. There is also an accompanying $2.55 booklet which contains 10 1st Local stamps (2 of each design).  The stamps were designed by Tiang Wen Cheng and printed in lithography by Secura, Singapore:- 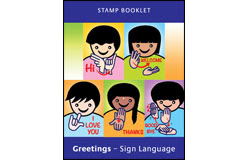 Other recent new issues from Singapore are:-
20 March 2013 - 2 new definitive stamps (1st and 2nd Local) in gummed form from ordinary sheets with the 1st local also sold in booklets in self-adhesive form. Designed by Eric Kang and printed in rotogravure by Enschede: 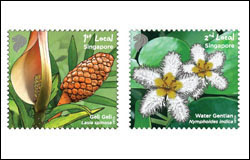 10 May 2013 - "Australia 2013" International Philatelic Exhibition (1 miniature sheet). This is a very clever item because it includes the Year Of The Snake stamps with 2 boomarangs in the background, their shape and colour closely resembling the snakes featured on the stamps - an excellent design:

28 May 2013 - The Marine Bay Skyline (4 stamps and 1 "Collector's Sheet"). Designed by Brainwave Design and lithographed by Southern Colour Print: 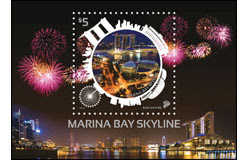 Cyprus issued a set of three stamps on 5 June 2013 on the subject of "Organisms of The Mediterranean Marine Environment Cyprus"which is quite a long-winded title for 3 modest little stamps which nevertheless are interesting and attractive as is usually the case of the issues of The Republic Of Cyprus:-

I illustrate below some of the latest items produced by Stamperija, a Lithuania-based philatelic agency, on behalf of the Solomon Islands Post Office as I detailed on Blog 255. The first 2 items are the sheetlets which commemorate the Royal Visit by The Duke and Duchess Of Cambridge which took place in 2012. The stamps, as I have previously written, look as though they could quite easily be used on real mail and it will be interesting to see if genuine commercial mail turns up with them applied to the envelopes:- 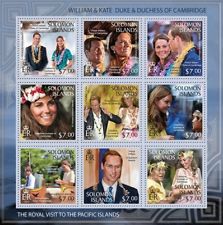 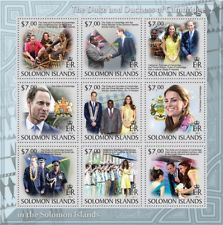 I also feature two other items - the first is the sheetlet which is devoted to the former South African President, Nelson Mandela, but has the added theme so that he is shown with "African minerals" though what the link between the two is I can not imagine and why Solomon Islands should be chosen to link the two subjects together will probably remain a mystery for ever:- 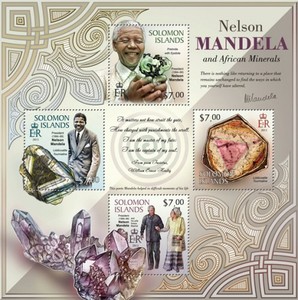 An equally perplexing riddle is why Solomon Islands was chosen to feature English medieval castles on its philatelic items, there being no connection between the country whose name appears on these philatelic items with the subject matter whatsoever, as far as I can see:-