In South Africa, the apparently deteriorating health of the man usually seen as the father figure of the modern South African state, Nelson Mandela, continues to cause great concern to the people of that country. After many years of imprisonment by the previous governments of that country whose policies were based on separate development of the different races which make up South Africa, a policy known as Apartheid, Mandela was eventually released by his jailers and was elected the first President of the newly democratic South Africa in 1994. A set of 4 stamps, issued on 10 May 1994, commemorated Mandela's Presidential inauguration and a portrait of him appeared on the 45c value as shown above, while the other values depicted the new South African national anthems (70c), the new national flag (95c) and the Union Buildings in Pretoria (1R 15c).
Mandela's dignity and remarkably wise leadership ensured that in the early years of its democracy South Africa followed policies which resulted in a peaceful transition to a modern state and this made Mandela a much respected and greatly loved figure across the entire Commonwealth and rest of the world so that many countries have issued stamps in recent years which depict him, such as the Maldives stamp illustrated below:-

Nelson Mandela's 90th birthday in 2008 was a cause of great national celebration in South Africa and the South African Post Office marked the occasion with the issue of 2 excellent miniature sheets which depicted 2 portraits of the grand old man. The items were issued on 15 July 2008 and were designed by Halden Krog and Cyril Coetzee:- 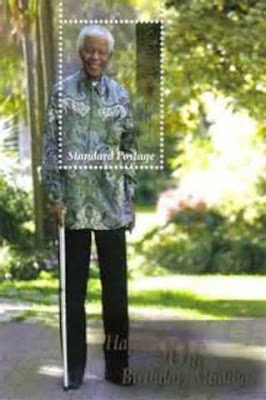 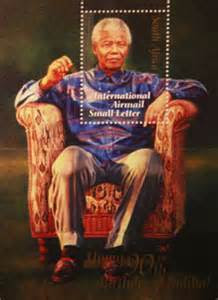 There can be little doubt that there will be a large number of Mandela stamps issued by countries from all round The Commonwealth in the future and there can be few subjects which are so deserving of philatelic commemoration as this heroic figure.
The latest stamp issue of Malta is a set of 2 stamps which depict wild and domestic fauna. The 2 stamps, the E0.37 of which is also issued as part of the annual SEPAC series, were released on 29 June 2013 and were designed by Cedric Galea Pirotta and lithographed by Printex of Malta. The 2 creatures depicted are a rabbit and a Maltese ox:-

The latest set of stamps from Mauritius was issued on 29 May 2013 and was a set of general anniversaries and events commemorative stamps. Two of the lowest values, the Rs2 and Rs6, commemorated  Maurice Ile Durable, the Rs3 commemorated the 150th anniversary of the International Red Cross and the Rs18 value commemorated the hosting by Mauritius of the FIFA Congress on the island.  The Mauritius Post Office provided 2 first day covers for the set - the 3 lowest values were included on one cover and a special additional cover was provided for the FIFA set. It has been noted that the lowest values of the set do not cover any particular postal rate and it is thought that they may be intended as make-up values for an impending rise in postage rates in Mauritius. 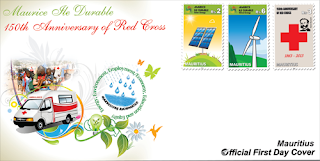 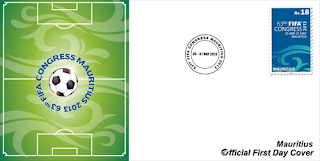