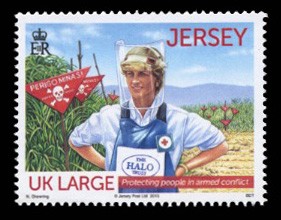 The latest set of stamps to be issued by the island of Jersey will be issued on 8 May 2013 to commemorate the International Red Cross and consists of 6 stamps, one of which features a picture of the philatelically popular and often-exploited late Diana Princess Of Wales (above), and a miniature sheet which has a face value of £2:- 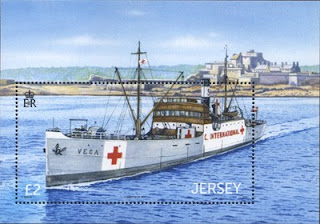 Meanwhile, The Isle Of Man also tries to appeal to the collector of modern personalities-on-stamps by the issue on 24 April 2013 of no less than 8 stamps which commemorate the late Robin Gibb, whose family lived on the island when he and his brothers were young children and who joined his brothers in forming the internationally popular musical group, the Bee Gees:- 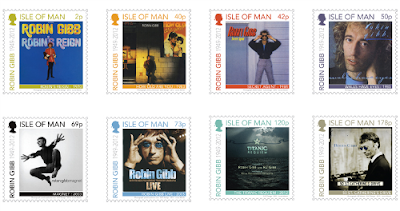 As part of the issue, the Isle Of Man Post Office will also issue yet another of their "label sheetlets" which are not only expensive but also usually too large to fit into an ordinary stamp album which are two good reasons for me to have given up collecting them. No doubt "Bee Gees" enthusiasts will rush to buy the sheet though what they will do with it when they have bought it I don't know:- 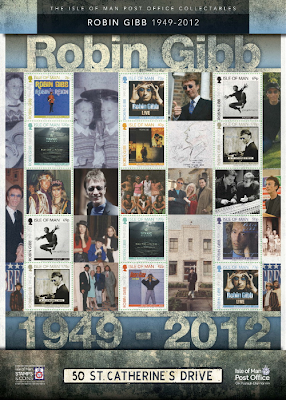 Other forthcoming issues from The Isle Of Man are a miniature sheet which will be released on 21 April 2013 to add to their commemoration of the 60th anniversary of the coronation of Queen Elizabeth II:- 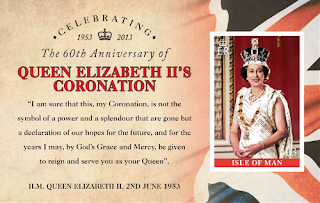 a set of 6 stamps which will be issued on 17 May 2013 which features railways on The Isle Of Man:-

and another large set of 8 gummed and 2 self-adhesive stamps from booklets which depicts various renditions of the Trinacria, the "Three Legs Of Man", the national emblem which appears on the Manx national flag:- 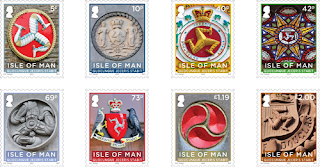 Finally, Australia issued 5 gummed and 2 self-adhesive stamps (the latter from sheetlets of 5) on 2 April 2013 which depict appealing pictures of young creatures from the Australian bush:- 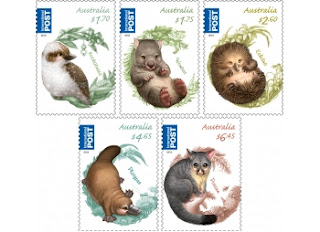