"Goodness Doctor, Your latest regeneration has certainly brought on quite a change in you. For a start you have become female and you look like a, er, dog, if you don't mind me sayimg so!".

One of the favourite characters of an earlier period of the BBC television programme, Dr.Who, was Doctor Who's robotic dog who went by the name of K9. So far, K9 has not been depicted on any of the stamps issued by Royal Mail in their extravagant issue which commemorates the 50th anniversary of the programme. However the personalised sheetlet which has been produced as part of the issue offers every dog owner the chance not only to make their dog a Dr Who companion but a "Future Dr Who" himself. This opportunity is available to cat owners, parents, proud grandparents, people who have secretly wanted to be Dr. Who themselves and anyone else with any particular reason to send out personalised stamps. Personalised stamps are ordered on line and a sheet of 10 Tardis stamps plus 10 personalised labels costs £9.99p, a sheet of 20 costs £18.25, 10 "International Europe" (68p ) sheet costs £13.90" and 10 "International Worldwide" (£1.10p) stamps cost £18.50p. Thus my newly bought sheet of 20 stamps proudly announces that Lucy Knight, my labrador, is a "Future Dr. Who", her mission in the year 2013 is doing what she does best (apart from eating) which, of course, is "retrieving".

This Dr. Who issue certainly is great fun even if it is proving to be remarkably expensive and although it is said to be popular with the mail-sending public, I have yet to see any genuine commercial mail coming through the post with any of the Dr. Who  stamps applied to it.
I have only just received a copy of the Sri Lanka peony stamp which, I believe, was issued on 10 March 2012:- 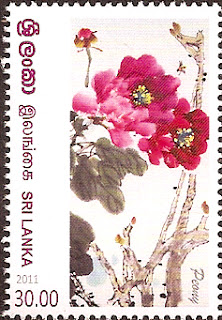 There are a number of new issues around at the moment on the subject of flora and natural history in general. Canada issued 2 stamps which depict magnolias on 4 March 2013 and these are available in 3 formats:- self-adhesive from booklets and coils and gummed in miniature sheet format:-

Bangladesh issued 8 stamps in a sheetlet on 13 January 2013 on the subject of migratory birds. They were designed by Enam Al Haque and lithographed by The State Printer at Gazipur:- 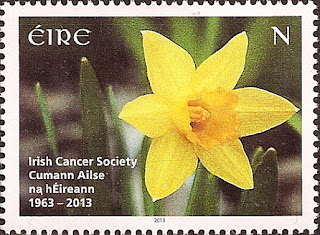 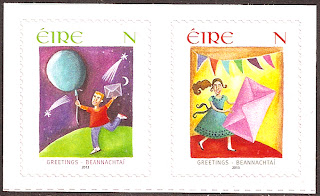 Returning to Royal Mail, I was pleased that although Royal Mail will install Hytech Post And Go stamp machines at several philatelic fairs during 2013, only those at Stampex and the 84th Scottish Congress in Perth will produce stamps with special inscriptions applied. This clearly is a financial help to collectors but I still wish it were not necessary to produce 2 different designs at the same exhibition - thus, as at previous stamp fairs, we have had Post And Go stamps produced for Perth not only in the "Union Jack" design but also in the "Machin" format, 2 sets instead of one. I must also say, that the constant repeating of designs - be it Machin head, Union Jack or Christmas Robin, is now also becoming rather boring and I wish that Royal Mail would come up with a new design to use under these circumstances. 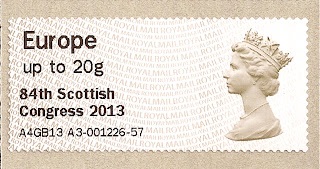 Just issued, but I do not know the precise date, is a set of 4 stamps and a miniature sheet from Belize to commemorate the 60th anniversary of the Coronation of Queen Elizabeth II. These are very attractive and preferable to the "Royal Occasion Souvenirs" omnibus which has been appearing with issues from a number of territories recently:- 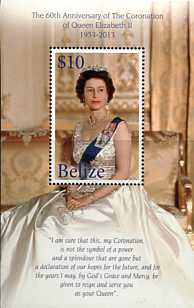 Finally. some pleasing new issues from Cyprus. Three stamps were released on 3 March 2013 to commemorate Easter:- 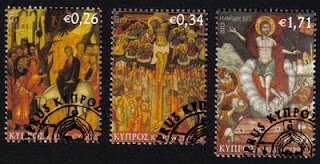 and on 3 May 2013 a further floral issue will be released in Cyprus' Fragrant Plants series, a single stamp and a miniature sheet which depict oregano:- 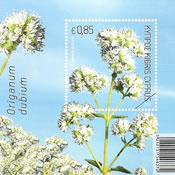 with the Europa issue also appearing on the same date. In line with the 2013 Europa theme of postal vehicles, there are 2 stamps and a booklet in the issue. Interestingly, both designs also show postboxes, both of which appear to be gold in colour. Is that the usual colour for Cypriot postboxes or have they been painted in the colour to tie up with Olympic victories as Royal mail did in the home cities of Olympic gold medal winners of 2012 (though I guess that that is not the case as I think Cyprus won a silver but not a gold medal)?:-