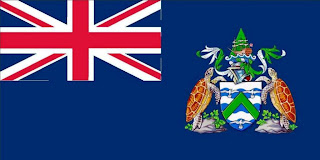 Mark Capes, the Governor of St. Helena and Tristan Da Cunha and Ascension Island recently announced that the latter, itself a dependency of St. Helena, would fly its new national flag for the first time on Saturday 11 May 2013 which is Ascension Day, after which the island was named when it was discovered in 1503. The flag is a Blue Ensign with the coat of arms of the island placed at the fly and the arms were granted by Queen Elizabeth II in May 2012 in connection with her Diamond Jubilee. Until then, Ascension was the only Overseas British Territory, apart from the Sovereign Bases Of Akrotiri And Dhekelia, not to have its own national flag. Ascension commemorated the 60th anniversary of the coronation of Queen Elizabeth II with a set of 5 stamps and a miniature sheet issued on 6 February 2013. The stamps depicted motifs from souvenir items of previous notable royal events:- 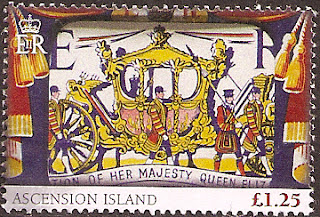 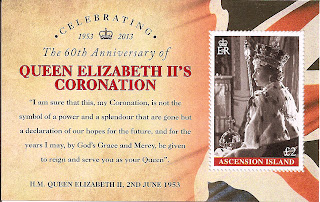 Up until the adoption of the new flag, Ascension had flown the Union Jack but the island has issued a set of 4 stamps on 1 April 1997 which depicted flags connected to the island - the merchant flag or "Red Ensign", the RAF flag, the NASA emblem and the naval flag, the "White Ensign". The stamps were designed by Anthony Theobald and lithographed by Walsall Security Printers:- 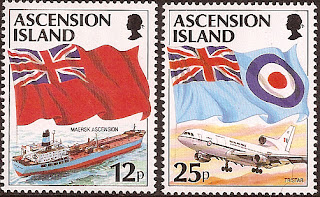 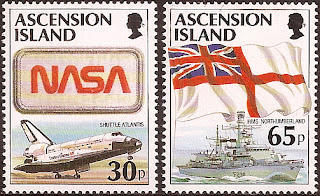 St. Helena adopted its current flag on 30 January 1984 when a new flag badge was adopted, replacing one that had been in use since 1876. The new badge depicts a wirebird over the sailing ship which appeared on the original badge. The St. Helena Post Office issued a booklet of 12 x 35p self-adhesive stamps on 19 August 2008 which depicted the national flag:- 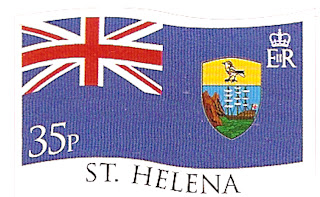 Tristan da Cunha, a dependency of St. Helena from 1938. adopted a flag by Gubernatorial proclamation on 28 October 2002 with the badge depicting the island's arms which consisted of a diamond at the centre white over blue, representing the island, with 2 albatrosses in flight at the chief and supporters of 2 crayfish with a naval coronet as the crest under a depiction of one of the local longboats. A booklet of 12 x 30p self-adhesive stamps, similar to the St. Helena booklet, was issued on 27 July 2004. It was designed by the Crown Agents and lithographed by Walsall Security Printers:- 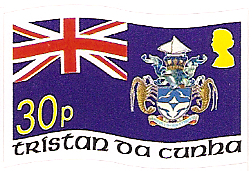 Tristan had issued a set of 4 stamps on 30 September 1985 which depicted previous flags of the island. The 10p value showed the flag used by the short-lived settlement on Tristan in 1811 which had been founded by Jonathan Lambert. The 15p showed the flag of the 21st Light Dragoons, stationed on Tristan in 1816 and the 25p depicted the White Ensign to represent the period 1944 to 1946 when the island was known as HMS Atlantic Isle. The Union Jack was used from 1816 to 2002 as the national flag and is shown on the 60p value:- 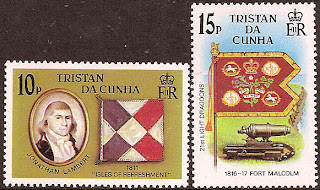 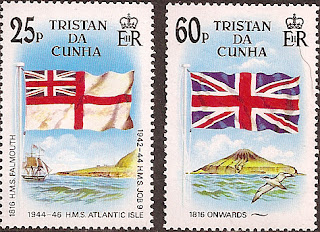 Some issues also appeared with the national flag of 2002 printed in the gutters, the example below is the 60p value of the 2008 set which commemorated the designer of Tristan's famous "potato stamps", Allan B Crawford:- 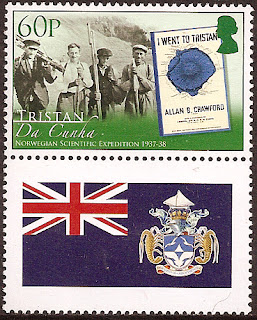 CASCO continue to print local flags in gutters separating sheets as evidenced by this recent issue from The British Antarctic Territory which shows the flag flown locally on research vessels in the territory:-

A stamp issue to commemorate the first flying of  Ascension's new flag would be very interesting and I look forward to seeing if Pobjoy Stamps, Ascension's philatelic agents, prepare such an issue on the island's behalf.