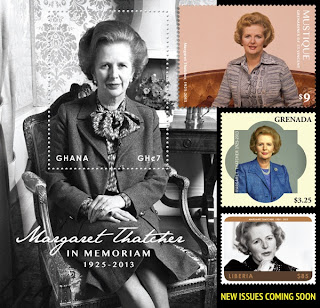 Only 2 days after the dignified and impressive ceremonial funeral of Baroness Thatcher, the first female British prime minister, a large New York-based philatelic agency has indicated that it will be producing a large range of stamps with the names of a number of their client postal administrations printed on them although precise dates of issue are not yet given. The advertisement indicates that Ghana and Grenada will be among the territories for which these items are produced and this suggests that as many as about 20 Commonwealth territories served by this large agency will be part of what will be a storm of issues which ostensibly honour this notable stateswoman although they will also provide a potentially large amount of income for the agency which is producing these items.
Meanwhile, The Maldives which was a client territory of the same agency for decades but which does not seem to have used their services since 2010 (I wonder why) is currently advertising on their website for tenders for a new philatelic agency to produce and philatelically market stamps for them. I do hope that The Maldives can resuscitate their international philatelic reputation by choosing an agency such as Pobjoy Stamps or New Zealand Post to carry out this work for them rather than one of the more exploitative agencies that exists and gradually seem to be gaining increased influence in these small nation states. It really would be wonderful to find the stamps of The Maldives being placed at the top of collectors' want lists since there is so much natural beauty and interest in this little island state to be the inspiration for some excellent stamp designs.
On the subject of island states, Bahamas will issue a set of 6 stamps on 15 May 2013 to commemorate the 120th anniversary of the Bahamas Royal Police Force Band (depicted below). The stamps are printed in lithography by BDT International and make interesting designs to add to a Bahamas or music collection:-