233. Malta, Gibraltar And Akrotiri And Dhekelia.

Malta has issued some interesting stamps for the beginning of 2013. A miniature sheet was issued on 15 February which commemorated the 900th anniversary of the Papal Bull given by Pope Paschal II in 1113 which confirmed the Blessed Gerard Thorn as the founder of the Knights Hospitaller which became the Knights of St. John. Blessed Gerard had founded the Knights in 1023 to care for sick, injured and poor pilgrims to the Holy Land and when Jerusalem had been conquered by the First Crusade in 1099 the Knights became a religious and military order under charter to protect the Holy Land. A painting of Blessed Gerard is featured on the E2.47 stamp contained in the miniature sheet:- 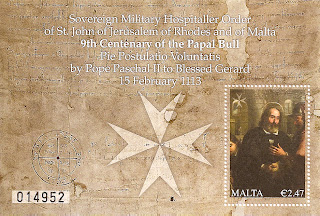 On 24 February 2013, a second miniature sheet was issued on the actual date of the 400th anniversary of the birth of the Italian baroque artist, Mattia Preti, who was known as Il Cavalier Calabrese, the Calabrian Knight. He was born in Taverna in Calabria in 1613 and was apprenticed to the "Caravaggist" artist, Giovanni Battista Caraciollo. After becoming a Knight of the Order of St. John, he visited Malta and was to live there for many subsequent years, carrying out a considerable amount of work in St. John's Co-Cathedral in Valetta, much of it depicting the life and martyrdom of St. John The Baptist. He died on 3 January 1699:- 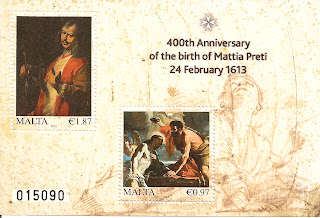 Other recent issues sold by Malta Post are a Greetings stamp with attached label which was produced to coincide with Spring Stampex in London, attended by a representative of Malta Post. The date of issue was 24 February 2013:-

Malta also released the latest issue in its "Treasures" series on 25 March 2013 when a set of 3 stamps appeared which featured fountains of Malta. The stamps were designed by Cedric Galea Pirotta and, as were all the previous mentioned issues, printed in lithography by Printex, Malta:- 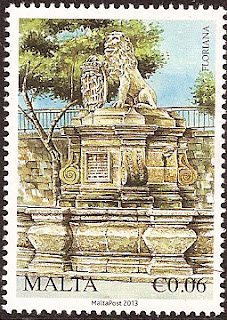 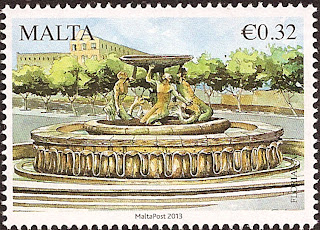 On 20 March 2013, Gibraltar issued a set of 4 stamps depicting RAF aircraft and a miniature sheet of 4 different stamps as the second issue in its RAF Squadrons series. They were designed by Stephen Perera and lithographed by Cartor:- 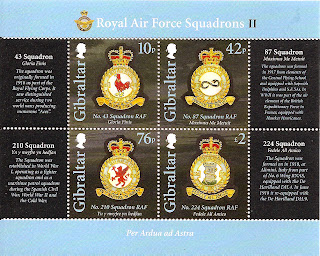 I have recently obtained another cover to add to my small collection of items which relate to the British Overseas Territory of the Sovereign bases of Akrotiri and Dhekelia in Cyprus. This item dates back to 1972 and is a first day cover of the British "General Anniversaries" set which was released on 26 April 1972. By modern standards it was a very modest issue and commemorated 3 very diverse anniversaries - the 50th anniversary of the discovery by Lord Caernarvon and Howard Carter, 2 British archaeologists, of the fabulous tomb of the Pharoah Tutankhamun in Egypt (3p), 150th anniversary of the Coastguard Service (7 and 1 half p) and the birth centenary of Ralph Vaughan Williams, British musical composer (9p). The stamps are cancelled by a circular date stamp, "FORCES POST OFFICE 124" and dated, as you would expect, "26 APR 72". The postmark apparently derives from Dhekelia:- 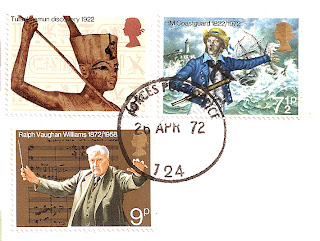 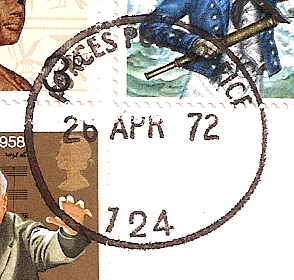 Finally, while we await news of a flood of issues from various Commonwealth countries to commemorate the succession of Pope Francis to The Pontificate, I look back at the stamp issues produced by Malta, one of the most devoutly Catholic countries, which have featured recent popes. The first is that which was issued on 15 April 2005 to commemorate the late Pope John Paul II:- 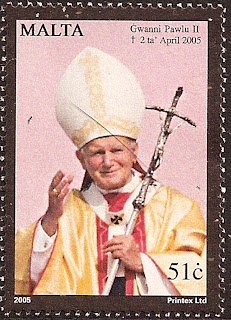 John Paul's successor, Benedict XVI, was featured on a miniature sheet issued on 17 April 2010 to commemorate the Pope's visit to Malta which was in connection with the 1950th anniversary of the shipwreck of St. Paul on Malta. A number of Maltese stamps have depicted St. Paul including the magnificent 10/- stamp issued on 6 March 1919 which was beautifully printed in black by intaglio and is depicted at the top of this blog. The design shows the saint standing on the Maltese shore, his right arm raised and the wreckage of his ship in the background.

The Maltese Post Office also issued an official postcard to accompany the miniature sheet and that depicted a portrait of Pope Benedict:- 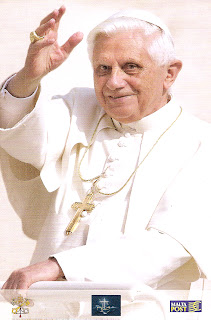 Finally, worthy of mention in this context, is a pair of stamps which were issued by Malta on 28 May 2007 to commemorate Malta's most recent own saint, St. Gorg Preca, on the occasion of his canonisation:-