229. Politicians Featured On Royal Mail Issues And Doctor Who Actors.

There is currently a controversy about whether Royal Mail should issue stamps to commemorate the late Lady Thatcher, the first female prime minister of The United Kingdom. Certainly politics is not a taboo subject for British postage stamps since 5 prime ministers of Great Britain have been featured previously in British stamp designs. The first British prime minister, Sir Robert Walpole, who held power from 3 April 1721 until 8 February 1742, was depicted on one of 4 stamps which were issued in miniature sheet form on 15 September 2011 as part of a set which depicted the Hanoverian monarchs and their times. The first of this German dynasty which succeeded to the throne of Britain, George I, spoke such a poor standard of English that he was unable to preside usefully at cabinet meetings and the senior minister of the time thus took on the job of doing so and thus established the post of prime minister. Walpole is considered to have been tolerant and worldly and possessing of great financial skills but at one time he was found guilty of corruption and, after retiring, accused of bribery. He clearly set a standard which modern-day politicians strive to emulate - witness the Parliamentary expenses scandal of a few years ago.

William Ewart Gladstone was depicted on a stamp issued on 8 October 2009 as part of a set of 10 which commemorated various "Eminent Britons". The stamp coincided with the bicentenary of his birth. He had 3 periods as prime minister, even though Queen Victoria loathed him, and his achievements included army reform, introduction of national primary education, Civil Service reform and passage of the third Reform Bill which extended voting rights. His ministry fell in 1886 because he failed to secure the rescue of General Gordon in The Sudan and he finally lost power when the Irish Home Rule Bill failed to pass. The latter issue was immensely divisive throughout the whole country and it is interesting that although he was a "divisive" figure, his greatness has allowed a stamp to be issued to commemorate him. It is the perceived "divisive" nature of Margaret Thatcher that is used by the opponents of an issue to commemorate lady Thatcher as a reason for them to argue that such a stamp should not be issued. Gladstone's arch-opponent, Benjamin Disraeli, was prime minister from 1874 to 1880. He was depicted on 1 of the 4 stamps issued on 8 September 1987 which commemorated the 150th anniversary of the succession of Queen Victoria.

Queen Victoria proved to be particularly susceptible to Disraeli's flattery and having secured the shares of the Suez Canal for Britain in 1875, he made Victoria The Empress of India the following year. He enacted social reforms - slum clearance, public health, trade union and factory Acts -- and at The Conference Of Berlin he secured for Britain "Peace with Honour" as well as the island of Cyprus. Disraeli wrote entertaining political novels and openly married for money.

Lloyd George, "The Welsh Wizard", was recently depicted on one of the 10 stamps which comprised the Great Britons" set issued on 16 April 2013.  The stamp commemorated the 150th anniversary of his birth. He was prime minister from 7 December 1916 to 19 October 1922 and negotiated peace with Germany at the end of the First World War and negotiated Irish Home Rule. He had ruthlessly ousted Herbert Asquith, the former prime minister, proving himself to be as disloyal to his political allies as he was to the women in his life.

Winston Churchill was the towering figure of British politics in the 20th century and the leader of Britain during most of the Second World War. He is the only commoner to have had a set of British stamps issued to commemorate him on his death: he died on 25 January 1965 and a pair of stamps was released on 1 September 1965. Great Britain also issued a  set of 4 stamps on 9 October 1974 which commemorated the centenary of his birth and a portrait of him appeared on 1 of the 10 stamps which were issued on 18 July 2006 to commemorate the 150th anniversary of the National Portrait Gallery. The stamp depicted above was issued on 13 May 2010 as part of set of 8 stamps which commemorated the 70th anniversary of the evacuation of British forces from Dunkirk after they had been trapped there because the French government had surrendered to the Nazis. The stamp was also included on the second pane of a £9.76p Prestige Booklet titled "Britain Alone" and issued on the same date as the basic set.

Prime ministers aside, other politicians have appeared on British stamps in recent years. The socialist former government minister, Barbara Castle, was depicted on 1 of a set of 6 stamps issued on 14 October 2008 to commemorate "Women of Distinction". 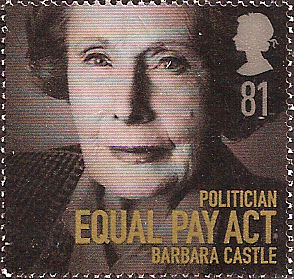 Another socialist, John Archer, was commemorated in the 2013 "Great Britons" set which is mentioned above because he was, according to the text of the official presentation pack, "the first mayor of African descent in London and the second in Britain". 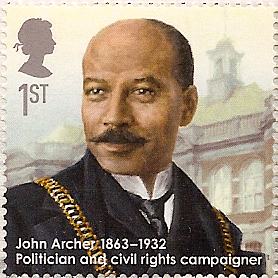 Many precedents have been set with the above previous issues to negate any arguments against the issue of a Margaret Thatcher commemorative stamp. Former prime ministers who have been depicted on previous issues have not been without their faults - one was found guilty of corruption, one divided the nation, one openly married for money and one was a ruthless womaniser.  Any faults that Baroness Thatcher may have possessed therefore do not exclude her from appearing on a postage stamp given her predecessors' records.
Fear that an issue of stamps to commemorate her would be divisive because some people would be angry to see her depicted on stamps is balanced out by the fact that it is equally divisive not to issue a set since there are many who positively want there to be a Margaret Thatcher commemoration. The pro-Thatcher stamps group can also point to issues in recent years which have unhesitatingly commemorated socialists and they can therefore claim that a political balance should be restored by commemorating this Conservative prime minister. They will also doubtlessly point out that if countries like Ghana, Liberia and, er, Mustique are issuing stamps to commemorate her then there is really no excuse for her own country to ignore her achievements by not commemorating her philatelically. They will say that she should be commemorated for the achievement of being the first female British prime minister just as John Archer was recently commemorated by a stamp because he was the, er, second mayor of African descent in Britain. Well, no doubt the outcome of this ongoing philatelic argument will soon be apparent and the public reactions to Royal Mail's decision will be very interesting to observe. It is pleasing to know that stamps can still generate public interest and even passion.
Enormous public interest was also generated recently by the Dr. Who stamp issue. To complete the set "Dr. Who" collectors might want to consider adding one or two other items. The 2013 "Great Britons" set also includes a stamp to commemorate the centenary of the birth of the actor, Peter Cushing, who played the character of Dr. Who in 2 cinema-released movies of the 1960's - he was, in effect, the 12th Doctor Who. On the stamp he is shown in the role of another iconic British character, Sherlock Holmes:-

The actor who played the first version of Dr. Who, William Hartnell, was also depicted on a British stamp which was issued on 10 June 2008 which was part of the set of 6 stamps which commemorated "classic" British films of the "Carry On" and Hammer horror series. Hartnell appeared as the sergeant-major in "Carry On Sergeant", the first film of the series and his image appeared at the centre of the poster which advertised the film:- 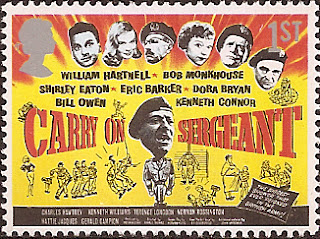 The actor who played Dr. Who number 10, David Tennant, was shown in the role of Hamlet on a stamp issued on 12 April 2011 which was part of a set of 6 with an accompanying miniature sheet that commemorated the 50th anniversary of The Royal Shakespeare Company:-

Finally, we must travel to New Zealand for a depiction of Sylvester McCoy, the 7th Dr. Who, who appeared on a stamp released in December 2012 to commemorate the first part of "The Hobbit" film series. This particular stamp was produced in various formats - gummed from sheets, self-adhesive from a booklet and a sheetlet and in a miniature sheet format as well:- 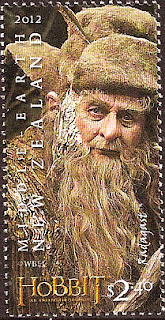