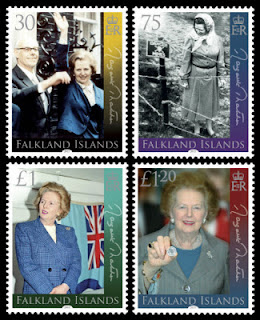 The Falkland Islands are clearly proud to be the first territory to announce the issue of a set of stamps to commemorate the life and achievements of Margaret Thatcher, the first British female prime minister. Lady Thatcher, whose ceremonial funeral is to take place at St. Paul's Cathedral in London on Wednesday 17 April, led Britain at the time of the invasion of The Falkland Islands by armed forces of Argentina and she provided the brilliant leadership which eventually resulted in the defeat of the occupiers and the return of British rule in the islands. It is therefore not surprising that The Falkland Islands Post Office has hurried to honour this remarkable leader. The set of 4 stamps depicted above, will be issued on 16 May 2013 and was designed by Andrew Robinson and printed in lithography by BDT International. The 30p value depicts the then Mrs. Thatcher standing outside of the home of the British prime minister, no. 10 Downing Street, with her husband, Dennis, and the 75p shows her on a visit to The Falkland Islands after the conflict which had occurred there. Together with 2 other portraits of Baroness Thatcher these values make up a historic set which is bound to be in demand to purchase by her many admirers.
Posted by White Knight at 09:57