230 Why Don't Bureaux Use Their Own Stamps? 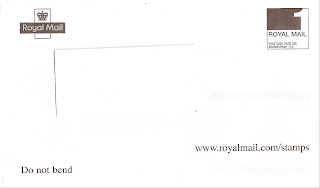 I buy quite a lot of my new issue stamps directly from philatelic bureaux and I am always surprised that all from whom I buy, with just one exception, never use stamps on the packaging which they send to me with my purchases contained inside. Why don't they put their postage stamps on the return envelopes? What sort of businessman makes a point of not using himself the product that he is trying to sell to others or not using the service himself which he is offering to the public? Is it just that the philatelic bureau are so keen to screw every last penny out of their customers that they can not bear to give their customers free stamps on the return mail ? Actually, as the customers have to pay for the return postage, any stamps used would not be free at all - the customers would have paid for them. And it's not as though return postage is cheap - Australia Post charges A$9 to send a packet with a few stamps inside to the UK. They are the first of the villains - no stamps used on mail from Australia Post. Nor on mail from Canada Post either. What about Royal Mail - any chance of a Dr Who stamp appearing on covers from that organisation? The answer is a resounding no as the cover depicted above and the imprinted postage paid mark shown below, clearly demonstrate. 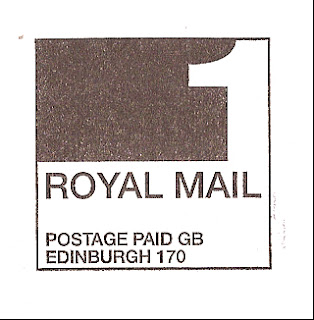 If you buy stamps from Harry Alan which is linked with CASCO you get your stamps sent back to you in the type of packet shown below:- 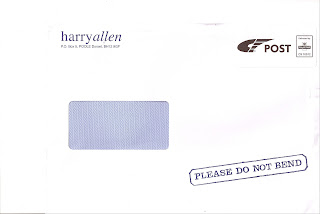 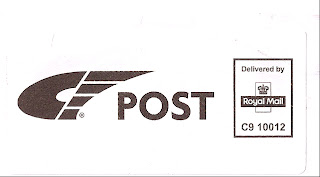 So Harry Alan can not be bothered to use stamps on its mail as a service to its philatelic customers - a pity as the postage and packing on the above item was £2.12p. And the offshore islands - how do they treat their customers? Money-grabbing Jersey Post, famous for the diamond-studded £120+ stamp, and the equally greedy Isle Of Man Post Office's Philatelic Bureau, not surprisingly return customer's purchases in stampless covers. The Isle of Man has imprinted "stamps" on the covers as shown below:- 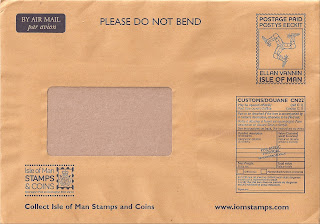 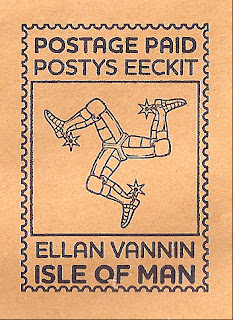 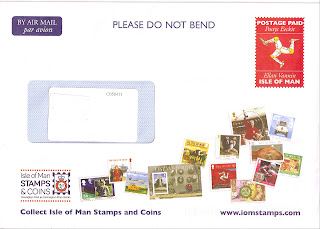 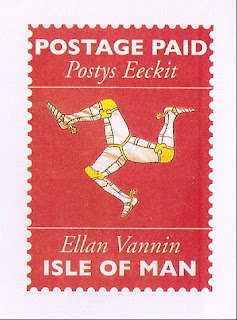 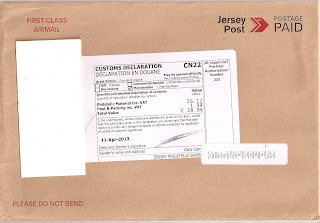 But what about Guernsey? Three cheers for Guernsey! Guernsey Post Office uses proper postage stamps on its mail to philatelists and very attractive little covers turn up ever so often. Guernsey go to the top of the Philatelic Bureau League for this consideration of its customers and interestingly they are by far the most efficient in mailing purchases back to their customers especially compared with its sister  Channel Island, Jersey. It is notable that Guernsey Post Office Philatelic Bureau also recently mailed gratis to all its standing order customers a copy of its Gold Post Box miniature sheet. Such generosity is rare on the modern philatelic scene and establishes Guernsey as standing head and shoulders above other philatelic bureaux around the whole Commonwealth for customer care and making their customers feel valued. Perhaps a few other bureau managers could go along to Guernsey to learn how the job should be done properly.
Elsewhere in The Commonwealth, the story is as depressing as it is in the British Isles (with, of course the shining exception of Guernsey). Malta sends its mail out in illustrated envelopes but sometimes there is not even a postage paid imprint, merely a cancellation:- 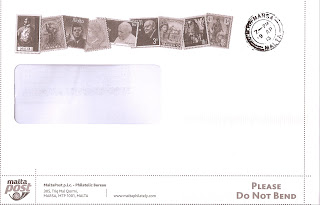 or, alternatively you may fond a meter mark applied to the cover:- 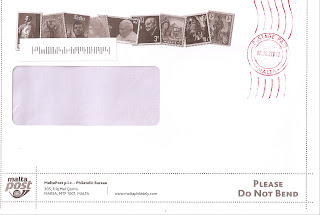 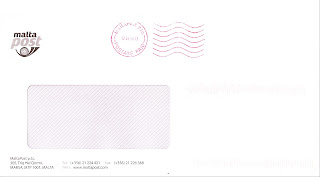 Gibraltar is equally mean in not using postage stamps on its mail. I have a couple of covers which are vaguely interesting in that one has a printed postage paid mark on it :- 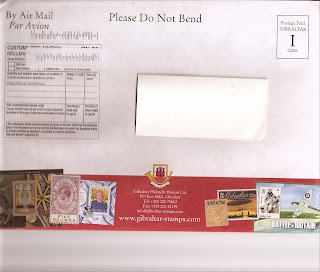 while the second has a hand stamp applied to it:- 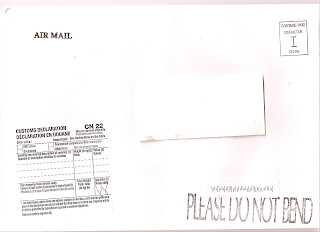 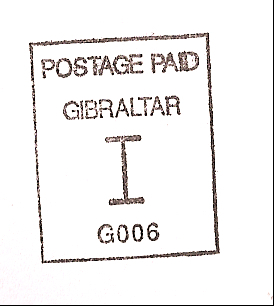 Further afield, New Zealand Post has not been tempted to stick a Hobbit stamp on its mail to philatelists:- 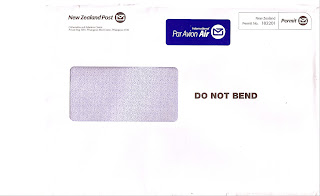 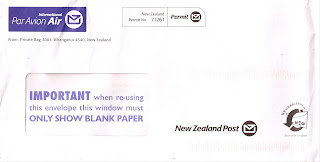 and the Singapore Philatelic Bureau uses a printed postage paid mark on its mail although the mark does at least have a pictorial image of the impressive building which houses the Singapore Post Centre:- 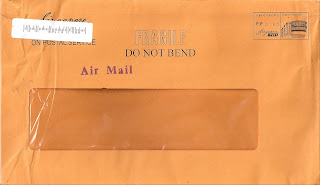 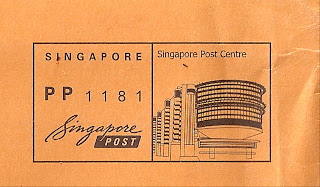 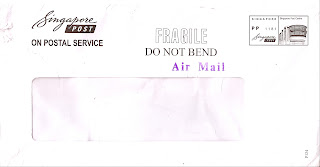 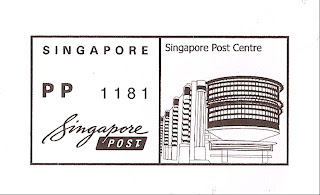 Really, the non-use of real postage stamps on mail from philatelic bureaux around The Commonwealth is lamentable and really raises a fundamental question - if the people selling stamps do not use them what is the point of collecting something which has clearly become of no practical use? All of the philatelic bureaux - apart from Guernsey - show a form of contempt for their customers, the collectors, and this is just an extension of the way in which they continue to flood the market with increasing numbers of expensive stamp products which are often of poor design and have little relevance to the country that is issuing them. Where will it all end? The end of new issue collecting may be closer than these bureaux think it is.
But the bureaux are not the only villains, a leading stamps dealer, Stanley Gibbons, does not use postage stamps on its mail either. That fact is somewhat jaw-dropping - if a leading commercial seller does not use stamps then it really does make you think that stamp collecting is a true nonsense. Oh dear, I wonder if I should give it all up now. Any thoughts?
Posted by White Knight at 06:31