No. 171. Perth Post And Go, Serious Mozambique Philately And Other New Issues.

I have now received my examples of the "Perth 2012" "Post And Go" stamps which were sold for 3 days only from Hytech machines at the 94th Philatelic Congress Of Great Britain, held in the city of Perth in Scotland from 19 to 21 October. I have already discussed these in the blog of 10 October 2012 and so I will not repeat my complaints about these stamps. They obviously had extremely limited availability and were not available to the general public for use on ordinary mail and in producing them Royal Mail has placed itself in the same catagory of stamp producers as the agency which produces stamps for The Cook Islands (see blog no. 170). This will be the last of such issues that I add to my collection as it is quite obvious that Royal Mail believe that they have found a new way of bleeding collectors of their money whilst cynically claiming to have reduced their annual number of stamp issues by cutting back a little bit on the total number of normal commemorative sets issued per year. This is another golden goose they have slaughtered by displaying unsubtle greediness. They have already announced that this year's Christmas issues will be accompanied by Post And Go Christmas stamps but they at least will be available to the ordinary public from machines in normal post offices and will even probably be quite popular, so I will add those to my collection as an illustration of a further episode in the story of British stamps.

In the face of the activities of Stamperija, it is still possible to collect the stamps of Mozambique since the country joined The Commonwealth because of the fascinating locally surcharged stamps which were released from 1998 onwards to supply new values for genuine postal use. These stamps, as previously discussed in a number of my blogs, offer a true philatelic challenge to the interested collector and Stanley Gibbons has not yet been able to publish a comprehensive list of them in its catalogue. I have recently obtained another example of these stamps - 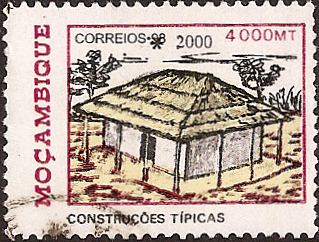 This stamp, the 4000 MT value of the 1998 traditional buildings set, is not surcharged but overprinted in black with a single six-pointed star and "2000" and is mentioned in a list of stamps with this overprint in a note in Gibbons' most recent catalogue of the stamps of South and Central Africa. The note mentions 7 other similarly overprinted stamps including the 6000, 10000 and 15000 MT values of the same set. Up to now, though, I have not personally seen any of the other stamps.

Cayman Islands has released a new set of 12 definitives which depict marine life and which are also rather expensive to buy as a set, the total face value being approximately £38.54 because the set includes $10 and $20 values, the latter therefore being about £12.30 face value. Why Cayman Islands needs to issue such a high face valued stamp is not clear and the stamp itself is not of any special design nature - merely a photograph with some lettering and the Queen's head added to it. Every time a stamp collector buys the stamp, the Cayman Islands Post Office will be laughing all the way to the bank. Otherwise, two reasonable sets from CASCO countries - 4 stamps depicting scenes of the port of Bridgetown from Barbados and 4 stamps from Bermuda which commemorate St. Peter's Church on the island. So typical now of the lazy designs produced by CASCO, again they are nothing more than photographs with lettering applied by a computer (how hard is that?) but at least the sets do not include $20 values.