An area of interest in which I have not previously dabbled, is the personalisable "Picture Post" stamps of Canada Post. My attention to this area of modern Commonwealth stamps was attracted by the appearance of a "Picture Post Collector's Pack" among the latest of new issues to appear from Canada Post. The item in question will be released on 5 November 2012 and "includes 12 thematic designs"and, states Canada Post, this is "a rare opportunity to buy the entire redesigned 2012 Picture Post stamp series". 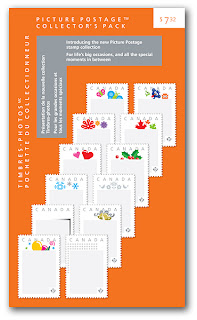 The collector's pack (shown above) contains 12 new designs which include "holiday, celebration, special event and seasonal motifs as well as two simple and contemporary designs...suited to business mail". The 12 stamps in the pack comprise blank die-cut stamps from the PERMANENT domestic rates sheets of 50, each design featuring a different frame to which can be added the individual picture to personalise the stamp. The designs are by Stephanie Hunt. The problem with  the pack appears to be that it does not represent all the stamps included in this issue since there are 4 denominations (PERMANENT, domestic, US international and oversized mail), each issued in 3 formats:- sheet of 25 plus 1 stamps, sheet of 50 stamps and a booklet of 12 stamps. This seems like something of a nightmare for the completist so I think I will be satisfied with the representative examples easily obtained by buying the collector's pack which is not terribly expensive at $7.32. The website of brc stamps

In retrospect, it is not clear to me why the stamps were not supplied with the personal picture printed inside the frame rather than having to be placed in the frame by the customer. I suppose the designer, Steven Spazuk, thought that this represented a form of audience participation. A second issue of Picture Post stamps appeared in 2004 entitled "Write Me Ring Me" and the stamps were indeed provided with the personal design already printed in the frame rather than the customer having to construct their own stamp. The relaunch included the issue of a  "special collector edition" which depicted a maple life provided in 2 different frame designs in the domestic postal rate and issued on 8 October 2004. The 2 frame designs were released in sheets of 20. Attached to the sheet was a "keep-sake souvenir sheet" which contained an enlargement of the design as well as a single example of the stamp. The stamps could also be bought in sheets of 40 without the accompanying souvenir sheet panel. The stamps were again designed by Steven Spacuk as well as Jean-Francois Renaud and lithographed by The Canadian Bank Note Printing Company.
In November 2011, six new Picture Post stamps were produced to be used on mail for various "ethnic festivals" - 2 different designs each for Hannukah, Diwali and Eid. Below is depicted one of the sheets of 25 and its attached "keep sake miniature sheet" which celebrated Eid. 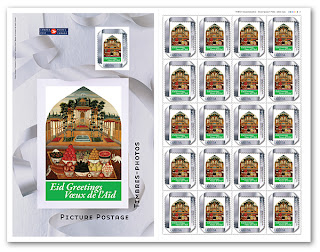 Also in November 2011, 3 different designs were released which commemorated the Winnipeg Jets ice hockey team. Finally, of considerable noteworthiness is the issue of 19 July 2003 which was a joint project of Canada Post and the Royal Caribbean Cruise Line and which consisted of a sheet of 10 stamps (5 x 2 different designs). The stamps were sold on Royal Caribbean Cruise Line ships sailing between Canada and Alaska and the passenger's photograph was printed in the frame at the right side of the stamp. To the left of the sheet was a "keep sake souvenir sheet" which consisted of 3 non-postally valid labels which were in the same format as the stamp designs. The cruise company was supplied with 40000 stamps and 10000 were sold by the Canadian Philatelic Centre. The stamps were sold at the International postage rate prevailing at the time of sale (initially 48c). The design was by Geoff Kehring and the stamps were lithographed by Ashton Potter. 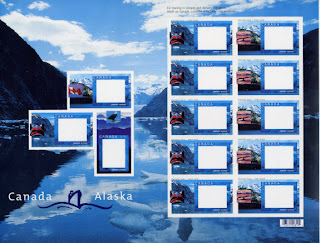 Meanwhile, six items apparently from South Sudan are currently being auctioned on E Bay by a vendor in China. These are said to commemorate the first anniversary of South Sudan's independence and include stamps with much higher face values than we have previously seen (SSP5, 10, 20 and 50). Clearly they have thematic appeal (bird and animals) as well as depicting the correct version of the country's coat of arms on the top value. One suspects that are yet another gift to South Sudan from the Chinese government and also, apparently, to certain Chinese citizens who have an access to these stamps. I for one shall hold off trying to obtain these stamps until it becomes clear just what their availability is in South Sudan itself and whether they are finding their way into South Sudan post offices rather than providing a source of income for Chinese citizens who seem to have a strange access to the items.