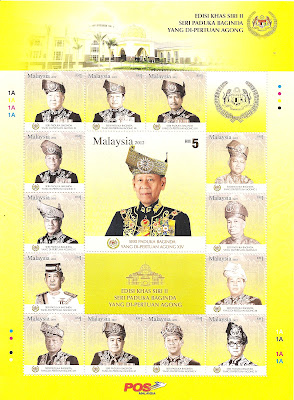 Malaysia has issued a sheetlet of 14 stamps which depicts all the kings of Malaysia since the Malayan Federation became an independent Kingdom with the Head of State being elected every 5 years. Thirteen rulers are depicted because the current king has occupied the position twice and uniquely among world monarchs has the distinction of 2 regnal numbers as he became the Seri Paduka Baginda Yang Di- Peruan Agong XIV on 13 December 2011 having ruled Malaysia as Seri Paduka Baginda Yang Di-Pertuan Agong V for 5 years from 21 September 1970 to 20 September 1975. The first 3 monarchs were:- Tuanku Abdul Rahman (Seri Paduka Baginda Yang Di-Pertuan Agong I) who ruled from 31 August 1957 to 1 April 1960 - he was the ruler of Negeri Sembilan and died in office; Sultan Hisamuddin Alam Shah of Selangor (14 April 1960 - 1 September 1960, also died on office) and Tuanku Syed Putra of Perlis (21 September 1960 - 20 September 1965):- 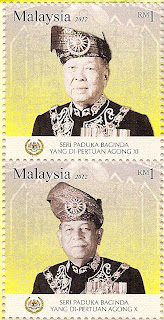 Tuanku Syed Sirajuddin of Perlis (SPBYDPA XII) ruled from 13 December 2001 to 12 December 2006 and Tuanku Mizan Zainal Abidin of Terenganu was ruler from 2006 to 2011 when the current ruler succeeded as detailed at the top of this piece. 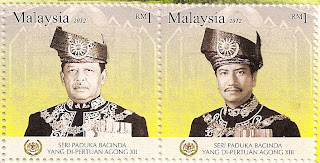 The central stamp of the sheetlet is larger than the others and depicts the present king:- 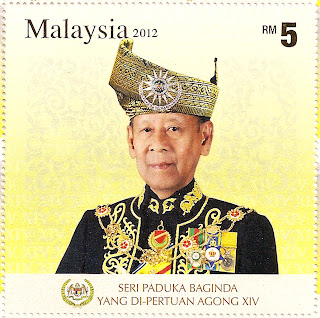 A number of items have become available from last year's Indipex Philatelic Exhibition which are various stamps issued with personalisable labels attached to them. The exhibition was held from the 12th to the 18th February 2011 and the items which I have obtained are a sheetlet of 12 stamps and 12 labels, the stamps in the form of 4 designs, all Rs5.00, which depict animal stories:- 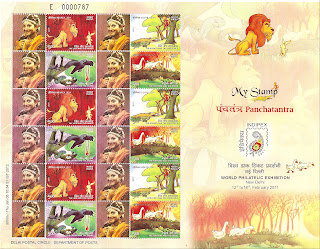 and the 12 Zodiac stamps of 2010 were reissued with personalisable labels as well as the inscription "INDIPEX 2011" and imprint date "2011". 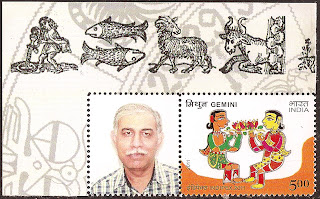 A Rs 5.00 stamp which depicts the Taj Mahal was also issued with an attached personalisable label. Meanwhile, the more normal Indian issues continue to appear, some remarkably mundane such as the single stamp issued on 9 June 2012 which commemorates the 50th anniversary of the Customs Act. 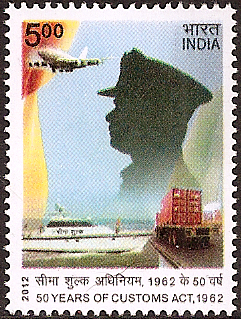 Some more recent Sri Lanka stamps have also arrived including a single perforated 5.00 value and an imperforate miniature sheet of 4 x 5.00 stamps, issued on 22 February 2012, to commemorate the centenary of scouting in Sri Lanka:- 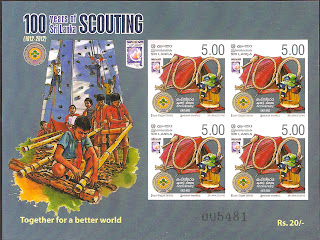 a single 5.00 stamp which commemorates the centenary of the Ceylon School For The Deaf And Blind which has Braille writing across it:-

and a 6.00 value which was issued on 9 February 2012 to commemorate the 25th anniversary of The Institute of Chartered Shipbrokers UK Sri Lanka Branch:-

The Cayman Islands have issued 5 sports stamps to coincide with the London Olympic Games but notably they do not carry the Games logo or 5 rings emblem and approval would have only been given for a set of 4 stamps, so whether you should call this an Olympic Games issue or just a set of sports stamps is a debatable point:-