I have recently obtained some items which were issued a year or two ago of which I was not previously aware. In my blog of 1 October 2012 I illustrated some personalisable stamps which had been issued for the Indipex 2011 International Philatelic Exhibition and I now depict 2 more sets that have come my way. Again, each stamp has the inscription "Indipex 2011" and a  label attached for personalisation. The 2 sets depict aircraft and railway engines:-

Going further back to 2012, I have also just obtained a set of 5 miniature sheets issued by the Sri Lankan Post Office which comprised of previous issues overprinted "National Stamp Fair Colombo - 2010", each having a different day of issue inscribed on it:- 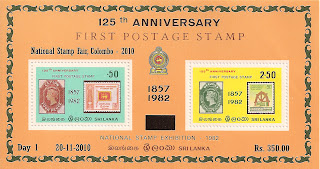 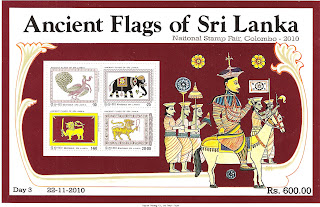 The remaining issues were:- Day 4 23-11-2012, Birds of Sri Lanka miniature sheet of 1 December 1983 revalued from Rs22.60 to Rs650 and Day 5 24-11-2012, Flowers of Sri Lanka originally issued on 1 April 1982 and revalued from Rs29.35 to Rs750.
Cyprus made a pleasing issue of a booklet of 5 self-adhesive stamps on 3 October 2012 which was the second in its series of issues which feature stories from the fables written by Aesop. This year's design depicts scenes from the story of the cricket and the ant which I do not actually know and unfortunately I remain ignorant about because the text on the booklet is inscribed entirely in Greek which I do not read.  The first part of the series was issued on 5 October 2011 in a similar format and style. 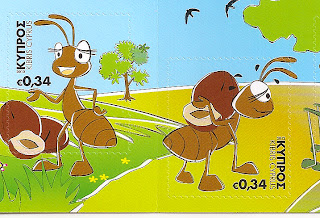 One of the more remarkable recent items is the miniature sheet or sheetlet (I'm not sure which is the most appropriate term) which was released by Malaysia on 16 July 2012 which is part of the 2nd series of Malaysian currency stamps. This sheetlet features three banknotes on perforated stamps on backgrounds which themselves can be separated from the rest of the sheetlet because they are surrounded by rouletting, thus I suppose you really have a sheetlet containing 3 miniature sheets each containing 1 stamp! 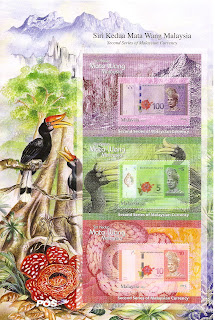 Finally, staying in south-east Asia, I depict the single $50 stamp from the miniature issued by Brunei Darussalam in 2011 to commemorate the golden jubilee of the country's armed forces which I previously mentioned in the blog of 21 October 2012. 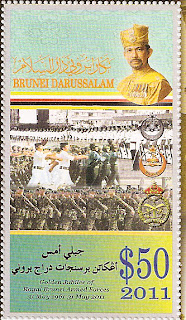