On 13 September 2012, Malaysia joined the growing list of Commonwealth countries which have issued stamps to commemorate the Diamond Jubilee of Queen Elizabeth II. The issue proved popular with the Malaysian public forming long queues to buy the stamps at some post offices, The issue consisted of 2 stamps and 1 miniature sheet and coincided with the Jubilee visit of The Duke and Duchess of Cambridge, Queen Elizabeth's grandson and his wife, to Malaysia. 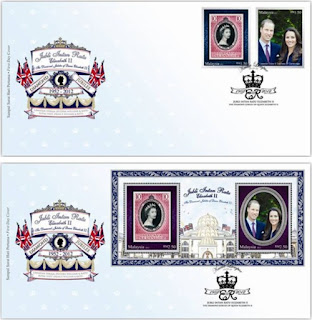 One of the stamps is of particular interest in that it features a stamp issued by the state of Selangor on 2 June 1953 to commemorate the coronation of Queen Elizabeth II. Similar issues were made by Johor (Johore), Kedah, Kelantan, Melaka (Malacca),  Negeri Sembilan (Negri Sembilan), Pahang, Pulau Pinang (Penang), Perak, Perlis, Terrengganu (Trengganu), Sabah (North Borneo) and Sarawak. I do not know why it was that the Selangor stamp was chosen to feature on the new issue rather than one from the other states. If anyone can tell me, I should be interested to know.

With the size of stamps seemingly increasing all the time (as well as the face value), Sri Lanka issued what are possibly the smallest Commonwealth stamps of 2012 on 10 March. They are two definitive stamps, values Rs50 and Rs 100, and feature the guard stone at Rathanaprasadaya. Meanwhile I have finally been able to obtain one of the last issues of The Solomon Islands before Stamperija moved in on  the production and issuing of their new stamps. The item is another one of those "personalisable" sheets that a large New York-based agency has been producing with the names of its client territories inscribed on them, such as St, Kitts,  Guyana and St. Vincent And The Grenadines. The sheet contains 29 stamps and the individual stamps are entirely design-less apart from the country name, value and a tiny national coat of arms. The release date of the production for The Solomon Islands was stated to be 1 April 2011. I depict below a complete sheet and a pair of the stamps:- 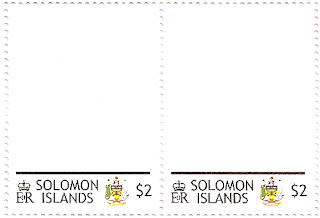