Having spent most of the year complaining about the excessively expensive new issues of Jersey, I am forced to admit that I like very much its final sets of the year. The Christmas stamps are released on 15 November 2012 and, rather unimaginatively, depict 8 scenes from Charles Dickens' "A Christmas Carol", but they are interesting and enjoyable designs and the 40p in particular is rather joyous with the altered Scrooge dancing in the streets on a snowy Christmas morning (though perhaps it does look a little like the scene from a film musical  rather than something straight out of Dickens). 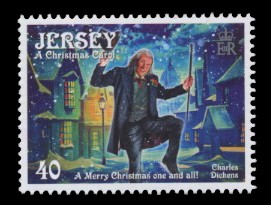 It does not really seem reasonable for Jersey to need to issue 8 different stamps for Christmas so that the price of a complete set is more than £5 although I suppose I can feel a little like the reconstructed Scrooge by making a donation to a cash-strapped post office, though I think there are better causes in need of a donation than Jersey Post.

The set is very spooky and depicts not just Marley's Ghost but the Ghost of Christmas Past:- 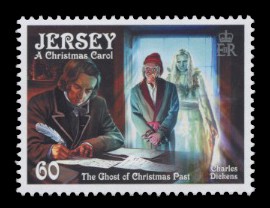 and the one that really frightened me when I was a child, the Ghost Of Christmas Future (what was under the hood?):- 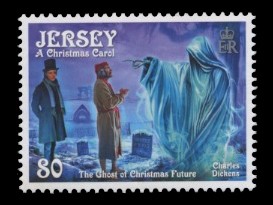 Another rather spooky set will be issued by Jersey on 2 November 2012 when the third set in their archaeology series will appear. The subject of the 5 stamps will be dolmens, prehistoric standing stones in Jersey, and, like the Christmas set, the stamps are not accompanied by a miniature sheet so costs are kept down a little at least. 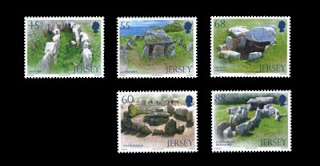 A set of 4 stamps and a miniature sheet was issued on 16 September 2012 to commemorate the gorilla, Jambo, who saved a child's life when it fell into Jambo's enclosure at Jersey Zoo. The gorilla is undoubtedly more worthy of philatelic commemoration than a good many humans who manage to find their way on to a stamp design nowadays. 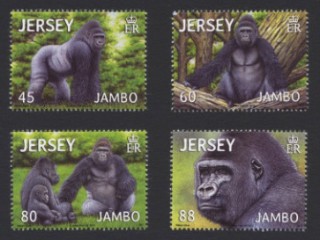 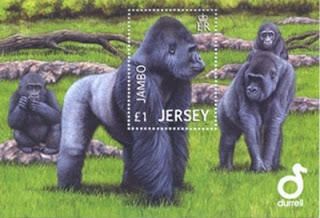 Brunei has continued to to issue extremely highly face valued miniature sheets, the latest to appear on the market is one with a $50 value which was issued in 2011 to commemorate the golden jubilee of Brunei's armed forces. What a relief that Royal mail has not taken notice of matching face value to anniversary, otherwise we may have had a £200 stamp to commemorate the Dickens bicentenary. Come to think of it, I had better check that Jersey has not done so given its record of producing extraordinarily highly face valued items for Queen Elizabeth's diamond jubilee. 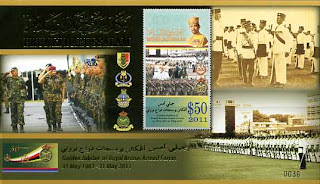 As Brunei is one of the richest countries in the world, surely its post office does not need to keep producing such items which are a great strain to collectors. Meanwhile, Ireland has issued a single stamp to commemorate the childrens' charity, Barnardos, and this is just what more stamp issues should be about - commemoration of  a worthy cause or person with a well-designed and meaningful stamp with a reasonable face value:-

Again, another very acceptable and reasonable issue from The Cayman Islands, has recently appeared, comprising 6 gummed and 2 self-adhesive stamps which commemorate the territory's emergency services:-