When Does A Stamp Have National Relevance?

In 1985, in the face of attack from numerous Walt Disney Stamps being produced by a large New York-based philatelic agency for between 10 and 20 different Commonwealth countries as well as the now notorious "Leaders Of The World" series, I decided it really was time to cut back on my new issue buying and resolved to buy only stamps which had a relevance in subject matter to the country whose name appeared on the stamps in question. It was not just the cost of the stamps that made me reach this decision but also the fact that lots of stamps featuring cartoon characters or foreign railways told me nothing about the interesting countries in whose name they were produced and that is one of the things I enjoy about stamp collecting - discovering something new about a far distant, or even a nearby, place. The result of all this was that I divorced myself from stamp catalogues - I was no longer obsessionally following what some catalogue editor was telling me I should include in my collection and I experienced a joyous feeling of liberation as a result. The modern stamp catalogues are ridiculous when they add hundreds, or even thousands, of new "stamps"per year which quite obviously have no relevance to whichever impoverished little territory they are supposed to be produced for and which will never see any reasonable amount of genuine postal usage in or from those countries. But one problem arises - how do we know which stamp designs are actually relevant to the country whose name appears on the stamps? Only today, I discovered an item for sale on the internet which, when it was issued some years ago, I immediately dismissed because the subject seemed to have no direct relevance to the country which was issuing it. However, by looking at the design in detail today, I find it to be surprisingly relevant to the issuing country and have reconsidered my opinion about it. The issue in question is the miniature sheet released by Ghana on 29 November 2004 which commemorated the 25th anniversary of the Pontificate of Pope John Paul II. To the best of my knowledge, Roman Catholicism is not the leading religion of Ghana and it is questionable that Ghana should issue such a commemorative. 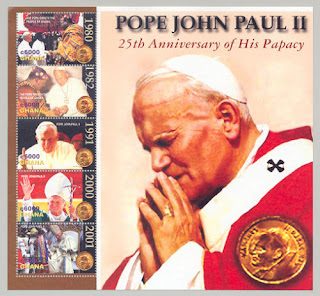 However, the designs interestingly highlight the Pope's visits to west Africa and one depicts him in Sierra Leone in 1980 and another illustrates the papal visit to Ghana itself in 1982. The stamp designs themselves therefore bring a note of local relevance to the issue and highlight an important occasion in Ghana's modern history and therefore satisfy me that it is worthwhile obtaining this interesting issue. The same pope features on another production by Stamperija which is a said to have been released by Mozambique on 30 June 2012 when a total of 60 stamps and 10 miniature sheets were added to this year's items issued in that country's name (complete total for the year so far is now being 298 stamps and 50 miniature sheets!). This latest emission is entitled "anniversaries" and 6 stamps and 1 miniature sheet have been produced for 10 different subjects (20th anniversary of the Catholic cathechism, centenary of the loss of The Titanic, birth centenary of Dean Arthur Anadon (an ornithologist), Russian composers, 150th anniversary of Achille-Claude Debussy, Charles Darwin (dinosaurs and meteorites), Alexander Pushkin, the Airbus A380, volcanologists and volcanoes, 150th anniversary of Wilbur Wright (aviator). Presumably, as a former Portuguese colony, Mozambique has a big Catholic heritage, so one may consider some relevance of the papal issue for the country but even if I were convinced that this issue had been made widely available at ordinary postal counters in Mozambique post offices I would not include it in my collection because of the plainly excessive numbers of stamps being produced in that country's name. 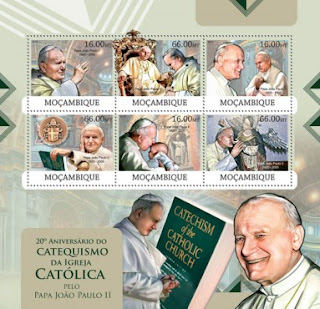 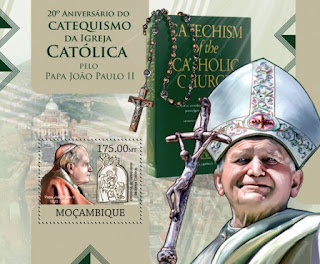 And even if the papal issue has some relevance to Mozambique, you would have a hard time convincing me that the Titanic centenary had anything to do with that country. I don't suppose that there are many icebergs floating off the coast of Mozambique! :- 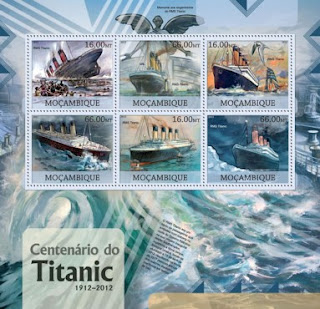