Pobjoy Mint Stamps have recently started their stamp website and very welcome it is too as it contains details of all current forthcoming stamp issues of its increasing number of client territories. It reveals just what an excellent agency it is compared with almost every philatelic agency around and shows just how excellent most of its stamp designs are, how most of them are relevant to the territory whose name is printed on the stamps and generally how reasonable the face values are. One wishes that a few more Commonwealth territories would choose to be represented by them.
The first of their territories to mention is Ascension which will issue a wonderful set of 4 stamps to commemorate the birth bicentenary of Charles Dickens and to provide a Christmas issue, depicting, as they do, original art of scenes from "A Christmas Carol". The subject may be rather cliched but the designs by Gyula Vasarhelyi (once a prolific designer but now his designs appear much less often on stamps) are novel and enjoyable. The stamps are lithographed by Cartor. 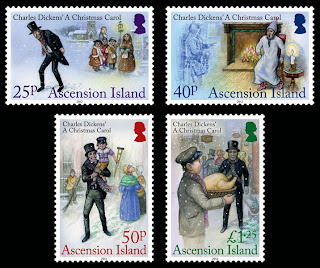 On 5 December 2012, Ascension will also issue a miniature sheet of 4 different stamps to commemorate the 70th anniversary of Wideawake Airport on the island which played an important role in the British campaign to liberate The Falkland Islands from occupation by Argentine military forces in 1982. This item is designed by Robin Carter and again lithographed by Cartor. 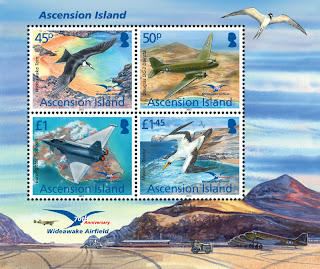 Bahamas. which Pobjoy Mint has taken over in the past year or so from CASCO, is planning to issue 6 attractive stamps on 1 November 2012 for use on Christmas mail. The designs by Andrew Robinson depict the Christmas story in the form of stained-glass window style illustrations. These are lithographed by BDT International. This set follows on from the previously illustrated set of 6 stamps which was issued on 10 October 2012 to commemorate the 50th anniversary of women's suffrage in Bahamas and which had the same designer and printer. 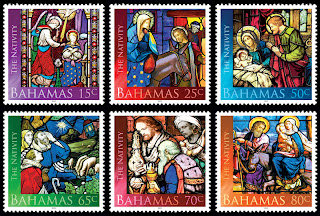 The Falkland Islands Post Office has used Pobjoy Mint for some years now and its next issue on  19 November 2012 will be a set of 12 stamps to provide a new definitive series. The set is designed by Tony Chater and depicts whales and dolphins, presumably of local waters. The set is lithographed by BDT International.

The two most recent territories to give up on CASCO and move to Pobjoy Mint are British Virgin Islands (of which there is no news yet of stamp issues to be released although I presume the territory will want a Diamond Jubilee set to be produced in good time) and Tristan Da Cunha. The latter will issue an excellent set of 4 stamps on 28 November 2012 which is designed by Andrew Robinson and lithographed by BDT International to commemorate the 90th anniversary of the Shackleton-Rowett expedition. Sir Ernest Shackleton's expedition to the south polar region was funded by the trader, John Rowett, hence the name of the expedition, and the expedition ship, The Quest, arrived at South Georgia on 4 January 1922. In the early hours of 5 January, Shackleton experienced chest pains and in reply to the expedition physician telling him to take things more easily Shackleton said, "You're always wanting me to give something up. What do you want me to give up now?". These were his last words as he subsequently collapsed and died from a heart attack. He was then aged 48. Lady Shackleton, his widow, requested that his body be buried at South Georgia and he was interred in the old whalers' graveyard at Grytviken. Frank Wild then took command of the expedition and after sailing through the Weddell Sea returned to South Georgia where a cairn was erected to Shackleton's memory.  Thence, they sailed to Tristan da Cunha, where the expedition members met with the islanders and took depth soundings and then travelled on to South Africa where they were entertained by Jan Smuts, the prime minister. On the return to Britain the expedition visited St. Helena, Ascension Island and St. Vincent before arriving at Plymouth on 16 September 1922. This is an issue, therefore, which has notable relevance to Tristan Da Cunha. 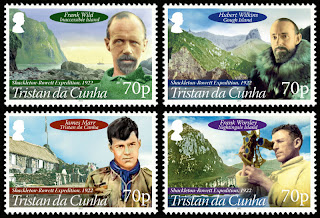 Meanwhile, South Georgia And The South Sandwich Islands is due to issue 2 sets of stamps. An issue of 6 stamps noting the Marine Protected Area will be released on 9 November 2012:- 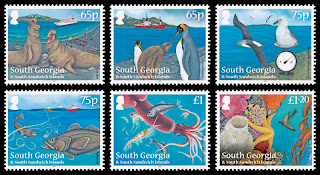 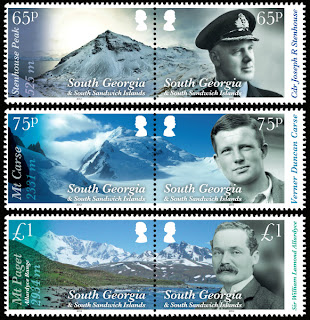 Papua New Guinea continues to issue extremely interesting stamps with local themes although the New York-based philatelic agency which handles PNG issues unfortunately seems to be allowed to release additional sets with little or no local relevance to the country and this goes a long way to ruining PNG's philatelic reputation. I have said before that I do not bother with these additional irrelevant issues but enjoy obtaining the local designs (though they are rather more expensive than they ought to be). The latest release of 4 stamps and 2 miniature sheets on 5 September 2012 is on the theme of traditional cloths of Papua New Guinea and they show interesting illustrations:- 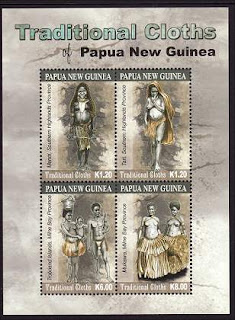 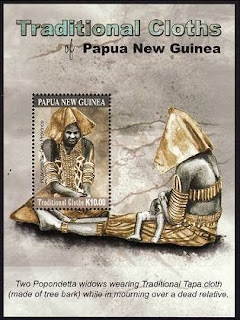