No. 172. France To Join The Commonwealth? 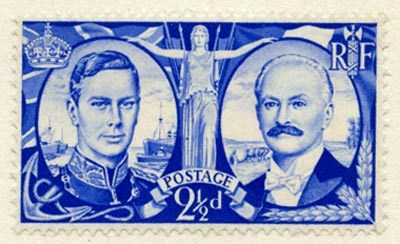 One of my all-time favourite Commonwealth philatelic items is the above final essay to be found in the British Postal Museum collection and reproduced as a PHQ-style postcard some years ago by the Postal Museum. It depicts a proposed stamp that was to have been issued at a time when an extraordinary event may have occured - nothing less than the union of Great Britain with France. With the conflict with Hitler's Germany underway in December 1939, Jean Monnet of the French Economic Mission in London hoped for a United States of Europe after the end of the war and as a prelude to that, held talks with Neville Chamberlain, the British prime minister, and other senior British figures of the time about his idea. By June 1940, the government of Paul Reynard in France was close to defeat at the hands of the Germans and on 15 June the French cabinet voted to seek the terms of an armistice from Germany although in the previous March, they and the British government had agreed that neither would seek a separate peace. the British opposed a French surrender particularly as the Germans might take hold of the French navy as a result.  Wishing to keep Reynard in power in France as he supported the French continuation of the war, British officials joined with Monnet in producing a draft proposal for a "Franco-British Union" hoping that this would give power to Reynard which would help him to persuade his colleagues to continue the war from north Africa. On 16 June 1940 Charles De Gaulle, who supported Reynaud, travelled to London and convinced Winston Churchill, the new British prime minister, that a dramatic gesture was needed to support Reynaud and he was able to phone Paris to say that Churchill proposed a union between the 2 countries which Reynaud accepted. A document was produced which proclaimed that there should be a joint citizenship, a joint currency, joint war cabinet and military command and joint foreign trade. The British War Cabinet approved a "Declaration Of Union" which said that "France and Great Britain shall no longer be two nations but one Franco-British Union. The constitution of the Union will provide for joint organs of defence, foreign, financial and economic policies. Every citizen of France will enjoy immediately citizenship of Great Britain, every British subject will become a citizen of France".  Reynaud, De Gaulle and Churchill arranged a joint meeting of the 2 governments for the following day in Concarneau but the rest of the French cabinet was not convinced, believing the Union to be a British attempt to gain control of French colonies and that it was better to "be a Nazi province than a British dominion". Petain, an opponent of Reynaud said that the Union would be "fusion with a corpse" and although the French president, Albert Lebrun, supported Reynaud, the prime minister resigned that evening, Petain formed a new government which immediately asked the Germans for armistice terms and the British cancelled their plans to travel to Concarneau. If the French cabinet had supported Reynaud in agreeing to union with Britain, then Europe would be very different now and The Commonwealth would not only have The Franco-British Union as a member but also the many former French colonies which are now independent and therefore more stamps for the Commonwealth collector to include in their collection. The first stamp issue of the Union would have been the item depicted above. In fact the idea for a joint Anglo-French stamp issue to emphasise the 2 nations' war-time co-operation dated from the early days of the war. The French Minister of Posts and the British Postmaster-General began correspondence on the production of such an issue in January 1940 and by mid-February, King George VI had given his approval. The French Post Office commissioned Henri Cheffer to design a joint stamp while the British Post Office chose Edmund Dulac, the great French-born designer, to work on the design. The postal administrations chose the work of Cheffer:- 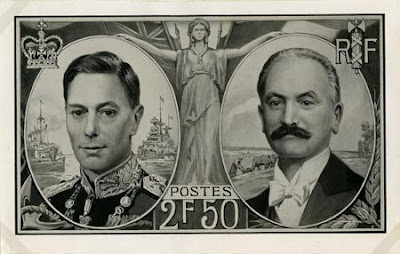 but Dulac altered the design to make it suitable for photogravure printing which was used by Harrison and Sons Ltd. for British stamps whilst the French generally used letterpress or intaglio. The design featured King George VI and President Lebrun and was ready in its final form by May 1940 with the intention to release it on 2 September 1940. With Petain's request for an armistice on 17 June, all work on the production of the stamp came to an end. The rest is history.
But with the Suez Crisis in 1956 and joint British and French action against the Egyptian regime of Gamel Abdul Nasser, a second opportunity for Anglo-French union occurred. The French prime minister, Guy Mollet, met the British leader, Anthony Eden, in London on 10 September 1956 where he proposed that, in the face of the crisis, a union between The United Kingdom and France be established. Eden turned down the suggestion but when Eden later visited Paris, Guy Mollet requested that France be allowed to join what was then The British Commonwealth. A document of 28 September 1956 indicated that Eden responded in an enthusiastic way to the request especially as Mollet appeared to have no objection to recognising Queen Elizabeth II as Head of The Commonwealth and was prepared to accept common citizenship along the lines of the Irish model. However, the proposals came to nothing, the allies were forced to withdraw from Egypt and in the following year, France joined five other European nations in founding the European Economic Community. Unlike the 1940 events, there were no philatelic consequences of the proposed French Commonwealth membership in 1956.
Although political union between Britain and France never occured, geographical union did take place with the opening of the joint Franco-British built Channel Tunnel in 1994. There was finally a joint Franco-British stamp issue to celebrate the event with each country releasing 4 stamps each in two common designs, one design by the British designer, George Hardie, and one by the Frenchman, Jean-Paul Cousin. The British set was issued on 3 May 1994 and printed in photogravure by Harrison and Sons Ltd., just as the issue of 1940 would have been if it had ever been released.

A further British stamp to note the Channel Tunnel was issued in a miniature sheet of 4 different stamps which was released on 2 February 2012 which was part of the final set of stamps which depicted British monarchs. 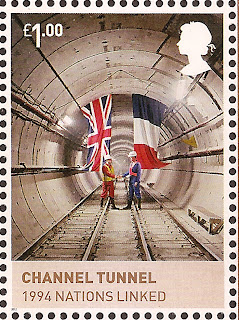 Although the question in the title of this blog is now rather silly, things were very different in 1940 and 1956 which may have resulted in we Commonwealth stamp collectors now having French stamps also in our collection.