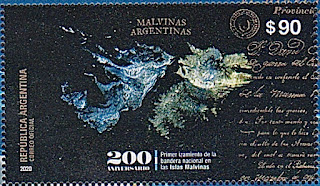 🇫🇰 I thought it would be interesting to start with a recent issue from a non-Commonwealth postal service for a change.The postal service of Argentina has issued recently a miniature sheet containing a single stamp depicting a map of the Falkland Islands to commemorate the 200th anniversary of the “first raising of the Argentine national flag in the Islas Malvinas”.

Up until 1764 the islands had been visited by explorers of various European nationalities and the French then established a colony at Port St Louis and and named the islands the Îles Malouines after the port of St Malo in Brittany. In 1764, the English Captain John Bryant, unaware of the French presence at Port St Louis in East Falkland, landed at West Falkland, discovered a natural harbour which he called Port Edmonton and claimed the islands in the name of Great Britain. In 1766 Captain James MacBride established a permanent British base at Port Egmont..

By a pact of 1766 the French agreed with the Spanish to leave the Malouines and handed Port St Louis over to the Spanish which they renamed Puerto Soledad in 1767. On 10 June 1770 the Spanish with 1400 troops in 5 ships forced the British to leave Prince Egmont hence precipitating the Falklands Crisis which came close to being an Anglo-Spanish war but in January 1771 Captain John Stott reestablished the British in Port Egmont when he arrived in HMS Juno, HMS Hound and the mail ship HMS Florida. Port Egmont subsequently became an important port-of-call for British ships rounding the Cape of Good Hope.

Because of the pressures of the American revolution, British forces were withdrawn for redeployment from Port Egmont on 20 May 1776 but the Royal Navy officer, Lt Clayton left a plaque asserting British sovereignty over the Falklands. British sealers continued to use Port Egmont in the following 4 years but the Spanish destroyed the colony in 1780. The Spanish administered the colony at Puerto Soledad from Montevideo (in modern-day Uruguay) until they were forced to withdraw because of the pressures of the Peninsula War. The islands again became shelters for visiting whalers and sealers.

The United Provinces/Argentine flag did not fly over the Falkland Islands again until 1982 when on 2 April Argentine forces landed on the islands and occupied the territory. The Argentine postal service reissued a previous stamp depicting a rosette of the national colours bearing the overprint Las Malvinas Son Argentinas in four lines 1982. A British task force set sail to liberate the islands and the Argentine commander in the Falklands surrendered on 14 June 1982 after the fall of the capital, Port Stanley. The flying of the Argentine flag over the islands on this second occasion was limited to a period of just over 2 months.

The restored Falkland Islands postal service subsequently issued a £1 + £1 (restoration fund) stamp on 13 September 1982 (see Blog of 14 June 2012) which depicted a map of the Falkland Islands. This stamp is very similar to that placed inside the latest Argentinian miniature sheet (see below).

A short-term definitive set was also issued by the Falkland Islands Post Office in 1983 and the 1p value depicted the raising of the Union Jack in 1833 on the 150th anniversary of the reestablishment of British administration in the territory and of the actual flag raising and assertion of sovereignty. 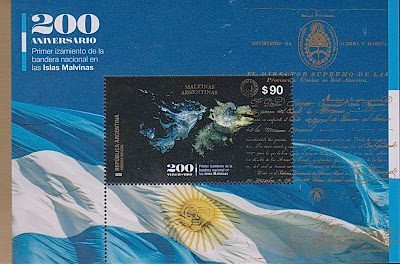 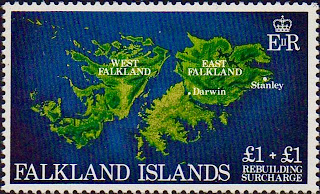 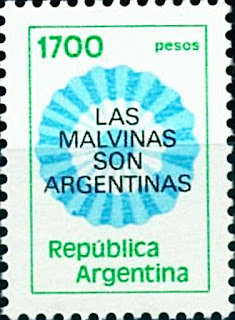 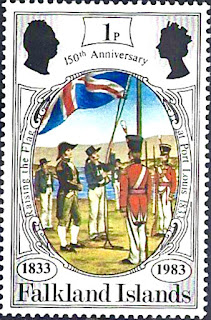 Interestingly the Argentine postal service has also issued recently another miniature sheet which commemorates General Manuel Belgrano (1770-1820) who unsuccessfully attempted to resist the British invasion of Rio de la Plata in 1806 when his troops fled at the single firing of a British cannon, escaping himself to Montevideo in Banda Oriental (modern-day Uruguay). The British as a result captured parts of Buenos Aires temporarily (the events are detailed in Blog 281). Ironically, during the Falklands War, the first vessel to be sunk on either side was the Argentine ship General Belgrano. 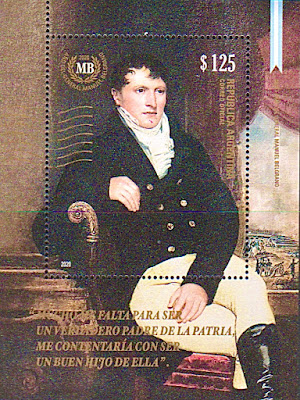 These issues illustrate very nicely that postage stamps can be used, and frequently are, to serve not just as receipts for the pre-postage of mail items and as additional income for postal services through philatelic sales, but also importantly as a means of laying claims to territory and asserting sovereignty over territories as well as trying to achieve other political and diplomatic goals by broadcasting them on postage stamps. Some nations very ably use philatelic methods to assert their positions and status in the world while others are content to allow privatised postal services or foreign philatelic agencies to fully ignore this useful philatelic diplomatic tool in the sole pursuit of making money from postage stamps.

🇯🇪 For no obvious good reason Jersey Post will issue a set of 6 stamps on 17 February 2021 on the subject of Historic maps of Jersey. One of the stamps, the 70p value, will represent this year’s Jersey Post contribution to the annual SEPAC omnibus series. Rating:- **. 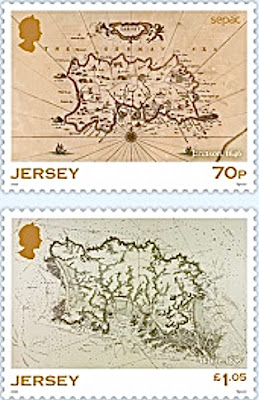 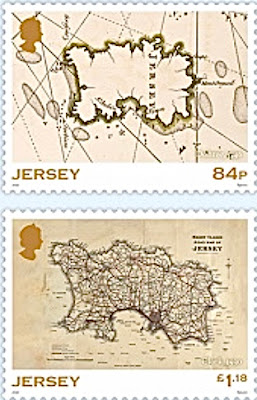 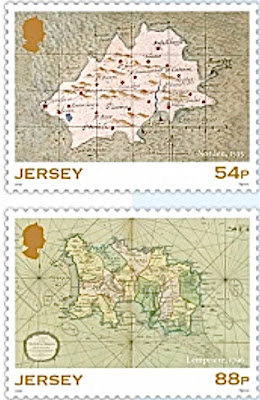 🇰🇾 Depicted below are better illustrations than shown before here of the 3 self-adhesive stamps, each issued in a separate booklet of 10, from the recently issued new definitive series released by the postal service of Cayman Islands. See Blog 1799. 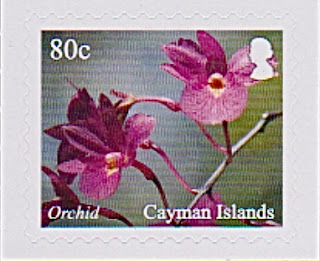 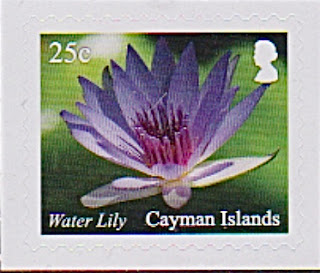 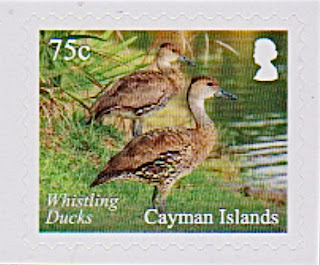 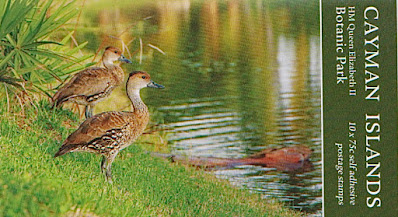