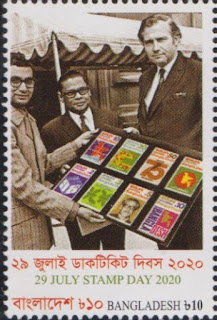 🇧🇩 The postal service of Bangladesh has released some more new issues and an older issue has emerged about which I was previously unaware.

The surprise single stamp was released on 29 July 2020 to commemorate Stamp Day. The stamp depicts the first stamps of Bangladesh and, of immense interest, is the photograph depicted on the item. The stamp commemorates the design of the pathfinder stamps by Biman Mallick who is featured on the stamp showing his designs to the notorious John Stonehouse, the former British Minister of Posts and Telecommunications. Stonehouse was a Labour Member of Parliament who became Postmaster General in 1967 having first worked under Tony Benn, the Postmaster General who revolutionised  the Post Office’s approach to stamp issuing in the mid-1960s. Unknown at the time was the fact that Stonehouse had been working as a spy for communist Czechoslovakia since 1962 but more immediately he was involved in a number of fraudulent business dealings. The role of Postmaster General was abolished by the Post Office Act of 1969 but Stonehouse continued in the renamed but slightly less grand-sounding role of Minister of Posts and Telecommunications. The Labour government was defeated by the Conservatives in the 1970 general election and Stonehouse returned to being an ordinary MP but presumably managed to get in on the publicity given to the design in Britain of the Bangladesh first stamps because of his former role as politicians are wont to do.

By 1974 Stonehouse’s frauds were close to being exposed so he decided to fake his own death and while on a visit to Miami he went sea swimming and disappeared leaving a pile of clothes on the beach. He was presumed drowned or, as this was the era of the movie Jaws, thought to have possibly been killed by a shark and his body lost at sea. He assumed a new identity and began a new life in Australia with his mistress, Sheila Buckley. He transferred large sums of money to bank accounts in Australia using false identities but a bank clerk noticed some irregularities and informed the police who put Stonehouse under surveillance. Initially the Australian police suspected that Stonehouse was the infamous Lord Lucan who had disappeared from London after murdering his children’s nanny but it was noticed that he was reading articles in British newspapers about the disappearance of John Stonehouse and his true identity was realised. He was arrested and returned to Britain and put on trial in 1976 and in 1977 he was found guilty and was sentenced to 7 years imprisonment for fraud. He was released in 1980 and subsequently made appearances on various television programmes and died from a heart attack in 1988.

This then is a fascinating stamp and is described as “extremely rare”. I am not sure if this is because it was withdrawn from sale because the Bangladesh authorities recognised the inappropriateness of depicting a criminal like Stonehouse on one of the nation’s stamps. I would think that when the stamp was first designed the significance of the person on the right side of the stamp was not realised. Rating:- *****. 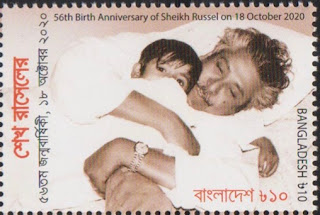 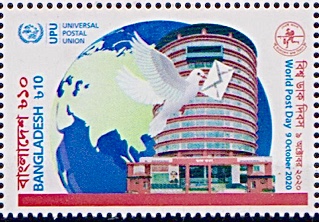 ?9 November 2020 - Special session of the Bangladesh Parliament to commemorate the Birth Centenary of Sheikh Mujibur Rahman, Bangabandhu (Father of the Nation) - 3 stamps and 1 miniature sheet containing all 3 stamps. Rating:- ***. 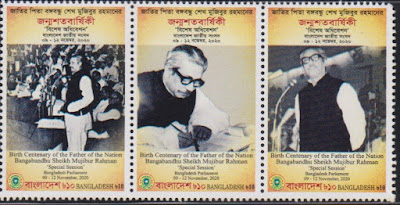 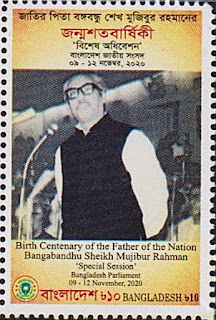 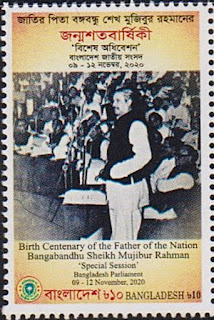 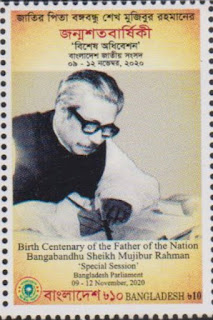 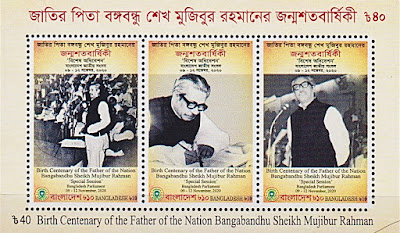 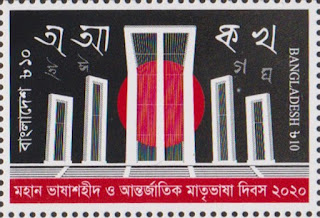