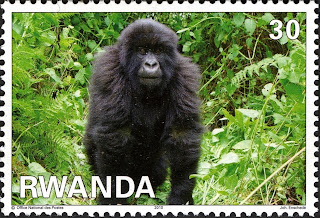 🇷🇼 15 November 2020 marks a very special philatelic anniversary - it is the 10th anniversary of the most recent stamp issue of the postal service of Rwanda. On 15 November 2010 a set of 4 stamps depicting gorillas was released which was only Rwanda’s third stamp issue of the 21st century and its second since joining The Commonwealth on 29 November 2009 (a set of 4 stamps was issued on 1 January 2003 noting the country’s anti-AIDS campaign and a set of 5 on 15 October 2010 depicting local dance). It took until the July 2017 edition of Gibbons Stamp Monthly Catalogue Supplement for the Gibbons Catalogue to include the two 2010 issues in its listing and they did not feature in the ‘Part1’ (Commonwealth) section but in that part dedicated to the ‘Rest of the World’. The Rwandan postal service did not commemorate philatelically the 50th anniversary of its Independence from Belgium in 1962 which is commemorated by Independence Day On 1 July. 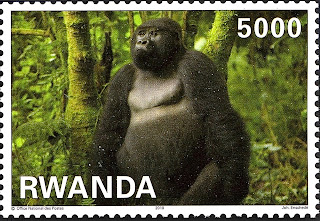 🇬🇮 Whilst we are on the subject of primates, Royal Gibraltar Post Office will issue a set of 4 stamps on 20 November 2020 on the subject of the Barbary Macaques of Gibraltar. There does not seem to be any particular reason for this set to be released at this particular moment and the designs are about as simple as they could be - the portraits of the monkeys are digitally cut-out black and white pictures on a wholly uninteresting background. For this issue the collector will have the pleasure of paying £6.20p. At least there is no accompanying miniature sheet.The set was designed by Stephen Perera and  lithographed by Cartor. Rating:- *.

🇲🇲 The postal service of Myanmar was planning to issue a single stamp around the 20 to 24 October 2020 to commemorate the 75th anniversary of the United Nations Organisation but the issue does not seem to have appeared possibly due to the fact that the UN was preparing and has now passed a resolution on the human rights situation in Myanmar whereby the General Assembly expressed grave concern about continuing reports of serious human rights violations as well as of violations of international humanitarian law in Myanmar against Rohingya Muslims and other minorities, including arbitrary arrests, deaths in detention, torture and other cruel, inhuman or degrading treatment or punishment. 140 nations voted for the resolution while it was opposed by only 9 (Russia, China, Vietnam, Myanmar, Zimbabwe, Laos, Cambodia, Belarus and Philippines). It’s not surprising therefore that Myanmar did not feel like commemorating the UN’s notable birthday and has apparently pulled the issue. 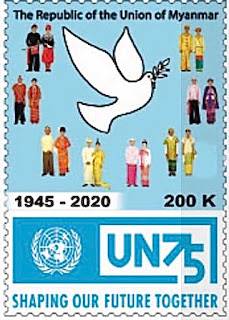 🇬🇬 Guernsey Post will issue its strip of 6 Post and Go Local fishing boats stamps on 1 December 2020 with an additional inscription, “Wishing you a/safe Christmas”. The stamps will be sold until 24 December and dispensed from kiosk GG02 situated in Envoy House in St Peter Port. The additional message is unusual replacing the usual ‘Merry’ or ‘Happy’ with a message which is clearly relevant to this first COVID-19 Christmas and as such makes this issue rather more interesting than it otherwise would be. Rating:- ***.

🇲🇾 Pos Malaysia issued a Setem Ku sheet of 10 different (Personalised) stamps to commemorate the festival of Deepavali. The sheet is sold in a folder which also includes 3 postcards and 3 envelopes. 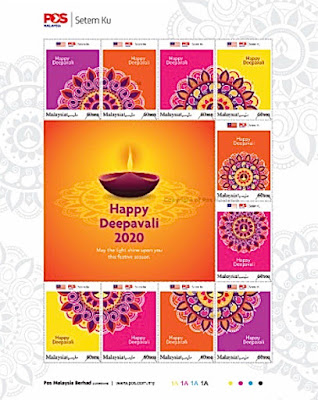