🇨🇦 it is reported that Canada Post has announced belatedly that it issued a single $5 stamp on 11 June 2018 to commemorate the G7 Meeting of important world leaders in Quebec City. The design was chosen especially to demonstrate the unity of the seven countries in their response to world problems. Rating:- *****. 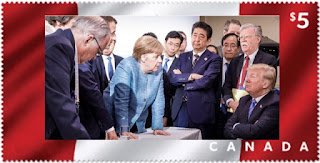 🇬🇬 A 'tweet' from Guernsey Stamps on 10 June 2018 (a Sunday) announced that Post and Go machine GG03 situated in the Guernsey Information Centre was dispensing that day the Flowers Post and Go stamps with an additional inscription to welcome passengers from the cruise ships Azamara Journey and Magellan into port.

🇵🇰 Meanwhile  Pakistan Post actually issued a single stamp on 9 June 2018 to commemorate Pakistan's participation in the SCO (Shangai Cooperation Organisation) summit meeting held on the 9 and 10 June 2018 in Qingdao in China. The SCO is a pan-Asian political, economic and security organisation which has China, Russia, Uzbekistan, Kazakhstan, Tajikistan, Pakistan, India and Kyrgyzstan as its full members. The stamp design is not terribly interesting but this is a notable issue drawing attention to this important organisation particularly as the western allies seem to be falling out with each other.