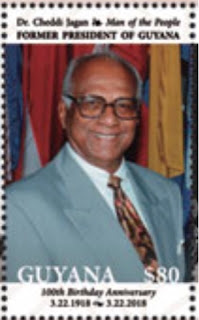 🇬🇾 Who knows how the telling of history will be distorted over the next 500 years. Who can tell how many fine points about historical events will be lost. 2018 will be as remote to historians in a half millenium's time as 1518 is to us. Actually 1518 may be more familiar to us due to the keeping of paper records than 2018 will be in 2518 as the keeping of digital records seems altogether much more precarious than the methods tried and tested by the passage of time.
A wise historian in 2518 may well decide to see if she can track down the unlikely continuing existence of a stamp collection for the wise historian might well appreciate the amount of contemporary 21st and 20th century information that could be contained in such a collection. She might discover the names of territories of which she was previously unaware, of events previously unknown and of political leaders and rulers long forgotten. Of course, she would need to be discerning about the information she extracts from these miniature records since they may well have been interfered with by a person of power, whether contemporary or in the future.
In Blog 1183 I mentioned that the Guyana Post Office Corporation intended to issue a miniature sheet containing 4 different stamps to commemorate the Centenary of the birth of Dr Cheddi Jagan who first became Chief Minister of British Guiana in 1953 and was then prime minister of the colony from 1961 to 1964.
Jagan founded the People's Progressive Party in 1950 with Forbes Burnham, After Jagan's election victory in 1953 the British staged a military intervention because the British prime minister, Winston Churchill, feared that Jagan was a Marxist-Leninist and that he would give the Soviet Union a foothold in Central America. Britain suspended the constitution and installed an interim government and restricted Jagan's movements but when the PPP won a general election in British Guiana in August 1961 Jagan returned to the role of Chief Minister for the following 3 years. By the 1964 elections, Forbes Burnham had established a separate party, the People's National Congress, and the PNC together with another party won a majority of seats in the new parliament and were invited to form a government. Jagan, however, refused to resign and had to be removed by the colony's Governor. 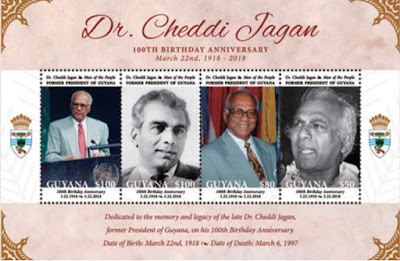 Jagan was leader of the opposition for 28 years until the PPP won the elections of October 1992. By then Guyana had achieved independence and become a republic with an executive president and so Jagan became President of Guyana. He held the post until he died on 6 March 1997 having had heart surgery following a heart attack.
Following his death the Cheddi Jagan Research Centre was established in Georgetown to commemorate his life and work and it was with this organisation that the Guyana Post Office Corporation collaborated to produce the illustrated miniature sheet containing 4 stamps. The plan was to release the issue on 22 March 2018 both locally and through the philatelic agents, IGPC, which are based in Beijing and New York.
On the proposed date of issue the Cheddi Jagan Research Centre announced that it had had plans to release 400 first day covers of the miniature sheet and had made a deposit with the Guyana Post Office of $200000 (Guyana dollars). It had planned to launch the issue at an event scheduled for 20 March but the Guyana Post Office had not provided the items and had advised the Research Centre to contact the office of the President of Guyana about the matter. It appeared that the issue of these stamps had fallen victim to political interference from the office of President David Granger who had come to power in 2015 as leader of a coalition of APNU (A Partnership for National Unity) and Alliance For Change after defeating the PPP. Indeed President Granger is quoted as saying that the issue of the stamps "...was not a postal function...", whatever that may mean.
It looked highly likely that this miniature sheet would have the status of having been unissued to local post offices and the Guyana Post Office Facebook site makes no mention of the sheet's release. It is featured on the IGPC website but if ordered via the site it is not available. It has been sold earlier to some dealers and I have been able to obtain one of the sheets from one such dealer. In the last couple of days it has been announced that the President's office will allow the stamps to be issued eventually but whether or not that is the case remains to be seen but for now it might be worth looking out for this interesting and historically significant philatelic item.
I wonder if our future historian will come across this item and be puzzled about what happened in the run-up to the release of the sheet and wonder just who was Dr. Cheddi Jagan, 'Man of the People', as the stamp labels him. Of course that would be no problem at all for her in comparison with trying to work out who the 10 characters featured on the Royal Mail 'Game Of Thrones' stamps were and which territories they ruled over! 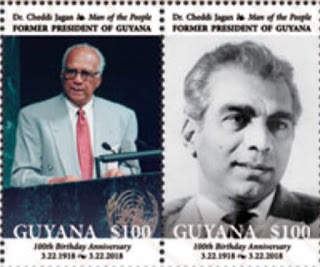