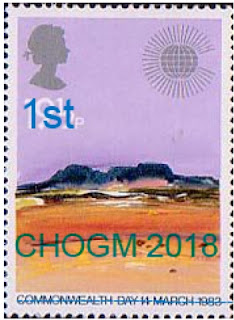 🇬🇧 In a special announcement on 1 April over the Easter holiday, Royal Mail has revealed that, having previously chosen not to commemorate the event, a stamp will indeed be released to commemorate the hosting by the United Kingdom of the Commonwealth Heads Of Government Meeting (CHOGM) in London and Windsor from 16 to 20 April 2018 which will be attended by senior representatives of the 53 Commonwealth nations.
This change of heart is likely to have occurred as the result of governmental pressure to commemorate this notable event and has resulted in a stamp which will be most unusual for modern day stamps from Royal Mail - an old commemorative, the 19 and a half pence value from the 1983 Commonwealth Day issue, with a '1st' surcharge and new inscriptions applied so that the 'Commonwealth Day 14 March 1983' wording is cancelled by a blue line and the inscription 'CHOGM 2018' is added in green.
It is also unusual in these modern times for Royal Mail to release a single 1st Class stamp as it is unlikely to be cost effective but maybe it is the cheapest way to commemorate this event and meet the government's requests and also use up a convenient old stock of these stamps The date of issue will be Tuesday 17 April, the day after the meeting begins. An interesting item which commemorates a notable event, Rating:- ****.
Posted by White Knight at 23:38