1213. 🇬🇧 Royal Mail Commemorates CHOGM After All - With A Postmark.

🇬🇧 Royal Mail failed to release any stamps to commemorate the holding of the Commonwealth Heads Of Government Meeting which was held in London and Windsor from 16 to 20 April 2018 and which was attended by 53 heads of government or other senior ministers. However the event was commemorated philatelically by a slogan postmark. I received an item of mail today with a 2nd Class stamp fixed to it cancelled by the postmark which reads:- 'COMMONWEAL TH HEADS OF GOVERNMENT MEETING London 2018 16 - 20 April'. The item of mail is dated 16/04/2018 at Nottingham Mail Centre. So there we have it - a philatelic commemoration of CHOGM at no cost at all to the stamp collector.

🇯🇪 Jersey Post will issue a strip of Post and Go stamps on 19 May 2018 to commemorate the Wedding of Prince Henry Of Wales and Meghan Markel. The issue takes the form of an appropriate additional inscription applied to the Jersey Crest stamps. The inscription says Prince Harry & Meghan Royal Wedding 19/5/2018. Rating:- 0.

🇬🇬 In Blog 1203 I mentioned Guernsey Post's intention to release a strip of Post and Go 'Guernsey Flag' stamps with appropriate surcharge applied to mark its philatelic bureau's attendance at the Essen International Stamp Fair 2018 from 3 to 5 May 2018. I now provide an illustration of one of the stamps from this strip:-

🇨🇾 Cyprus Post will issue its Europa Stamps on the subject of Bridges on 2 May 2018. The issue is made up of 2 stamps and 1 booklet containing 8 stamps (4 x 2 different stamps issued tête bêche). I like the donkey standing on the bridge in the 64c value. Rating:- ****. 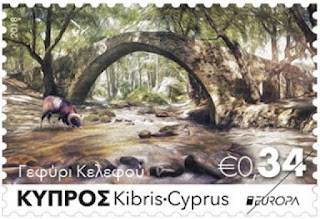 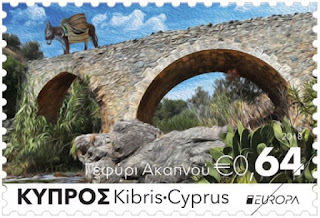 🇲🇹 MaltaPost will issue 2 stamps and 1 booklet on 3 May 2018 as its contribution to this year's Europa omnibus which is on the subject of Bridges. The issue was designed by David P Attard and lithographed by Printex and perforated 14. Rating:- ****. 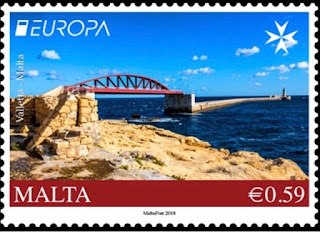 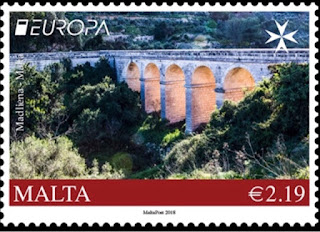 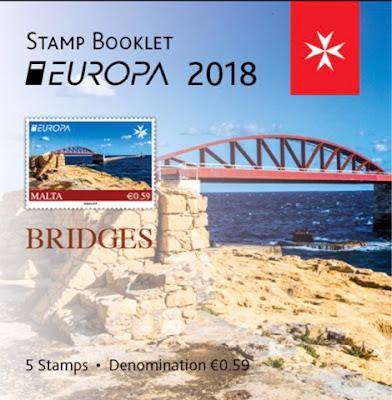