The Isle Of Man Post Office is to issue what it calls its "first ever Variable Valuable Definitives Collection" at Spring Stampex 2017. Four designs are illustrated and they are made up of various versions of the Manx Trinacria at one side of the stamp with a blank space to the other side and look very much like Post and Go stamps.
The depictions here are rather indistinct because they are taken from tiny illustrations but clearly, given the title of the stamps (though I would have thought that "Variable value definitives" was what the Manx Post Office really meant to call them), the stamps look exactly like Post and Go labels with the value being added when the stamps are dispensed from the kiosk.  They're certainly attractive and interesting items and presumably the date of issue will be 15 February 2017 - hopefully they will not just be dispensed from a travelling kiosk sited at various exhibitions outside of the Isle Of Man but also from at least one actually situated on the Isle Of Man itself.

The Manx Post Office also intends to release a set of "Civic Pride" stamps in early 2017 along with a Europa set depicting castles. A set will be released to commemorate the 110th anniversary of the TT Races and will depict "Great British motorcycles". Later in 2017 sets involving themes which include "nature", "military" and "royalty" will be released - I suppose the "royalty" issue will be released to commemorate the Platinum wedding anniversary of The Queen and The Duke Of Edinburgh and will appear in November around the time of the actual anniversary.
Guernsey Post has announced that its set to commemorate the royal platinum wedding will be issued on 10 November 2017 (perhaps it will be a single high value stamp or a miniature sheet). Guernsey Post will also issue its 4th set to commemorate the Centenary of the First World War on the same date, having issued 2 more sets 2 days previously on 8 November as Christmas stamps for Guernsey and Alderney.
Guernsey Post's first Post and Go labels of the year will be issued on 15 February 2017 and will feature Lighthouses of the Bailiwick along with overprints, one presumes on the "Guernsey Flag" labels, to note Spring Stampex 2017.

Malta Post issued a commemorative cover on 15 September 2016 to celebrate the 50th anniversary of the establishment of diplomatic relations between Malta and The Sovereign Military Order Of Malta (SMOM). The cover bore a "Map of Malta" greetings stamp with an attached label which depicts the flag of the SMOM. This stamp and label combination seems to only be available on the commemorative cover and not in an unused state.
It's an interesting item though since the flag depicted was that used on Malta itself until 1798 when the island was under under the oppressive rule of The Order of the Knights of St. John which had controlled Malta since 1530. The flag was hauled down when Napoleon Bonaparte, much to the joy of the local inhabitants, invaded Malta and overthrew the Knights of St. John and then went on to occupy the island and expel the Knights from the island.
The French, however,  soon became as unpopular with the Maltese as the Knights had been and there was general rejoicing on Malta when the British seized the island in September 1800 after expelling Bonaparte's forces from there.  The Maltese subsequently petitioned the British to prevent the Knights of St. John from returning to Malta. Bonaparte in the meantime had sailed on to invade Egypt and then returned to France to overthrow The Directory on 10 to 11 November 1799 and established The Consulate which he dominated leading to him becoming the sole ruler of France. 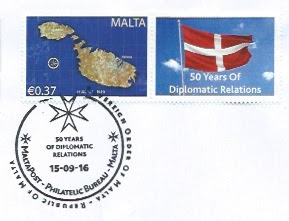 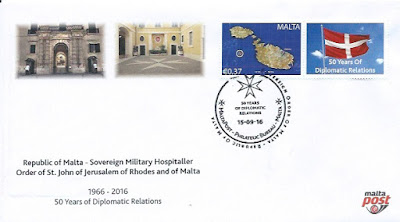 Pos Malaysia issued 3 stamps on 9 December 2016 to commemorate the Centenary of the Girl Guides Association of Malaysia. The attractive issue was designed by Nur Farhana Bakerrudin. Rating:- ***. 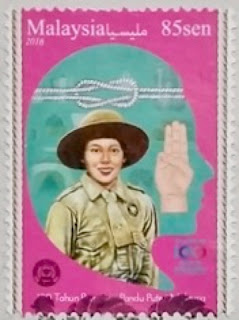 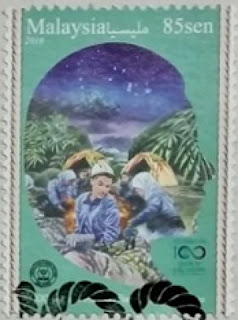 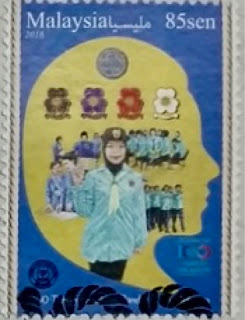