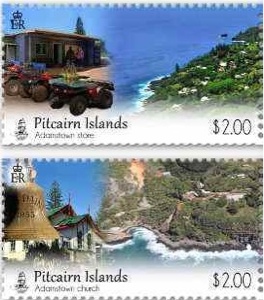 Bounty Post, the postal service of Pitcairn Islands, will issue a set of 4 stamps on 24 August 2016 on the subject of Adamstown, the settlement on Pitcairn. The interesting and colourful set depicts scenes of the settlement which are depicted on 2 x $2 se-tenant pairs which were designed by Denise Durkin and lithographed by Southern Colour Print and perforated 14.5 x 14. Rating:- *****. 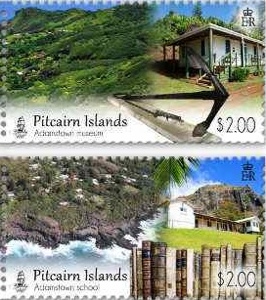 Natalie Rooney of New Zealand won the country's first medal at the 2016 Olympic Games when she achieved the silver place in the women's trap shooting event on 7 August and therefore becomes the first competitor who will feature on one of New Zealand Post's medallist miniature sheets mentioned in Blog 797.
Australia Post, meanwhile already has 3 sheetlets of gold medallist stamps to issue - one each for Mack Horton in the men's swimming 400m freestyle event, the women's 4 x 100m freestyle relay team (Bronte Campbell, Cate Campbell, Brittany Elmslie, Emma McKeon and Madison Wilson) and Catherine Skinner for the women's trap shooting competition.
Pos Malaysia will reissue the Sabah train miniature sheet with an additional inscription on 10 August 2016 to mark its participation in Thailand 2016 32nd International Philatelic Exhibition to be held in Bangkok from 10 to 15 August 2016.
The excellent website, Joint Stamp Issues, has pointed out something which I had not previously noticed - that the notorious philatelic agency, Stamperija, has apparently had its first shot at an omnibus series, or at the very least, a minibus issue. Towards the end of 2015, it released a number of philatelic products in the form of 3 "sheetlets" which were said to commemorate the 70th anniversary of The United Nations.
Two Commonwealth members had their names inscribed on these products - Mozambique and Solomon Islands - whilst the third was inscribed with the name of a French-speaking African country - Niger. The "sheetlets" each contained 4 "stamps" - 3 of them were repeated in all 3 "sheetlets" and therefore giving us what may pass as an omnibus issue whilst the fourth "stamp" in each sheet depicted the national flag and coat of arms of the named country. The appropriate flag and arms were depicted on the "stamps" from the 2 Commonwealth territories but the "stamp" of Niger, while depicting correctly the country's national flag (apart from the flag's proportions), featured not the arms of Niger but the coat of arms of Nigeria.
Easy mistake I suppose - here you are, appointed official philatelic agent for a country and charged with designing, producing, selling and making a profit from official items which bear the country's name and project its national image, and you can't even be bothered to identify correctly one of the most important symbols of that country's sovereignty. Still, I don't suppose anyone in Niger will be particularly bothered about it since it's unlikely that any of these "stamps" will ever find their way to a post office counter in Niger.
Stamperija's first omnibus issue:- 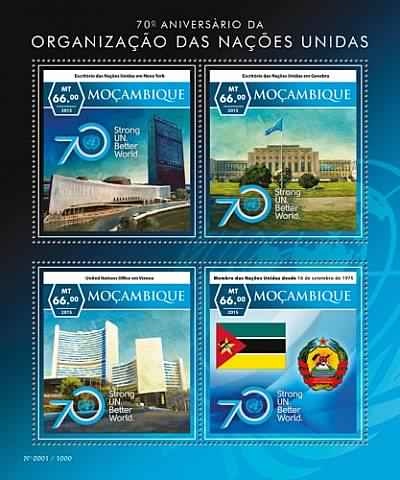 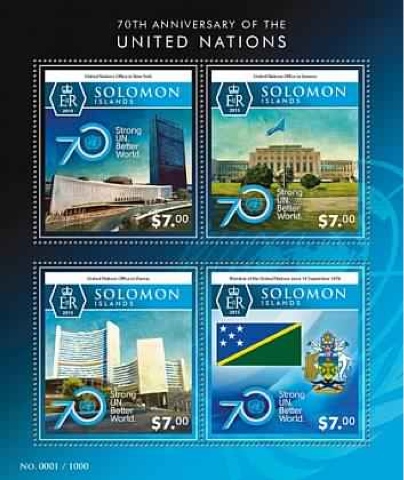 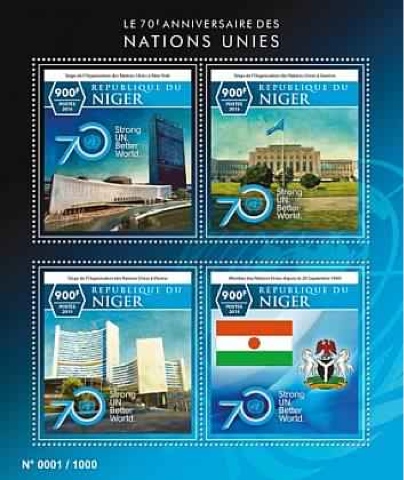 The coat of arms of Nigeria as shown on the above sheet from Niger:- 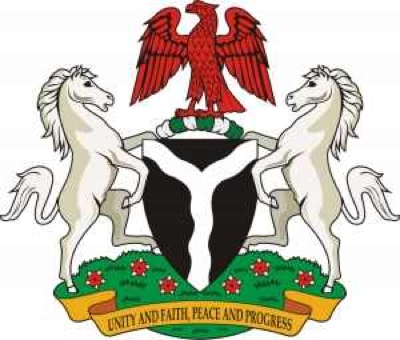 The real coat of arms of Niger:- 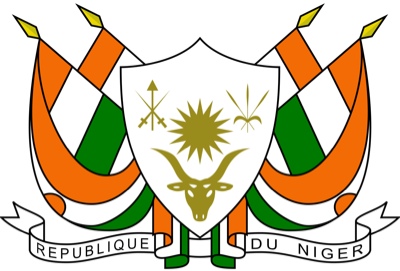 As mentioned in Blog 800, India Post's Rio Olympics stamps, issued on 5 August 2016, were issued in sheetlets which contained the stamps in different formats - as singles, as blocks of 4 and as strips of four. Why? 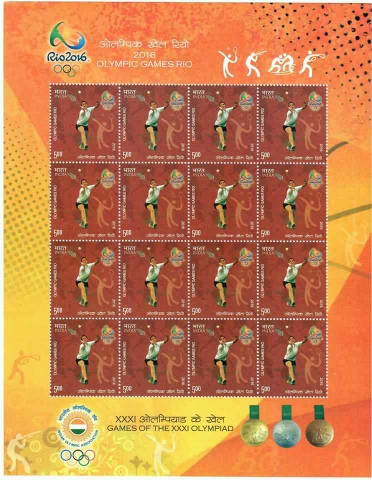 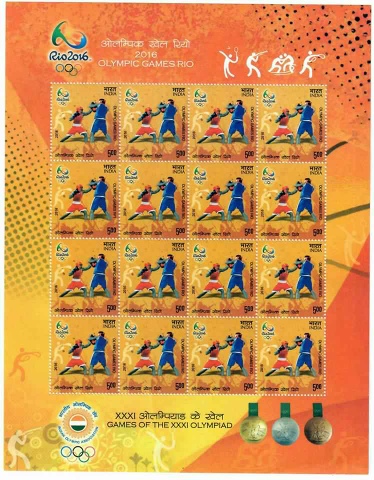 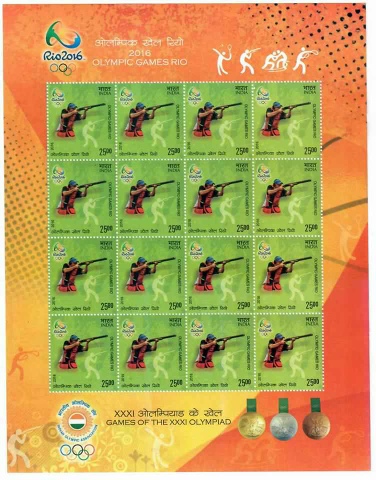 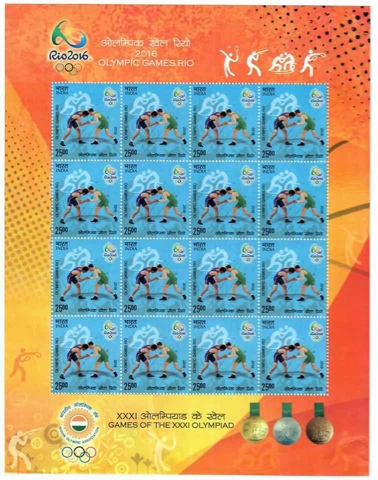 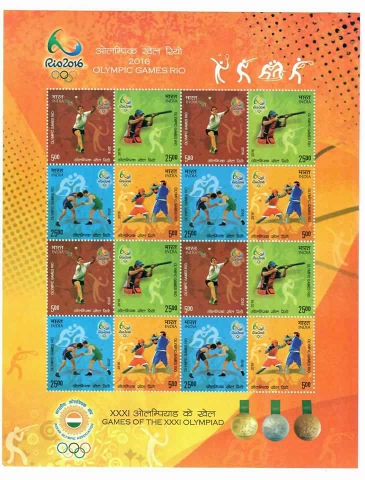 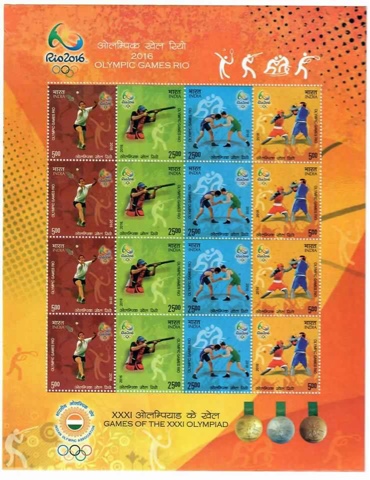 At least recent issues from India Post have been rather more interesting than some of the issues from earlier in the year - a set featuring orchids will be released on 8 August 2016 and will be made up of 6 stamps (2 x Rs5, 2 x Rs15 and 2 x Rs25) and 1 x Rs90 miniature sheet containing the 6 basic stamps.
Posted by White Knight at 23:54