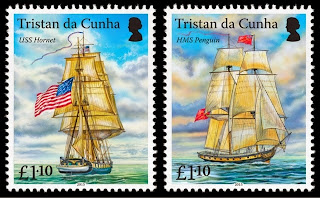 The Tristan Da Cunha Post Office will release a surprising issue on 1 June 2015 to commemorate the bicentenary of the fight between the USS Hornet and HMS Penguin, the final action to take place in  the War of 1812. The battle between the two ships took place off Tristan Da Cunha on 23 March 1815 by which date the war had actually come to an end.
In late 1814 the American Navy had prepared a small squadron of ships in New York with the aim of sending a force to attack British shipping in the Indian Ocean. The ship of the commander of the squadron was captured by British ships but the captains of the other American ships were not aware of this defeat and evaded the British blockade and arranged to meet off Tristan which was being used by the Americans as a cruiser base. Two ships arrived but were blown away by a gale and the Hornet alone reached the island on 22 March 2015.
As the Hornet prepared to drop anchor HMS Penguin was seen to the south-east. The 2 vessels exchanged broadsides for about 15 minutes. The British commander was killed and the US captain wounded. With the Penguin's masts damaged and 14 men killed its second-in-command surrendered the Penguin. Penguin was too badly damaged to be repaired and the Americans set fire to the ship. So ended the final engagement of the war - the American Senate had ratified the Treaty of Ghent on 18 February 1815.
The issue was designed by Robin Carter and lithographed by BDT International:- 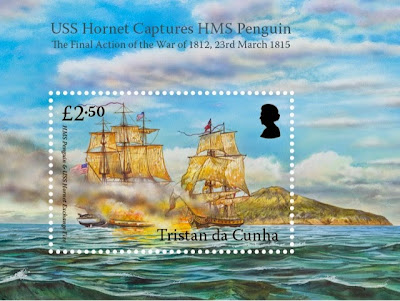 In Blog 377 my philatelic account of The War of 1812 had arrived at the point where the British had waged a successful campaign against the Americans which included attacking Washington and burning down the US President's residence, the White House, and then moving on to Baltimore in September 1814 which is where their successes ended as the Americans resisted the American assault on Fort McHenry (see also Blogs of 17 March 2012 and numbers 220 and 347).
By then Bonaparte had been defeated in France and exiled to Elba and the French and British had become allies. Britain ended the trade restrictions and impressment of American soldiers which, in addition to the American's lust to seize Canada, had been causes of the war between Britain and The United States. The war was in a stalemate and an end was brought to it by the Treaty of Ghent which was signed on Christmas Eve 2014.
Unfortunately, not yet knowing that the Treaty of Ghent had been agreed, the British invaded Louisiana  but were defeated with heavy losses by American forces under General Andrew Jackson at the Battle of New Orleans fought on 8 January 1815. Even then, as the above Tristan Da Cunha stamps illustrate, the War of 1812 had not quite seen its last engagement.
The US Postal Service issued a single stamp on 8 January 2015 to commemorate the 200th anniversary of the Battle of New Orleans. The stamp was designed by Greg Harlin and a portrait of Andrew Jackson is depicted on the reverse of the pane of 20 self-adhesive stamps.
. 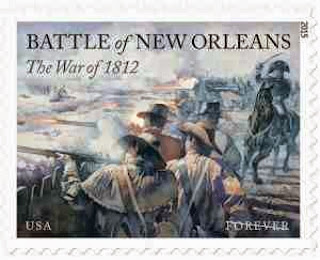 The War of 1812 played an important role in establishing a Canadian identity after the Americans failed to take over the territory and it is a pity that Canada Post has not issued stamps in 2015 to commemorate the end of this important period in Canada's history.

In Blog 481 I mentioned the set of 6 stamps and 1 miniature sheet which was released by Hong Kong Post  on 23 April 2015 on the subject of sports. The miniature sheet is illustrated below. The issue was designed by Cheng Kar-wai and lithographed by Cartor:-

Cyprus Post will issue 2 stamps and 1 booklet of 8 stamps on 5 May 2015 as its contribution to the annual Europa omnibus issue. The theme is "old toys" and the designs are by Costas Panayi and printing in lithography by Giesecke and Devrient Matsoukis SA of Greece:- 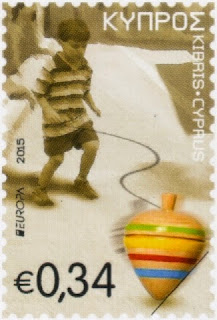 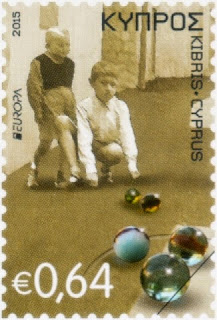 Jersey Post has announced yet more new issues. The first is to commemorate the 800th anniversary of Magna Carta and consists of 6 stamps and 1 miniature sheet with a total face value of £5.71p. The issue was lithographed by BDT International and will be put on sale on 15 June 2015:-

In the same month, on 27 June 2015, Jersey Post will then issue a set containing 14 stamps (cost £8.68p) as well as a "Prestige booklet"(cost £17.36p) to commemorate the holding of the 16th NatWest Island Games in Jersey from 27 June to 3 July 2015. In this era of excess it has proven necessary to issue a stamp to depict each of the 14 sports represented at the Games. The issue was designed from photographs by Andy Le Gresley and lithographed by Enschede. For those who have nothing better on which to spend their money Jersey Post points out that a complete set of sheets of 10 of each value can be bought at a price of £86.80p plus, if you live in The United Kingdom, value added tax - I might hold back on that one:- 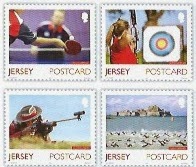 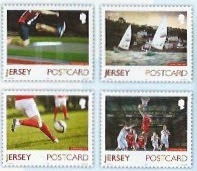 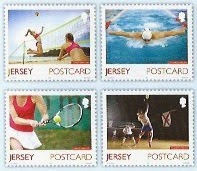 Collectors of Jersey stamps will be delighted to know that Jersey Post is planning to release another 8 commemorative issues before the end of 2015 plus, no doubt, numerous Post And Go labels with additional inscriptions applied to them.