545. New Post And Go's; Coronation of The Sultan of Johore.


In Blog 529 I reviewed the Intelligent AR Post And Go" kiosk-produced stamps and suggested that they represented a sort of "local stamps" because they were produced with location identifiers - the various museums in which the kiosks are located and, more interestingly, the Royal Mail Enquiry Offices in two towns which also house M series kiosks - M002, Crewe and M003, Bradford North. In fact the use of the M series kiosks in these 2 sites is only a trial - the date of the trial being given by Intelligent AR as 9 February 2015 to 31 July 2015.
With the change in British postal rates on 30 March 2015 two new "Post And Go" values were introduced - "Europe up to 100g" (£1.52p) and "Worldwide up to 100g" (£2.25p) - but in the case of the Crewe and Bradford North stamps the location identifiers had been removed so that the inscriptions "Crewe" and "Bradford N." no longer appeared on the stamps. These inscriptions had therefore only been in use for a period of less than 2 months. My hopes for an increase in locally relevant stamps seem to be dashed.
Meanwhile the 2 new "Post And Go" "...up to 100g" values are known in 4 designs (therefore producing 8 new stamps) - the Machin Head design with MA13 and MA14 codes, the "Symbolic flowers" designs and the Sailing ships stamps. Doubtless, further varieties will emerge.
I obtained a Collectors' strip of Symbolic Flowers stamps in the post office located in the Wilko shop in the centre of Sheffield which surprised me since all previous visits to use the 2 Sheffield kiosks had resulted in only Machin Head stamps being dispensed from the NMR kiosks there. The second kiosk dispensed the 6 Sailing ships stamps but with another surprise - there was an error of printing of the text resulting in only the left hand part of the inscription being printed. Both the Symbolic flowers and misprinted Ships stamps were bought in the mid-afternoon of 1 April 2015 and are illustrated at the head of this Blog.
We might add the cost of these 8 new values (£15.98p) to our list of the cost of 2015 Royal Mail new issues last updated in Blog 535 so that a new total of £219.72p is arrived at.
In fact, that is not quite everything since 2 more new varieties of definitive stamps have also been released with updated codes so that we must also add the 2nd class Blue definitive from "Business sheets" with M15L code (95p) and the 1st Large Orange definitive from retail booklets of 4 with MA15 MFIL code (54p) to our list of new issues released or to be released by mid-May 2015 which brings the total cost up to £221.21p:-

Botswana Post has released a set of 4 stamps which depict "National Floral Emblems". The designs depict Morshikiri (the national grass, P7.30), Morula (the national tree, P5.40), Sengaparile (the national flower, P8.00) and all 3 subjects (P3.50). The stamps were launched on 22 December 2014 by Lt Gen Seretse Khama Ian Khama, the President of Botswana:- 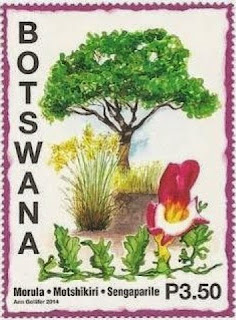 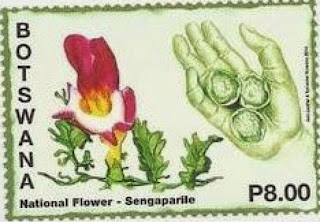 Pos Malaysia issued a set of 3 se-tenant stamps and 1 miniature sheet on 23 March 2015 to commemorate the Coronation of The Sultan of Johore:- 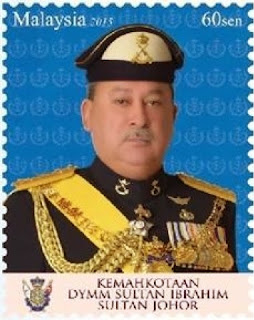 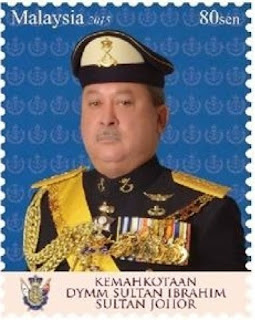 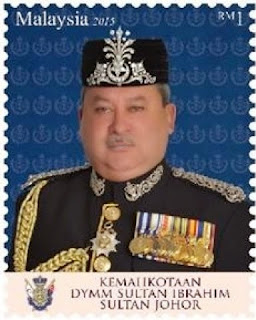 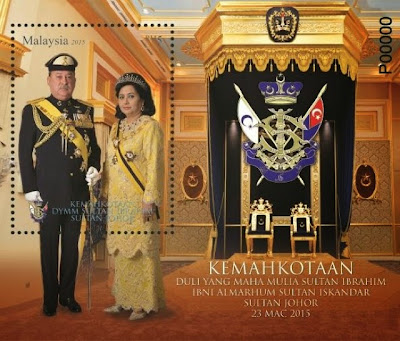