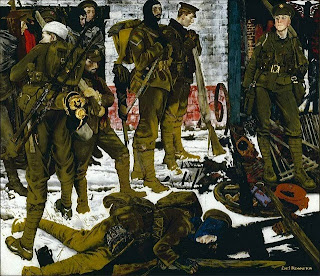 Images of the second set of 6 stamps to be issued by Royal Mail to commemorate the centenary of the First World War can be seen on the Internet. There are 3 x 1st class mail (63p) values in the set and the remainder each have a face value of £1.52p.
The first of the 1st class values depicts a painting of falling poppy petals by H. Hodgkin.
The second features the poem "All The Hills And Vales Along" by Charles Hamilton Sorley, a Scottish poet who was killed in the Battle of Loos on 13 October 1915 aged 20. Robert Graves described him as "one of three poets of importance killed during the war" (the others being Wilfred Owen and Isaac Rosenberg). Sorrel's only work, Marlborough And Other Works, was published posthumously in January 1916 (see also Blog 382, 445, 447 and 499D).
The final 1st class value shows a picture of  Rifleman Kulbir Thapa, the first Nepalese soldier (in the 2nd Battalion of the 3rd Queen Alexandra's Own Gurkha Rifles) to be awarded a Victoria Cross. In September 2015, though wounded himself, he stayed day and night with a wounded soldier of the Leicestershire Regiment behind the first-line German trench, and eventually rescued him as well as also rescuing 2 wounded Gurkha soldiers.
The first of the £1.52p values depicts a painting by Eric Kennington, an English artist, titled The Kensingtons At Laventie, Winter 1914. At the start of the war Kennington had enlisted with the 13th (Kensington) Battalion London Regiment and fought on the Western Front but was discharged as unfit in June 1915. The painting featured on the stamp was produced while he was convalescing and is a group portrait of his own infantry platoon, Platoon No. 7, C Company. The artist himself is the figure, third from the left in the full painting featured above, wearing a balaclava. The painting with its depiction of exhausted soldiers had a great impact on the British public when it was first exhibited in the spring of 1916. Kennington became an official war artist in May 1917. The painting is now on exhibition at the Imperial War Museum.
The second £1.52p value recalls the Gallipoli campaign of 1915 and the 3rd design depicts the London Irish Rifles' football from Loos. The story behind this is that at the Battle of Loos, Rifleman Frank Edwards, the captain of the football team, kicked a ball ahead of the troops of the 1st Battalion of the LIR as they were attacking No-man's Land to take enemy trenches. Now the memory of Rifleman Edwards and his comrades is commemorated every year at Connaught House, where the Regiment is based, on Loos Sunday.
Once again, Royal Mail has produced an excellent, tasteful and fascinating set of stamps in its commemoration of the centenary of the First World War and the sacrifices of the British and Commonwealth men and women who were involved in it. This issue is a must have for any stamp collection and helps to tell the story of the war alongside the excellent issues which are also being released by Australa Post and New Zealand Post.

Recently a number of IGPC issues have appeared for sale by a seller in Russia on an Internet auction site some time before they have been added to the IGPC website. Among the most recent products are items inscribed with the names of several clients of IGPC:-
Ghana:- 2015 - "Sunbirds of Africa" - 1 sheetlet of 9 different stamps and 1 miniature sheet. According to the excellent ornithological philatelic website, Birds of the World on Postage Stamps, only 4 of the 10 featured species are actually found in Ghana:- 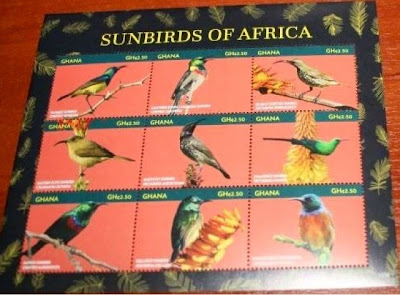 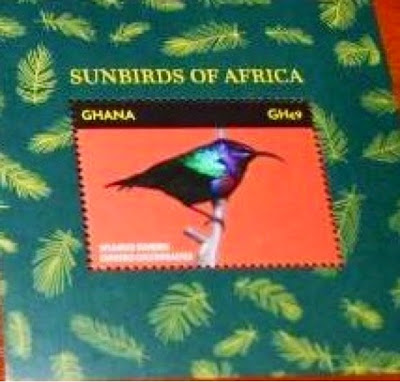 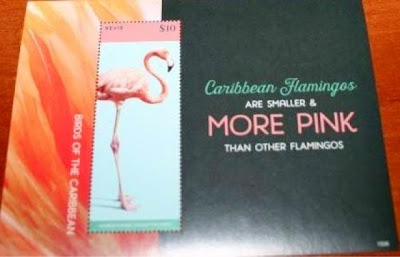