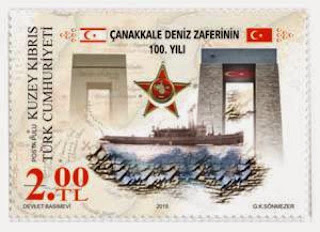 The events at Gallipoli in 1915 are usually depicted from the British-Australian-New Zealand perspective in a collection of Commonwealth stamps but, as mentioned in Blog 541, an opposing viewpoint was given in a single stamp issued by The Turkish Republic Of Northern Cyprus on one stamp which commemorated the centenary of the Turkish naval victory at Gallipoli. The stamp, depicted above, was designed by GK Sonmezer and printed in lithography. Stamp collecting can certainly broaden one's understanding of the world and help one to realise that history does not necessarily have a single way of seeing past events.
These points are made equally by another new issue, this time from the postal administration of The Republic Of Cyprus, which is part of a joint issue with Armenia and which recalls another event of 1915 which involved Turkey - then The Ottoman Empire - namely the terrible massacres of the Armenians who lived in Turkey, massacres which widely have become called a genocide. The Cypriot stamp depicts the Melkonian Orphanage in Nicosia/Lefkosa which was founded in 1926 to house 500 orphans of the massacres:- 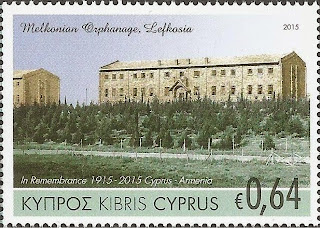 It is also interesting to depict the stamp issued by Armenia as its contribution to this joint issue (even though it is not a Commonwealth issue) - the design shows a photograph of the first Armenian orphans to find a home in the orphanage. They are dressed in uniforms and lined up with the school band:- 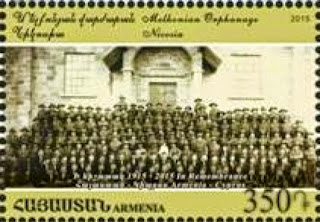 Presumably, while The Republic of Cyprus' participation in this joint issue is a way of expressing solidarity with, and sympathy for, the Armenian victims of the 1915 massacres, the issue of the stamp is also a way of publicising philatelically The Cyprus Republic's continuing resistance to the Turkish occupation of northern Cyprus and the existence of the Northern Cyprus Republic. Identifying itself with the victims of the terrible events affecting Armenians in Turkey 100 years ago is an effective way of drawing attention to Cyprus' own feelings about Turkey and what better medium is there to do so than stamps?

Sri Lanka Post issued 1 stamp on 20 March 2015 to commemorate the 150th anniversary of the National Hospital of Sri Lanka:- 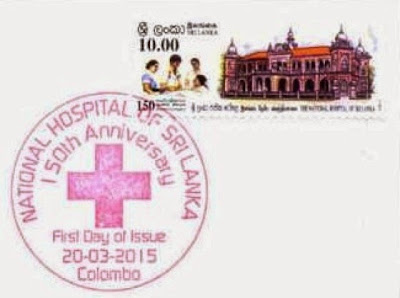 Another version of Royal Mail's "Post And Go" stamps with the 2 new tariff values of "Europe up to 100g" and "Worldwide up to 100g" has been offered for sale on an Internet auction site recently.This time it is a "Collectors' set" composed entirely of Poppy stamps. In Blog 545 I reported that I had obtained the new tariff values on the "Symbolic flowers" set from the post office in Sheffield city centre and that of course included the poppy design but the item offered for sale recently was the "poppy only" strip first issued on 21 October 2014 in the run-up to Remembrance Day but with the 2 new values.
Thus we have yet another version of the new tariff stamps and to fully demonstrate the difference between these and the symbolic flowers stamps of 6 different designs I guess that collectors need to add a complete strip of the poppy stamps with new values to their collection at a cost of £7.68p making the running grand total cost for Royal Mail issues in 2015 so far listed up to £228.89p.
It is interesting to note that one of the values in the strip (Worldwide up to 20g) depicted below has a misplaced inscription. As mentioned in Blog 545, I also obtained collectors strips with misprinted inscriptions from one of the 2 kiosks in Sheffield and I can not help feeling that there must be plenty of "Post And Go" stamps around with misprinted inscriptions which makes them vaguely interesting but hardly of any great value.

On 4 April 2015 I visited the Pinfold Street post office in central Birmingham and obtained a Collectors' strip of the Machin Head "Post And Go" stamps with MA14 code with the new tariff values included in the strip. I was told that this was the only stamp design being dispensed from any of the kiosks in that post office. It has been reported previously that the Machin Head design stamps with new tariff are also being sold with MA13 code. 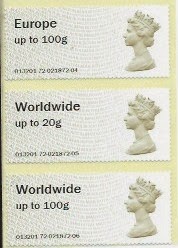 The New York-based philatelic agency, IGPC, will issue 1 sheetlet of 4 different stamps and 1 accompanying miniature sheet on the subject of "Roses" on 20 July 2015 with the name of one of its client territories, in this case Montserrat, printed on the items:- 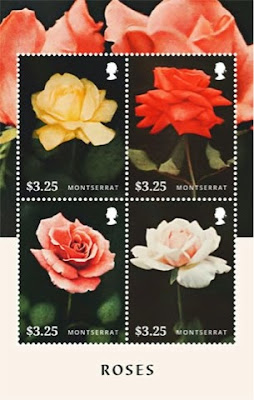 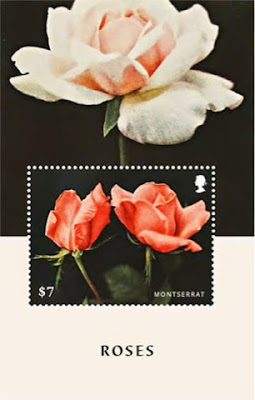 It's a strange (philatelic) world - I was recently walking with my dog across some fields in the countryside local to where I live when 4 muntjac deer suddenly appeared and ran in front of us away across the field with the dog in hot pursuit. They easily outran her but it was quite interesting to see these creatures suddenly appear within a few score yards of the edge of Britain's second city, Birmingham (though I have seen them well inside the city boundary before). I was reminded of this when looking at one of the stamps issued in a sheetlet of 10 by Bhutan Post during 2014 which I have just added to my collection. The set depicts "Flora and Fauna" of Bhutan, with its mountains and forests, and there, staring out at me from one of the stamps, was a Muntjac in its native home unlike those which had appeared on our walk in the northernmost tip of Worcestershire. Round my way the muntjac is an introduced species but looks just at home as that which appears on the new Bhutanese stamp. 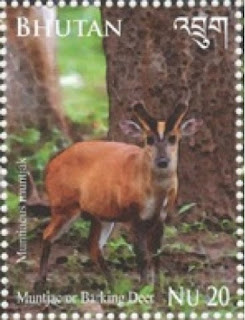 Despite the muntjacs' appearance in the centre of England, I am not expecting to bump into some of the animals which are featured in the Bhutanese sheetlet such as the Himalayan Black Bear:- 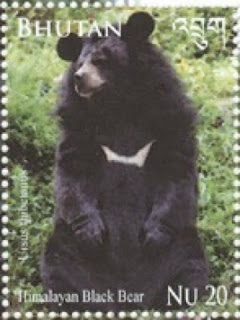 Nor do I expect to see a Red Panda moving about the trees of one of the local woods:- 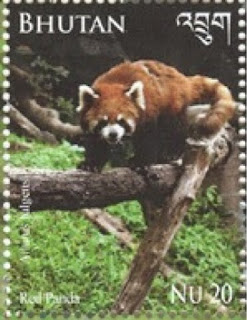 Likewise, I do not have great expectations of viewing a Golden Langur in the local woods:- 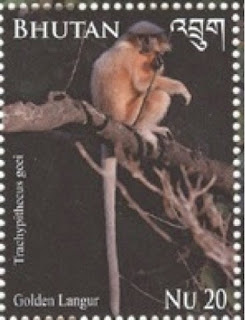 But on the other hand, we do seem to have plenty of primulas:- 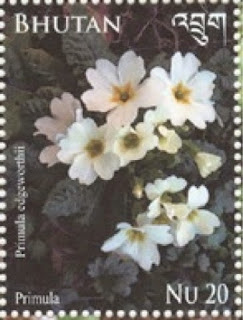