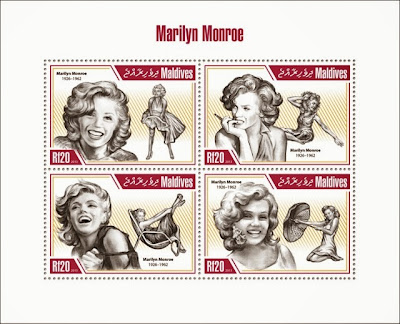 This issue alone suggests that the Stamperija productions for Maldives are more philatelic collectables rather than true postage stamps even if they do theoretically have postal validity. Perhaps local sales are aimed at the tourists who visit Maldives and are for sale at the philatelic counter rather than at ordinary post offices.
The details of the new "issues" are as follows -
25 October 2013 - "Flora and Fauna of Maldives" - 10 sheetlets, each of 4 different stamps, and 10 accompanying miniature sheets, each combination of 1 sheetlet and 1 m.s. being devoted to a different subtheme which are:- Water birds, Tropical butterflies, Short eared owl, Saltwater crocodiles, Protected marine species, Orchids, Lizards, Fruit bats, fish and Birds of prey. The set depicting saltwater crocodiles is, I'm sure, a particular delight to the foreign tourists who visit the islands and who will enjoy being reminded that such creatures may be lurking there when they are frolicking in the sea. 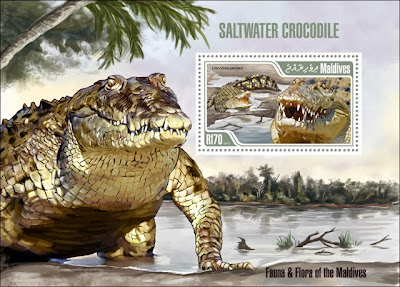 18 November 2013 - "Celebrities" (none of them Maldivians) - 10 sheetlets of 4 different stamps and 10 m.s. depicting Elvis Presley (inevitably), the Birth of Prince George of Cambridge, 40th anniversary of the Spanish artist Pablo Picasso, 95th Birthday of Nelson Mandela (former South African president), 85th anniversary of the assassination of Mahatma Gandhi (Indian statesman), 50th anniversary of Valentina Tereshkova as the first woman in space, 70th anniversary of the birth of Bobby Fischer (US chess player), Confederations Cup (Football) held in Brazil in 2013, Marilyn Monroe and 150th birth anniversary of Pierre de Coubertin (Founder of the Modern Olympic Games). Many of the designs are very poor with some of the "celebrities" on the stamps being barely recognisable from the black and white illustrations which constitute the stamp designs. 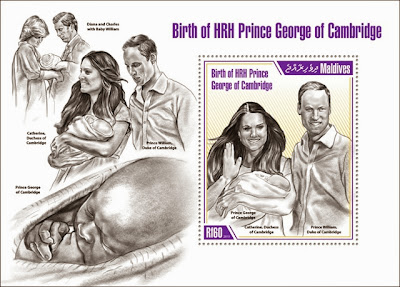 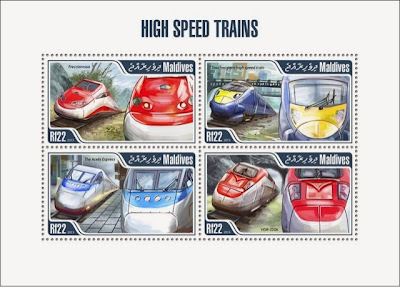 Needless to say, I view all of the above as "Footnote issues" and will not be adding any of them to my collection of Maldives stamps. But I shall be interested to see if there is any fall out in Maldives and elsewhere from the production of the provocative Marilyn Monroe items.