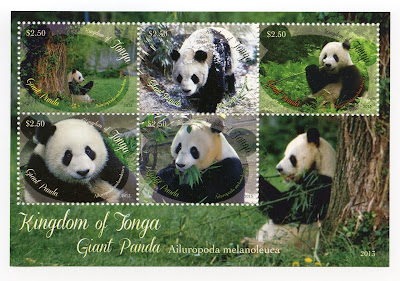 A recurring theme of recent blogs has been the increasing number of stamp issues released by Commonwealth countries which are aimed at the philatelic market in China. In the previous Blog I suggested that even Royal Mail was choosing subjects to include in its new issue programme which related to Chinese subjects such as the Chinese New Year of the Horse. Very frequently, stamp issues on Chinese subjects are being produced by the Chinese authorities and given to various small postal administrations for them to sell to collectors.

The US-based postal agency which manages the stamp issues of Cook Islands, Tonga and Samoa has shown itself to be very prepared to accept such items from China in the last couple of years or so and many stamps from those territories seem to have more to do with China than with the South Pacific territories themselves. On 26 September 2013 a sheetlet of 5 stamps is said to have been released by Tonga (see above) along with a second sheetlet of 2 stamps (depicting a Chinese landmark and a painting by Paul Gauguin) which has a picture of the Great Wall Of China in its large lower margin. The latter specifically commemorates the China International Collection Expo 2013 as presumably does the giant panda sheetlet. I did visit Tonga a few years ago and I can confirm that there are no giant pandas in Tonga! Why, you might ask, is Tonga issuing 5 stamps which depict the creature? Answers on a postcard please..... 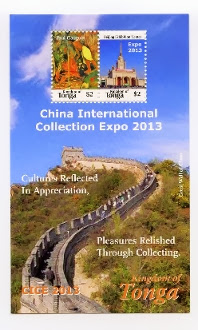 The Tonga Post Office also feels the need to allow a similar Great Wall of China miniature sheet to be produced in its name but with the inscription "Niuafo'ou", this time with a different Gauguin painting depicted on one of the stamps:- 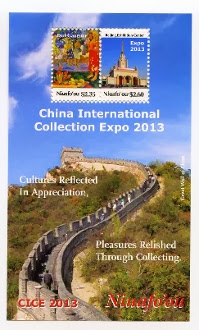 Of the 3 territories which have allowed Philatelic Collector Inc. to take over their stamp issuing, Samoa seems to be keeping a tighter grip on what is being done to its philatelic reputation than the others. Thus there is to be a very modest and restrained Christmas issue for 2013 which wasreleased on 8 November 2013 and consists of just 2 stamps in values which actually represent local postage rates:-

One stamp and 1 miniature sheet were issued on 17 September 2013 to commemorate the local Teuila Festival. My problems with this issue is the fact that the miniature sheet contains three $10 stamps and for some reason was issued 10 days after the end of the festival which seems to make the stamps rather redundant. Still, the stamps are colourful and attractive and are locally relevant so I shall find a place for them in my collection:- 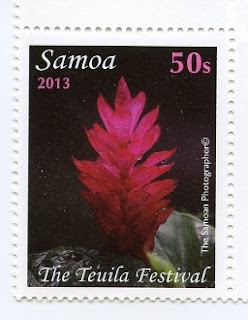 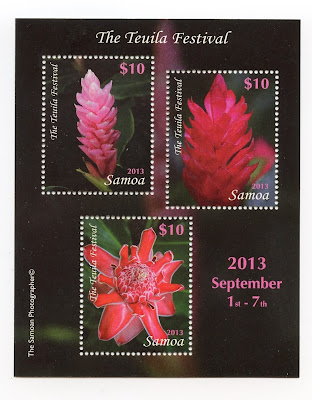 Unfortunately Samoa has also issued a Great Wall Of China sheetlet (on 26 September 2013) similar to Tonga and again there is a Gauguin painting depicted on one of the stamp designs. I think this is meant to represent South Pacific culture except of course Gauguin was a Frenchman who visited what is now French Polynesia for a while and I have not found anything that says he visited either Tonga or Samoa. So I view all of these items as "Footnote" issues and they do not have a place in my collection. 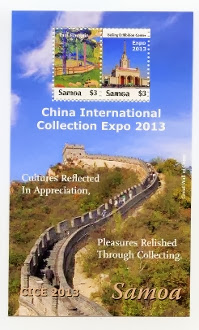 And so, to The Cook Islands. A fairly modest 3 value Christmas set, designed by Alison Ditko, is to be released consisting of fairly low face values. Unfortunately this set is supplemented by a 3 valued miniature sheet. I have not seen anything to say that Christmas stamps will be issued with the additional inscription of Aitutaki or Penrhyn.

We should not be surprised that Cook Islands is also involved in the Great Wall of China sheetlet issues. Another Gauguin painting though again I have not found anything to say that he visited The Cook Islands. Three sheetlets are being issued on 26 September 2013 with one inscribed "Cook Islands" and the other two with additional inscriptions for Aitutaki and Penrhyn. I view them all as Footnote issues and shall not be bothering with them.
Interestingly, the British philatelic publication, Gibbons Stamp Monthly, does not appear to have any concerns about the number of philatelic items emanating from this particular postal agency and is giving free samples of some values of the recent Samoa definitive set with its December 2013 edition and gratefully acknowledges the agent's participation in the promotion. This is despite the fact that the Stanley Gibbons Catalogue editor wrote recently in the magazine's Catalogue column that Catalogue editors, including himself, should have possibly been less willing to list excessive issues in their publications. However, that was obviously only a passing thought since even in the latest edition of Gibbons Stamp Monthly, he has shown no hesitation in giving catalogue numbers to numerous philatelic items produced with the name of The Gambia printed on them, said to have been released between 25 September 2012 and 3 June 2013 and which moves the catalogue numbers on from 5514 to MS 5568 (this numbering gives no indication that most items are multistamp sheetlets rather than miniature sheets). 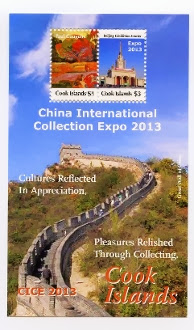