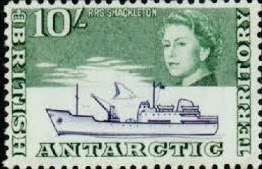 A notice was published on the Gov UK website on 17 October 2013 giving notice that the contract for the production of the stamps of British Antarctic Territory was under tender and that agents interested in taking on the work should submit their bids by 29 November 2013. The contract is currently with CASCO and expires on 26 March 2014 and one may expect that other agencies would want to be awarded the contract. A number of British territories in the South Atlantic and Antarctic area - Falkland Islands, Ascension, South Georgia And The South Sandwich Islands and Tristan Da Cunha - have already put the production and marketing of their stamps in the hands of Pobjoy Stamps and Creative Direction (Worldwide) Ltd. May we see yet another highly popular territory having a new philatelic agent in 2014? Presumably the territory's philatelic future will not be handed over to one of the more exploitative agencies (you know which ones I mean) so I think polar stamps collectors can be fairly relaxed about the news of the renewal of philatelic contracts.

Papua New Guinea's new issue programme has been somewhat disrupted this year and changes have been made to the planned programme so that the latest issues were released on 21 August 2013 when 4 stamps and 2 miniature sheets on the subject of "Coconuts" appeared and 11 September 2013 when 4 more stamps and 2 miniature sheets commemorated the birth of Prince George Of Cambridge:-

Jersey issued 6 stamps and a miniature sheet on 15 October 2013 to commemorate the former racing car driver Nigel Mansell. The Jersey Post Office justifies the issue because Mansell is now a resident of the island. Mansell seems to move around rather a lot - a few years ago he was featured on a set of stamps released by The Isle Of Man when he was a resident of that island. Probably he finds the climate in Jersey to be rather more pleasant than that of the windswept, rain-soaked island in the Irish Sea though both islands are tax havens so I'm sure both islands have their financial attractions for him. 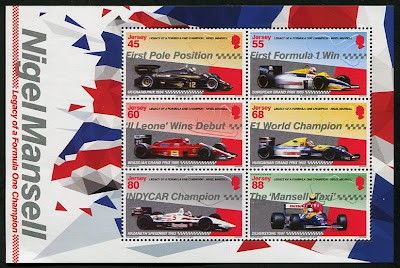 Jersey has also discovered that it needs a £4 stamp and has chosen the occasion of the 65th birthday of HRH The Price Of Wales as an excuse for issuing such a high valued stamp. At least it makes a change to see the Prince's portrait on a stamp rather than that of his first wife, the late Diana, Princess Of Wales, who is frequently portrayed on stamps particularly from the more exploitative philatelic agencies. Not content with extracting £4 from collectors for this item, there will also be an accompanying £4 miniature sheet - so, good news for greedy little Jersey - double the profits! I'm just surprised that they didn't issue a £65 stamp to match the Prince's age.
The stamp and miniature sheet, designed by the ever busy Andrew Robinson and lithographed by Cartor, will be issued on 14 November 2013;- 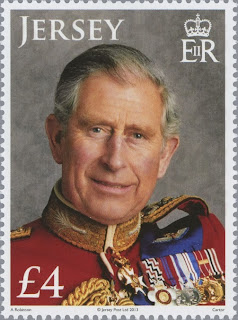 Jersey will also issue a £1 miniature sheet on 14 November 2013 which will depict the Jersey Royal Mace which was originally presented to the island by King Charles II on his restoration to the throne of England in 1660 in recognition of the island's loyalty to the Crown during the English Civil War. The sheet was designed by Andrew Robinson:-