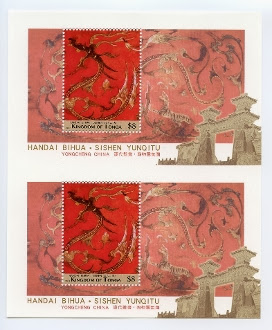 Tonga's philatelic agent, based in The United States, has added news to its website of a curious issue said to have been released on 15 October 2013 and produced by The People's Republic Of China (no more details than that) which is on the subject of "Handai Bihua - Sishen Yunqito". The issue comprises 2 identical miniature sheets joined together each containing a single identical perforated stamp. The stamps appear to depict a dragon and at the lower right edges of the miniature sheets there is a depiction of an old Chinese gate. The philatelic agents give no explanation of what this item is all about, possibly because they do not know themselves but I wonder if it is issued in connection with a philatelic exhibition in China. Does anyone know? Whatever it is all about, it doesn't seem to have any relevance to Tonga so I am sure that I can safely omit it from my collection.
From the same agents comes a stamp issued by The Cook Islands on 18 September 2013 which depicts the Penny Black stamp. As I have mentioned in a previous Blog there does not appear to be any reason to issue such a stamp except that each one sold adds another $8 profit to the philatelic agent's bank account:- 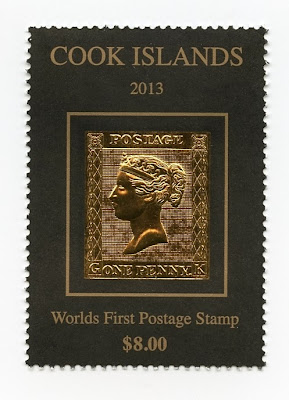 Guernsey - While the United Kingdom's Royal Mail postal service has found it necessary to issue as many as 9 different stamps for use on its 2013 Christmas mails (Blog 321), the offshore island of Guernsey seems to think that no less than 14 different stamps are needed by its public for their Christmas postal needs. The Guernsey postal administration has issued 7 stamps on the subject of Father Christmas getting stuck up a chimney, all very amusing, and then another 7 stamps with the added inscription of "Alderney", part of The Bailiwick of Guernsey, which feature "Rudolph The Red-nosed Reindeer". The designs were made by Nick Watton and all 14 stamps were lithographed by Cartor. The date of issue will be 13 November 2013:-


Guernsey will also issue another set of stamps on 14 November 2013 to commemorate the 25th Chelsea Flower Show Gold Medal award to local horticulturalist, Raymond Evison. The set is comprised of 6 stamps and was designed by Two Degrees North and lithographed by BDT International. Well I suppose the stamps make a change from sporting Gold Medal issues of which I've seen quite enough in the past year:-


Grenada appears to have issued what looks like a new definitive set on a so far unspecified date. I have seen illustrations of 11 values so far and they all seem to depict parrots which are clearly not native to Grenada since there are no resident species of parrot on the island (a total of 4 different species are found on the neighbouring islands of St. Vincent, Saint Lucia and Dominica but that still leaves 7 featured species from outside of Grenada"s immediate region) ) and this begs the question of why such a subject was chosen to be shown on the country's definitive series. Clearly "parrots on stamps" must be a popular theme at present and Grenada's US-based philatelic agents see these stamps as a money spinner.
It poses me something of a dilemma since I usually do not buy stamps from certain countries such as Grenada if their subject matter has no relevance to those countries but on the other hand I do buy the various countries' definitive stamps in the belief that they at least are likely to actually get used on local mail. I shall have to think about that problem.

I have also seen illustrations of the sheetlet of 4 stamps and accompanying miniature sheet which commemorate the 60th anniversary of the coronation of the Queen of Grenada, Queen Elizabeth II:- There is also a sheetlet of 4 stamps and a miniature sheet which depict very unconvincing pictures of "Wild Cats":-

and a miniature sheet which depicts a particularly unappealing domestic cat (doubtless, a sheetlet containing several other stamps was also issued alongside this single value m.s.):- 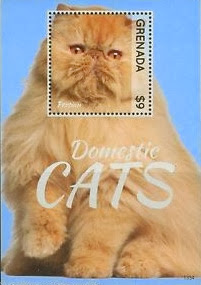